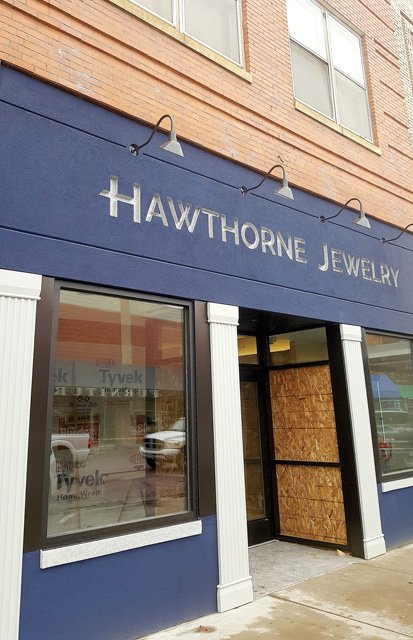 Hawthorne Jewelry’s new façade to commemorate 140 years in business this year.Not many jewelry store owners can claim their store opened the same year Thomas Edison was granted a patent for the gramophone (phonograph). That’s a boast Erika Godfrey, president and owner of Hawthorne Jewelry, can make as she and her staff celebrate 140 years in business this year.

Your average Midwesterner isn’t braggadocios, but Erika’s pride in her family’s business runs as deep as her passion for jewelry retail. A zeal she recently discovered when sifting through old documents, letters and photographs, she shares with J.D. Hawthorne, the founder of the Kearney, NE-based jewelry store,

Since the store’s opening in 1878, Erika and previous generations have been saving items of historical significance as they relate to her family’s jewelry store. As luck, timing and pure serendipity would have it, a store visit from the founder’s great-granddaughter became part of the milestone anniversary celebrations this summer.

Based in San Jose, California, two years ago the founder’s great-granddaughter happened to see a Hawthorne’s Jewelry Christmas catalog left at a table in a local restaurant. Curious, she called the Nebraska store and eventually spoke with Erika. The two initiated contact, then things went quiet for about a year. During the store’s 140th anniversary year, Erika and the original founder’s distant living relative re-connected with phone calls and a store visit.

“It was so incredible to meet someone who knew the original owner that opened the store in 1878,” says Erika. “She presented us with old documents, letters from the original owner and customers, as well as old photographs. When I read them I discovered the original store owner and I have a similar passion for retail jewelry for many of the same reasons. The only difference is 140 years.”

The flame of the family generational torch, however, was nearly extinguished when Erika started working at the family’s jewelry store in high school. “It lasted two weeks and then I left,” says Erika.

Back then as today, Erika considers herself a very determined and strong-willed person. Being told what to do by her father at home and at work “wasn’t working out.” But when her father made overtures of selling the store in Erika’s early twenties, she became the most vocal and determined advocate for keeping the business in the family. 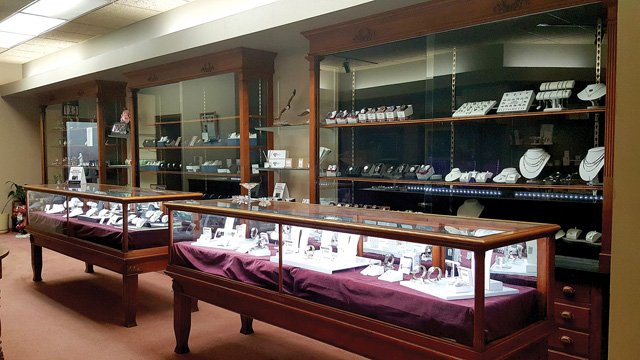 Hawthorne Jewelry is known for their traditional, wood display cases.

“When I was older, I started to think back about how much the store was talked about around our home,” says Erika. “It was constant. Our family has poured so much blood, sweat and tears into this business. It has provided for our family and so many others. Because of that and the many, many customers we’ve served over the years and their memories, this store has its own heartbeat. I call this store ‘my box,’ and in it are that heartbeat and all those family and customer memories. I just couldn’t let that go.”

For 26 years and counting, Erika has welcomed being part of the three percent. It honors and pays homage to a family tradition of serving Kearney since the days when the small Nebraska town was a central hub for the then bustling railroad. When J.D. Hawthorne opened for business in 1878, he sold jewelry and was the town’s optometrist, selling, servicing and repairing eyewear.

Old store documents show ad slogans and tag lines about being the town’s “old reliable jeweler” selling gold and silver jewelry as well as watches and eyewear. “Train commuters would stop here and walk around town,” says Erika. “Back then J.D. was the only such business owner in town. Train commuters wanted to buy a little something special on their journey, get their glasses fixed, you name it.” 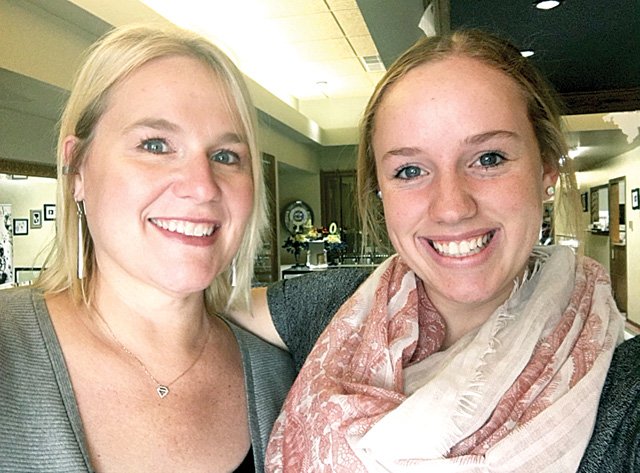 “Grandpa was the watchmaker and did watch and jewelry repairs, while grandma was the accountant, jewelry seller and designer, and face of the family business,” says Erika.

Like father like son, Erika’s father started with jewelry repairs and expanded his role in the store’s day-to-day operations from that point. Erika’s mother Phyllis Kendle didn’t join the family business until her grandmother Vivian Kendle died. Phyllis took over many of Vivian’s day-to-day duties.

Kearney has gone from a railroad hub and small farming community to a large town of roughly 32,000 people. Today it is home to the University of Nebraska at Kearney. Agribusiness interests, electrical and industrial power management company Eaton Corporation and large, reputable hospitals also fuel the local economy.

In many ways, Hawthorne Jewelry has evolved over time as well. And, in other ways, it hasn’t changed at all. “We’ve always been a downtown store,” says Erika. “Even when shopping malls took away from downtown shopping in the 1980s, we stood firm. My father Albert Kendle, III bought out the adjoining retail space and we expanded the store in 1982. To commemorate the store’s history we’re building a new façade, a significant investment to mark 140 years in downtown.”

Another timeless characteristic is the quality of diamonds and jewelry associated with Hawthorne Jewelry. “Historically, and this goes way back, we’ve always carried precision-cut, high color, better quality diamonds,” says Erika, “That hasn’t changed, but we do try to carry a wider range of quality diamonds to suit many tastes and budgets, including lab-grown diamonds.”

And, the precedent breaker favorite for Erika, no more evening hours. “My father always worked late,” says Erika. “I hated that.”

To keep Hawthorne Jewelry current under her watch, Erika is marketing – mainly with television – to outlying markets, trying to attract customers from 25 to 50 miles away. Investing in jewelry from fashion to fine, diamond buying trips to Antwerp and upping the ante with custom work and repairs have been winning strategies.

Celebrating 140 years in business says a lot about Hawthorne Jewelry’s history. But the future of a multi-generational family is only as promising as the next generation’s willingness to keep it all going. Erika’s brother Steen Kendle, a certified bench jeweler technician, came to the store in the late 1990s, and is “one of the best and only bench jewelers in town,” says Erika. “He has two very young kids that might one day show an interest in working at the family store.”

Erika wants her “box” to continue to have a heartbeat and be a storage place for past, present and future family and customer memories. Erika’s oldest daughter Ella Godfrey, 18, is currently enrolled in chemical engineering courses in college. “So that’s not happening,” says Erika.

Her younger daughter Kaitlan Godfrey, 16, works at the store. According to Erika, Kaitlan shows great potential, interest and enthusiasm for jewelry retail. For Erika, she wants Kaitlan to have the same opportunities she had with her father, to join the family business on her own terms and learn from a patient, parental mentor by trial and error.