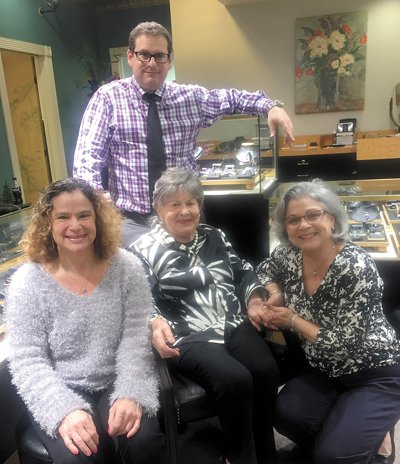 What drives a 65-year-old woman to ditch retirement, go in debt for hundreds of thousands of dollars and start a brand new jewelry business? Just one thing – strength.

Helen Colin, owner of The Jewel Box in Houston, TX is a Holocaust survivor who’s looked evil in the eye and not only survived, but created one of the only third generation, female-owned retail businesses in the industry. If heroes truly are “ordinary individuals who find the strength to persevere and endure in spite of overwhelming obstacles,” (Christopher Reeve) then Helen is a hero among heroes.

Below is a brief excerpt from a 2012 Houston Chronicle article on Helen by B.J. Pollock:

‘Colin said the tiny room her family was assigned lacked running water and food was scarce. Bodies of those who starved lay in the streets. The survivors were forced to make supplies for the Nazis. Several families shared an outdoor toilet.

“We were never given a piece of soap or a toothbrush,” she said, her native accent still very much evident. “My poor father was forever looking for food for us – there were four children – a piece of bread, a carrot. I could see he was shrinking, but what could I do?”

As soon as curfew was lifted the next morning, my sister took me by the hand and, without saying a word, we went to the morgue,” Colin said. There, she said, they found “rows of people on top of people.”

When Colin recognized her father’s toes, she and her sister began dragging bodies off, laying them from side to side, until they reached him. Weak from hunger, the girls were only able to dig a shallow grave for their father, a memory that still brings tears to Colin.’

The Texas jewelry retail owner was just a teenager in Poland when the Nazi’s invaded, captured and placed the Jewish people in an area called the Lodz Ghetto. With more than 230,000 Jews in one place, the Ghetto was eventually incorporated into the Third Reich in 1939.

But something good came out of her horror. In 1944, while imprisoned, she met and married her husband of more than forty years, Kopel Colin, before being sent to Auschwitz.

Their wedding was, well, unusual. Other couples were married at the same time in a group ceremony, and each couple received an extra piece of food as a wedding gift. But the newlyweds were soon separated as Helen and her sister were moved to Bergen-Belson Concentration Camp.

When liberation finally came in 1944, Kopel searched for his new bride going camp to camp asking if anyone knew her. When he found her he was overwhelmed to also find her sister and his brother, all located in the same camp. Helen’s mother and youngest sister never made it out.

Free at last, they fled Poland. They fled the memories, the pain and past, and made their way to America. Eventually settling in Houston, the Texas climate demanded Kopel find a new profession, as furriers weren’t in high demand.

The couple decided to open a jewelry store, which they named Colin’s Jewelry. Together they ran their store for nearly 30 years until they retired in the mid-eighties.

Kopel enjoyed retirement but ‘Helen the Hero’ wasn’t ready to quit. At 65 years old she started over with a new location, a new name and new loans, a risk most of us wouldn’t dare take.

“My mom’s vision for her (new) store was different than what she and my dad had created in Colin’s Jewelry,” recalls Muriel Colin Meicler, daughter of Helen and Kopel. “She was a person willing to take risks. She has seen the worst the world has to offer and enjoys making people happy.”

Even her new location was a risk. Choosing unconventional medical office space meant convincing not only her family, but also the leasing company, that her new business would be successful and fit in to the medical landscape well.

Granddaughter and Jewel Box employee Michele Meicler explains that, “we often have people who come in between doctor appointments or while waiting on loved ones and we offer a bright spot and fill a need for them.” Even if they don’t buy a thing, people come in and leave as friends.

Kopel passed in the mid-nineties leaving Helen, her daughter, her granddaughter and her nephew Shane Kolin to run the business.

While her store kept her busy, she always found the time to speak of her Holocaust experience to anyone who asked. Telling her story brings back the trauma, but she persists, speaking to school groups, civic organizations and anyone else who’ll listen. Even 70 years later the horrifying memories still make her cry, but this amazing woman is stronger than precious metal forged in the fire.

In 2013, at age 90, she published her memoir called “My Dream of Freedom; From Holocaust to My Beloved America,” available on Amazon. Wanting not to be seen as a victim, but rather as a survivor, Helen donates 100% of the proceeds to the Holocaust Museum in Houston.

Helen explains: “To come to this great country of America is the best gift anyone can get. I don’t know whether I deserved it, but God blessed me with the chance to live in this country and educate my children here, my grandchildren and now my great-grandchildren.”

Retired once again, perhaps for good this time, Helen still finds it difficult to comprehend the hatred and cruelty she experienced during the Nazi take-over. The impact of that evil reshaped her view of life forever, as seen in her affectionate reference to strangers as “my darling.”

She sums life up this way: “Always respect others and pass a little peace around.”

To view video of Helen speaking at the Holocaust Museum in Houston visit https://www.youtube.com/watch?v=g9z7rTsqUgk