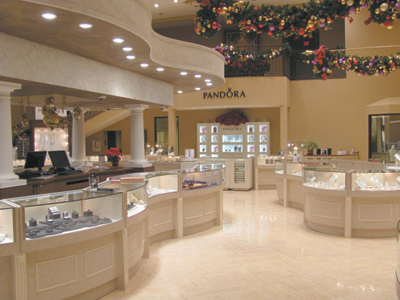 The interior of Anfesa’s Jewelers 8,000 sq. ft. jewelry store. The store was previously located in a 1,200 sq. ft. space in a strip center.

“We were in a strip center in Garner for years, and I always wanted to have my own building,” says Anfesa Matthews, owner of the store just outside Raleigh, North Carolina’s capital city. “I’d been looking for the right location, and I wanted to stay in Garner. But I couldn’t find any land available in prime spots.”

Commercial property owners wanted to lease, not sell, she says. Finally, after many years, a space became available, and Anfesa built her new facility just about a half-mile from the old store. “We’re in a prime location on Highway 70, and 40,000 cars go by the building each day. It’s great.

“We’re seven minutes from downtown Raleigh. I tell people we’re closer to Raleigh than Raleigh is,” she laughs.

“We’re half a mile from I-40, so it’s great access. We’re in a business park, with banks and offices, and I was concerned about being the only retailer out here. My business is in the middle, and it’s very private. Even though there’s a lot of traffic, it’s not as busy on the weekends. I was a little worried about that, but it’s working.” 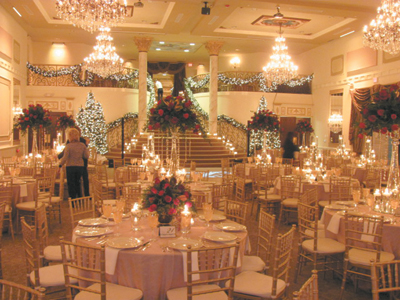 The ballroom at Anfesa’s Jewelers in Raleigh, NC . Owner Anfesa Matthews built the facility in 2009. It includes a jewelry store, day spa and luxurious ballroom.

With its September 2009 grand opening attended by 750 people, Anfesa’s grew from its original 1,200 square feet to more than 8,000 square feet. And that’s just the jewelry store, which offers a bridal registry, bridal gifts and groomsmen gifts, along with non-bridal merchandise.

“We are a full-service jewelry store, with 20 showcases that are strictly bridal,” says Anfesa, who employs six people full time and two part time. “But we also do watches and colored stones. We sell everything. Brides come largely from the Triangle area, but also from New York, and even California. Miss North Carolina just had her wedding reception here.

“We also do jewelry rental on high-end pieces for the bride,” she adds. “Not everyone can afford a $23,000 necklace, so we allow them to rent one for a day.”

The ballroom has done phenomenally well already, Anfesa says. “We’re pretty much booked for 2011, and even have reservations for 2012. It’s awesome.”

Moving ahead with such an expansion in a struggling economy was worrisome, Anfesa says. “But we’d already bought the land, so we decided to go forward and build. It’s working. The ballroom has been the icing on the cake. We just had the best Christmas since 2007.

Weddings account for about 85 percent of the ballroom’s business. Corporate events, for the Garner and Raleigh chambers of commerce, for example, also are hosted in the 7,500-square-foot space, as well as special events such as bar mitzvahs. Ornately styled with a magnificent iron staircase and appointed with beautiful crystal chandeliers, the ballroom can accommodate 400 people.

Anfesa’s owns and operates the jewelry store and ballroom, called the Grand Marquise Ballroom. It markets the state-of-the-art Alossi Renewal Spa as well, but rents out the 3,000-square-foot space. Brides and their attendants can have their hair done and enjoy manicures, facials, pedicures and massages – as many services or as few as they desire.

Full Package or A La Carte

Anfesa says about 20 percent of the brides she sees purchase the whole package, “but a lot of people come to us and already have an engagement ring.” The percentage of brides taking advantage of all the services is growing as bridesmaids become acquainted with the store, then themselves become brides.

“I’d like to have 100 percent, and it’s growing,” Anfesa says. “But I mostly want to sell jewelry; that’s my main passion.

“I loved the clothing industry; however, I realized that people might not spend $300 or $400 on a nice sweater, but would on nice jewelry. That’s how I got into jewelry, and in 1994 I did away with the clothing store.”

Retailing is in Anfesa’s blood. “My father owned four retail shoe stores and my mother worked for him; that’s how they met,” she says. “I have a junior business degree, but I always wanted to work.

“My daughter Meredith works with me full time. She’s our ballroom coordinator, but she also sells jewelry. She does it all.”

It’s most definitely a family trait.