When looking to generate interest in your latest line of jewelry try posting flyers in tattoo parlors, biker bars and motorcycle shops. That’s what Brad Lawrence, owner of Gold Casters Fine Jewelry, did to promote his new line of edgy jewelry from KING BABY. 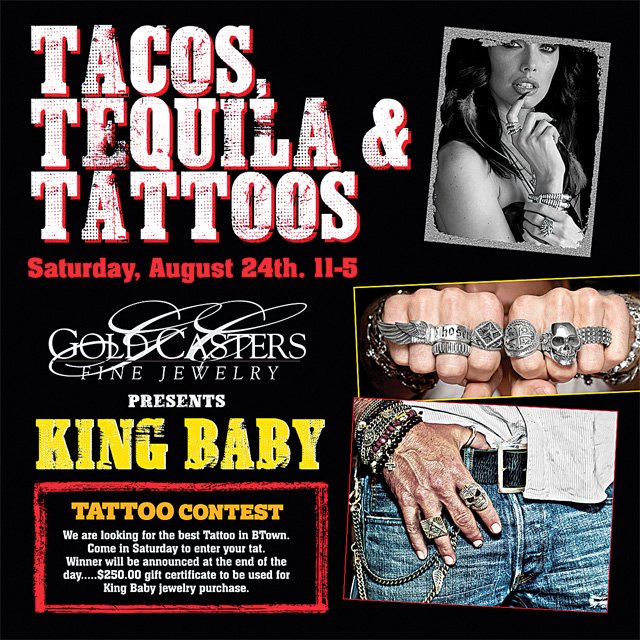 One of the store event graphics created by Porte Marketing Group.

For a fine to fashion jeweler, making a bold buy-in decision was topped by hosting an even bolder event to promote it. The Bloomington, IN-based retail jeweler hosted a “Tacos, Tequila & Tattoos” event in late August to create some buzz in his market over KING BABY. The event was a hit, and so was the decision to bring on KING BABY.

“It’s a unisex line, but most of the appeal is to men,” says Georgena Kincaid, president of Gold Casters Fine Jewelry. “There really are no great lines we’ve ran across that we liked as much as KING BABY. It is very edgy and we knew our customers would embrace the line. We are always looking for lines that are different. It is important for our customers to see jewelry at Gold Casters they won’t see in other jewelry stores.” 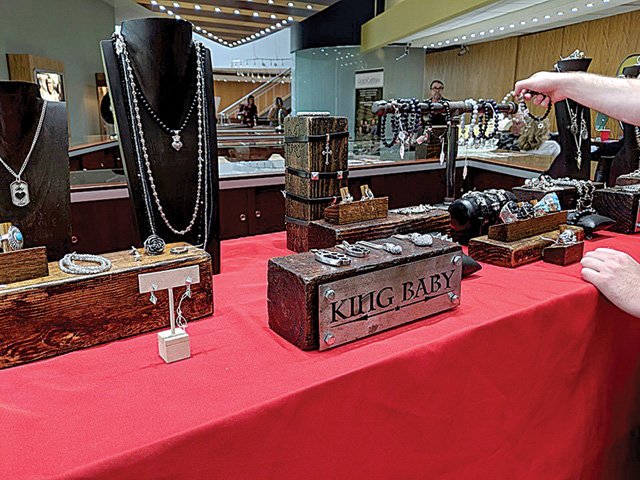 A display of KING BABY jewelry staged for the store event.

The event to promote KING BABY is something else the folks in Bloomington won’t see at other jewelry stores. Store owner Brad Lawrence is quick to admit that the August 24 “Tacos, Tequila & Tattoos” event was a greater “leap of faith” than the decision to buy into the line, but the response was “amazing.”

“It let our community know we are forward thinking and not a stuffy jewelry store,” says Brad.

Mission accomplished for Brad, who thought up the event idea. “Our owner, Brad, came up with the idea after viewing the line,” says Georgena. “He wanted to appeal to a different customer. He knew the event had to be fun and inviting. We see a big crossover in motorcycle riders and jewelry buyers. The line had an edge to it. He then thought about who would wear it and that’s when the idea was born. Brad loved the fact that you would never expect this from a jewelry store.” 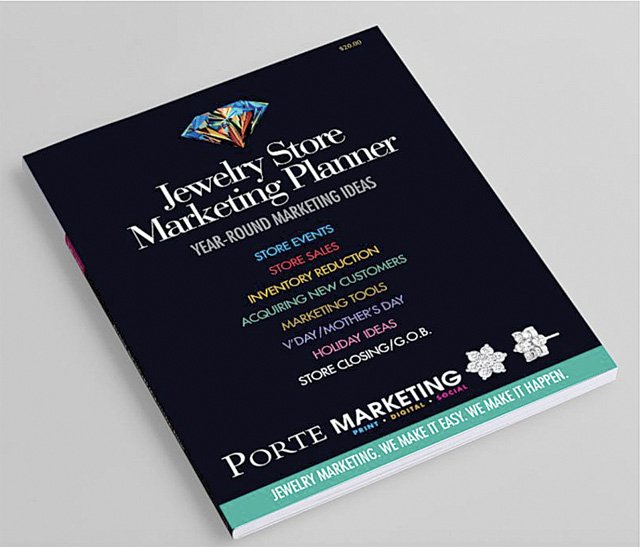 James Porte’s planning guide for store events.In the planning phases of the event, Brad and Georgena would leverage that “crossover” link between motorcycle riders and jewelry buyers. But, as both will attest, there really isn’t an “average spec” for this particular line of jewelry.

The very first sale of a KING BABY piece of jewelry was by an 80-year-old woman who purchased a heavy silver cross necklace for her grandson. Brad and Georgena saw the initial KING BABY sale as a good sign that the new line would have a broad appeal to a variety of customers with eclectic tastes.

To cast a wide net and better canvass their market, Brad and Georgena worked with James Porte, founder of Porte Marketing Group. Similar to creating a custom piece of jewelry for a client, Brad had a very specific vision that he conveyed to James in presenting the event concept to the Bloomington market, including a $250 prize to the event attendee with the best tattoo.

Brad and his staff were ready to start promoting the event. Posters measuring 36” x 36” were hung in the store. Flyers were distributed to local motorcycle shops, tattoo parlors and biker bars. Promotional images were posted on the store’s social media websites. Radio spots were aired in the week leading up to the event. Text reminder messages were sent to selected clients’ cell phones. And, sales associates made customer phone calls in the final days.

The concerted effort wasn’t just to promote the event and KING BABY jewelry. In order to pull off the event a good portion of attendees needed to have some ink on their skin. “We contacted 75 customers,” says Georgena. “And 52 people came to the event.” 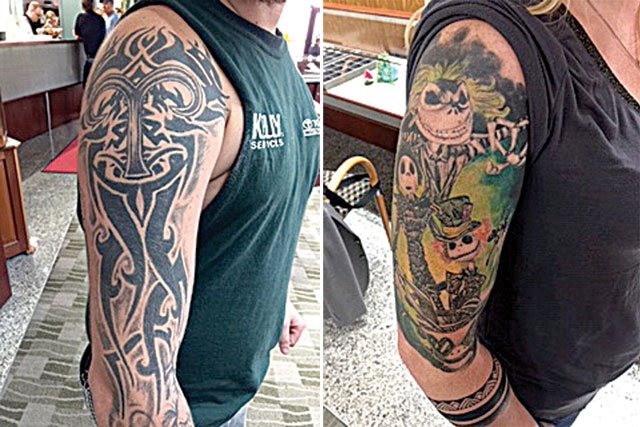 Samples of the inked customers that attended the event.

To handle the other two T’s of the event (tacos and tequila), Brad and Georgena hired a caterer to make tacos and serve margaritas. As guests of the events munched and mingled, sizing up the best tattoo in the room became the next task at hand. In general, most event attendees entering the tattoo contest had tattoos that were easily viewed.

“We did have some private viewings to see other tattoos,” says Brad. And, while event attendees were learning more about KING BABY jewelry, Brad and his staff learned something about tattoos, be it complex or a simple execution.

“Most every tattoo had a story,” says Brad. “One that really struck me was a young man that had the word FAITH on his inner arm. He explained he had lost everything at one time in his life including his faith. Thankfully he found his way back and decided to get FAITH tattooed on his arm so he could roll up his sleeve and see it. A reminder to keep his FAITH no matter what life throws at him. Many tattoos were memorials to lost loved ones. It was a day of stories. We learned so much.”

Brad’s team voted on the two winning tattoos, the online social media contest and the in-store event tattoo contest. After contacting the winners directly, Brad and his staff announced the winner with tattoo images on their social media websites. And, each winner received a $250 KING BABY gift certificate. 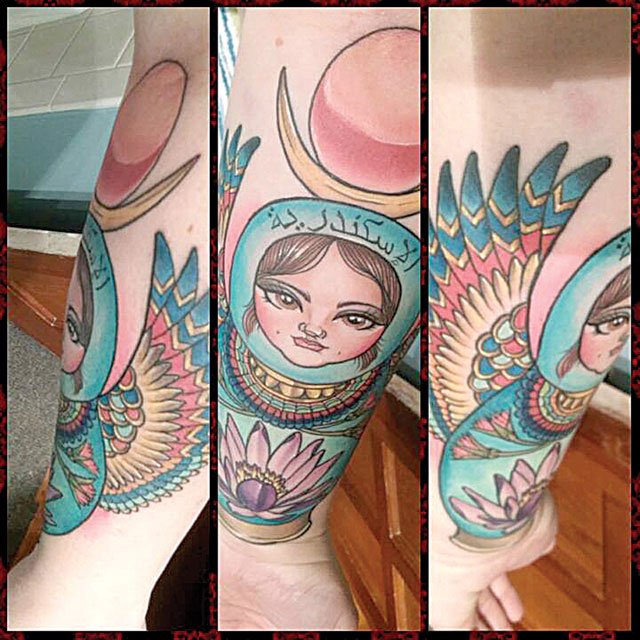 By all measures the event was a success. Sales goals were achieved for the event with bead bracelets selling out with male and female buyers. The event brought in existing customers while attracting new ones. KING BABY has a stronger top-of-mind awareness in Brad’s market. And, a valued vendor partner was witness to a creative and enthused retailer reaching out to their customer base.

But the true sign of a successful store event is the willingness to do it again. “We will definitely do another event like this for KING BABY jewelry,” says Georgena. “Brad has already come with a name for it. The next event is in the works and it’s going to be great.”