It’s not often a boy gets to learn jewelry repair and automotive care in the same garage, but Oz Hefner did. Growing up in Hickory, NC guaranteed him exposure to racing, but when the father of a good friend showed him automotive repair in the same garage where he taught Hefner how to size a ring, the high school boy was hooked. His love for cars and a desire to work with his hands came together in a life-changing way and, today, Hefner proudly operates Oz’s Jewelers, an almost 30 year old retail jewelry business. 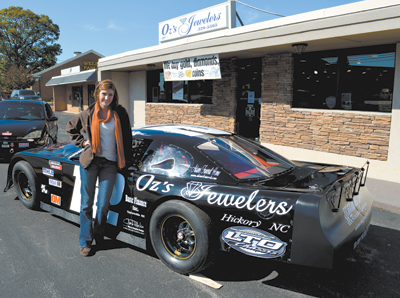 But it is his recent sponsorship of Annabeth Barnes, one of the nation’s youngest NASCAR drivers, that has brought him national recognition. Barnes’ drive to the top, with more than 17 racing championships (one more than her young age of 16) and her own reality TV show called “Born to Drive,” has put Oz’s Jewelers in the spotlight; a place where Oz Hefner doesn’t mind standing.

“My love for racing started when we built our first car, a ’73 Vega,” recalls Hefner. “It took 2 years to build and it wasn’t too long after that I started racing on my own. I won my first race in a rear engine dragster and from that point on I either made it the finals or won a race each year. I’ve run at a national level for several years and finished in the Top 10 nationally. I’ve also been nominated as the Car Craft Driver of the Year. It is just something I love.”

In 1983 Hefner opened his own business in his home. He used his spare bedrooms for jewelry repair until his first child was born and he was forced to find a new location for the business. Starting small, Hefner had three cases of jewelry and refused to go in debt for anything. He gained customers by word of mouth and within a couple of years was forced to move to a larger location. But it wasn’t until 1987 that Hefner decided to jump into jewelry retail whole heartedly. It would be the first time he’d ever put a sign out.

“I worked 9 a.m. to 6 p.m. every night and would go home and spend time with my young daughter, Somer, and my wife, Brenda. When they went to bed around 9 p.m. I’d go back to the shop and do trade work until one in the morning so I could pay for my inventory. It wasn’t easy, but that’s how I built my business.”

With his own racing passion bubbling at the surface, Hefner watched with great interest as a young North Carolina girl, Annabeth Barnes, started catching national attention for her natural talent and fierce competitive spirit. Hefner had always expressed interest in sponsoring a driver and the fact she was a young girl having to fight her way through a male-dominated sport appealed to the dad in Hefner. 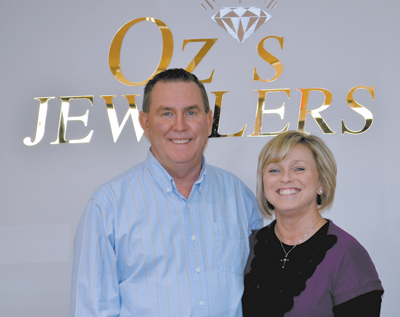 “I’d mentioned to my wife that Annabeth would be someone Oz’s Jewelers could sponsor because we have a daughter,” recalls Hefner. “We understand how hard they have to fight to get the same treatment in a sport run by men. Right about the same time my mother-in-law asked if we wanted to sponsor her (Barnes) without knowing we were already discussing it.”

After discussions with Barnes’ parents, Oz’s Jewelers sponsored Annabeth Barnes in her 2011 stock car season. For Annabeth it was a monumental milestone.

“Oz was my first big sponsor,” Annabeth comments. “I tell him all the time that we could not have raced last year without him. When we needed him, he was there. We had a great year, but the last few races were tough because we were filming at the same time and he always encouraged us and gave us what we needed to continue racing.”

Hefner and his “pit crew” were proud to come alongside Annabeth and help foster such a promising racing career, and it has been a great opportunity to promote their new line called Steal Her Heart. Hefner created a signature heart pendant for the new line that he gave to Annabeth on the first episode of her reality TV show. Steal Her Heart also incorporates a bridal line with varying price points making it extremely appealing during the 2011 holiday season. As a sponsor, the logo is also printed on the side of Annabeth’s car.

“We really received so much more publicity than we expected when GAC (Great American Country Network) filmed four episodes of Born to Drive starring Annabeth,” states Hefner. “We were fortunate to be a part of the first episode as her sponsor and we hope next year will produce a full season of the show.”

Oz’s Jewelers and Annabeth Barnes have bright futures ahead of them. With high school almost behind her, she has her sights set on becoming a NASCAR driver and, ultimately, the first female to win the Daytona 500. But she’s also looking to earn her nursing degree for “future use.”

Oz’s Jewelers is looking forward to focusing on its new bridal line, delivering complete customization to their customers. Having already offered custom fashion designs, Steal Her Heart will surely expand and showcase Hefner’s craftsmanship and skill.

And, Oz’s Jewelers will forever be a part of one girl’s dream that leads down the road to Daytona. Best of luck Annabeth!

Be sure to check out Hefner’s website at www.stealherheart.com for more information on Hefner’s new line. You can also visit www.ozsjewelers.com.

Annabeth Barnes started racing go-karts at the ripe old age of 7, following in the footsteps of her father and her older sister. In her short career she is the proud owner of more than 17 championships, an actor in the movie Racing Dreams, the focus of a GAC reality TV show and a list of accomplishments a mile long. Be sure to check her website at www.annabethbarnes.com.