Sales and support staff in jewelry stores across the country routinely go through training basics from product knowledge refreshers to reviewing take-in procedures at the repair counter. Amber Gustafson, owner of Amber’s Designs Fine Jewelry, decided to add a new chapter to her staff’s training curriculum by offering a gun safety course to each staff member working at her Katy, TX-based jewelry store. 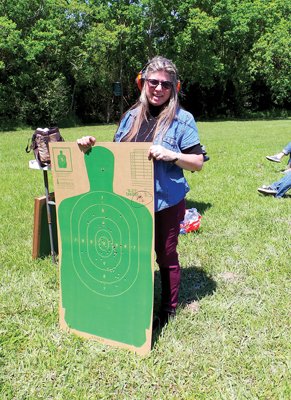 Like most Americans, Amber is concerned about gun-related crimes, especially those committed against jewelry stores. But Amber’s decision to offer her 15 staff members to voluntarily take a gun safety course was mostly a reaction to changes in The Lone Star State’s License to Carry law that went into effect on January 1 this year. On June 13, 2015, the Texas Legislature’s bill allowing its citizens to carry handguns openly was signed into law, and took effect at the start of 2016.

“Katy, Texas is about 30 miles east of Houston,” says Amber. “In our small Texas town of 20,000 a lot of people here are gun proponents. Whether it’s someone lawfully possessing a gun, open or concealed, or when some bad guy commits a crime in our store, I want my staff to feel at ease around guns and know what to do in the event of an emergency.”

Amber is very candid when sharing information about having guns in her store. “Always had them, always will,” says Amber. “America is the only country in the world where the individual can arm themselves to protect themselves.”

Like many retail jewelers dealing in high-value products, she can’t ignore the possibility of one day confronting an armed robber in her store.

“Our goal [with the gun safety course] is not to confront or chase bad guys – that’s for the police,” says Amber. “Our first policy is always to listen and comply, and do whatever is asked of us during the commission of a crime, gun related or not. But as everyone knows, an intense situation can quickly turn for the worse in a matter of seconds.”

The good news for Amber and other retail jewelry store owners across the country is crimes committed against U.S. jewelry firms dropped from 1,381 in 2014 to 1,117 in 2015, a decrease of 14.7 percent, according to the Jeweler’s Security Alliance’s (JSA) 2015 Annual Crime Report (these are only crimes reported to the JSA).

Added good news came with the report’s finding that total dollar losses from crimes committed against U.S. jewelry firms dropped from $77.8 million in 2014 to $69.3 million in 2015, a decrease of 10.9 percent. This may be welcome news, but the decreases in crimes and dollar losses don’t help Amber and other Texas-based jewelers. 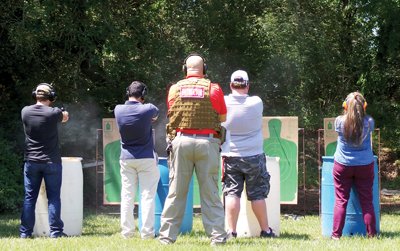 According to findings in the same JSA report from last year, Texas is number-two of the top-four states with the most active robberies committed against U.S. jewelry firms. (California is number one, followed by Texas, then Florida and New York.)

As if Amber’s worries weren’t large enough, the target on her back gets bigger with her store located inside a bank building. Both a blessing and a curse, Amber and her staff benefit from routine perimeter checks by the bank’s security staff and the occasional drive by from local police.

She can’t, however, overlook the distinct possibility of how prime a target two high-value businesses in a single location present to the average bad guy and the potential safety risks to Amber, her staff and the customers. And, it’s difficult to ignore the level of concern security is for those that work in the gem and jewelry industry.

“Many companies have pulled their reps from going on the road,” says Amber. “Those that still travel to stores with product are at constant risk, prepared for the real possibility of being robbed at gun point. I know several sales reps that have been robbed not just once but several times, the same goes for retailers. Security is a constant concern for pretty much everyone that works in this industry.” 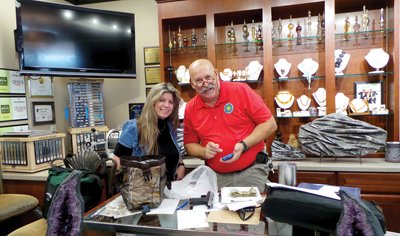 At a gala charity event earlier this year Amber shared her security and safety concerns with a man seated at her table. A former Los Angeles S.W.A.T. team officer now living in the Houston area, the gentleman explained that he worked for Cane Security Outfitters that offered private citizens and business owner’s gun safety courses. Amber asked the gentleman a number of questions that night and in subsequent phone calls to determine if such a course would be a good idea for her employees.

On April 23, Amber held her first gun safety class at her store as part of a team-building exercise. Some staff members already own guns or have taken gun safety courses, but Amber wanted to present this information to staff members and their spouses. The cost for each person to take the course was about $175.

The in-store portion of the course included a discussion on gun safety basics, from identifying a safety switch and how to engage and disengage it to situations that would justify using a handgun. The practical portion of the course included firing weapons at a gun range. Like any team building exercise, Amber took pictures to preserve the historic moment: her store’s first gun safety course. And, she posted the images on the store’s Facebook page.

“I was very hesitant to share any information about the staff taking these classes, be it store signage or even Facebook postings,” says Amber. “I wasn’t sure if we would lose or gain customers. We found that customers appreciated the effort and there was no negative impact on sales, in fact, customers now know this is one of the safest jewelry stores in the area to shop.” 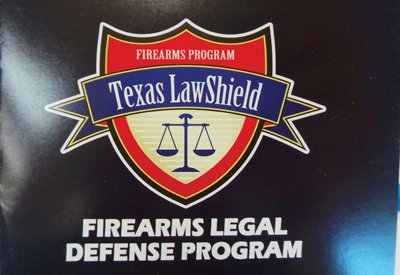 Of the store’s 2,100 Facebook fan base, the gun safety class photo album reached 153, was shared by three people and received 15 comments, almost all of them positive or very supportive of Amber’s decision to offer gun safety courses. One customer posted: “Way to go! My money spent with your store was well received!!! I will continue to support you!”

Amber will continue to offer gun safety courses to her staff as part of her approach to team building. More importantly, gun safety, and knowing how and when to use a firearm, is permanently part of Amber’s safety and security procedures. Staff members and customers agree with the decision, making her store a safe, secure place to buy fine jewelry.