Jeweler puts it ‘all out there,’ takes risks when talking jewelry to his market

When a “major player” competitor moved to town, Jason Druxman and his business partners knew they had to up their game in reaching out to their Appleton, Wisconsin customer base. Acting on the advice of trusted retail advisers, Jason became the face and voice of Avenue Jewelers in 2003 to take on the new jeweler in town.

“Fifteen years ago, when the decision was made for me to be the spokesperson for Avenue Jewelers, I wasn’t even the owner of the store,” says Jason. “I was 35 then and it was decided I could best connect with Boomers and the younger bridal market. Back then and today, I approach each marketing and promotional message the same way, I put myself all out there and am willing to take some risks – and some hits.”

For Jason that means using a variety of approaches (humorous and conversational) over a number of mediums (radio, print, TV, video and social media) to make memorable impressions with customers in his Midwestern college-town market. Putting yourself in the spotlight using a lot of humor to get attention takes courage, what Jason considers his leading qualities for the spokesman job. 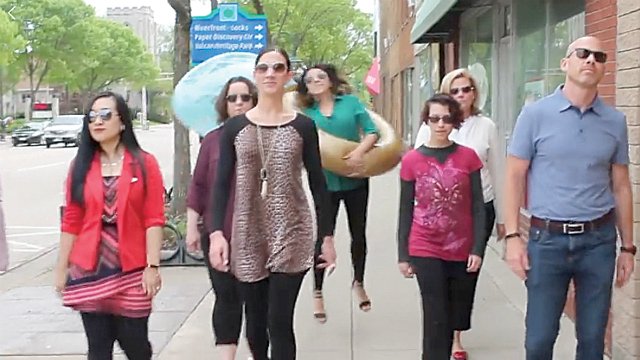 Jason Druxman and his staff produced a Back Street Boys parody video to promote the store’s Big Bling event.

Whether it’s a promotional parody video of a Back Street Boys’ major hit, donning hilarious holiday costumes in the weeks leading up to Christmas, or posing for a local magazine’s summer swimsuit issue, Jason has received a lot of praise and attention for his many marketing efforts. But he has also had to face some sniping criticism (especially in the age of social media) for, as he likes to say often, “putting it all out there.”

“People can be brutal in their reviews and postings,” saysJason. “But even when your message isn’t well received by some, a majority of others get it and that video, radio commercial, TV spot or social media posting of me singing gets them talking about me and the store.”

Taking chances by being “a little out there” is part of what it takes to reach a younger audience. Gaining the confidence and cleverness to do it, however, took some time – about five years. Jason’s first spokesman steps started with radio and print. Then the TV commercials started. 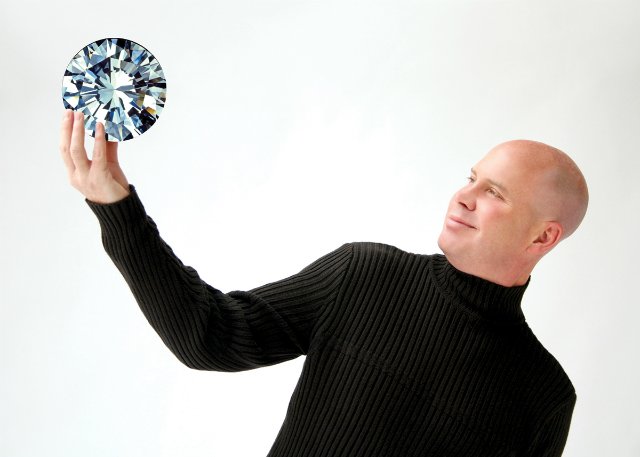 As Jason was working diligently to master these mediums, he also developed various ways of branding himself, which was done with a large dose of humor and cheekiness. In 2005, as part of a major website redesign, Jason and each of his staff took on humorous job titles. As the store’s diamond buyer, Jason’s working title became “The Diamond Stud.” Jason does have an official title, but “The Diamond Stud” is the moniker used “when it makes sense,” says Jason.

This branding effort took a comical seasonal approach for Jason when he decided to wear Christmas-themed costumes from Black Friday until Christmas Eve. No matter the costume, be it a Christmas tree, an elf or even the Grinch, Jason wore it most working days during the five-week holiday crunch time. He even shoveled snow wearing the costumes, which continues to come up in conversations to this day. 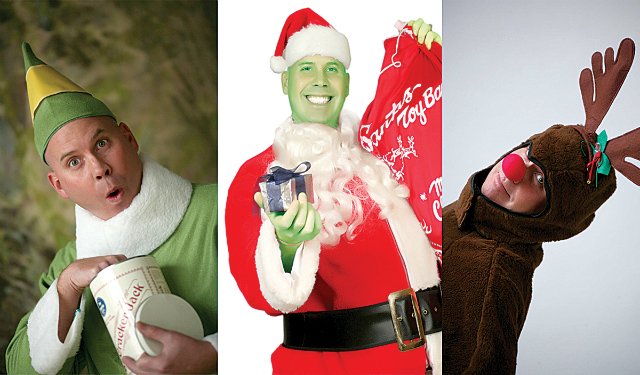 Friends with a local professional photographer, Jason did numerous studio stills of him wearing the Christmas costumes and even made a few hundred “trading cards” each holiday season. “To this day, pictures of me wearing those Christmas costumes are still on the refrigerator doors of many Appleton family homes,” says Jason. “The kids I handed them out to are now adults, and remind me of the time when I gave them the trading cards. Guess where they’ll most likely buy their jewelry?”

The Christmas costume trading cards gave way to team-based promotional efforts during the holiday season, starting with Bad Santa promotions. Two years ago, the staff also had seasonal fun wearing ugly Christmas sweaters. It was one of many signs that Jason had clearly established himself as the voice and face of Avenue Jewelers, and he had become comfortable sharing the warm glow of the spotlight with his staff. 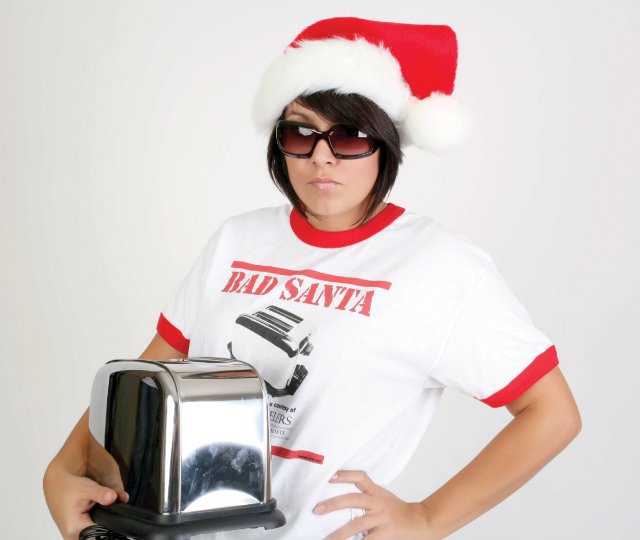 Avenue Jewelers’ staff got in on the holiday season fun with ‘Bad Santa’ t-shirts.The move to reinforce the expertise and personalities of each staff member came at a time when Jason pared down his advertising budget to three mediums – radio (50 percent), TV (25 percent) and social media (25 percent). Jason is represented across all three with an emphasis on radio and TV, but his staff plays starring roles in a number of Facebook postings, leading with a variety of “Tips, Tricks, Hacks” videos along with the usual humor and spontaneity for which Jason and his staff are known in Appleton.

“Self-deprecating humor is fun,” says Jason. “Poking fun at yourself and being super silly is part of what our videos are all about. The great thing is, what you see in the staff videos, is pretty much what they are in person. Customers get to know them [staff] partly based on the videos and it’s part of the relationship they have with the staff in a store where jewelry buying is relaxing and fun.”

Video views on Facebook tell a lot of this success story, where hundreds, even thousands of unique views and countless shares indicate Jason and his staff are doing Facebook right. But turning his customers into brand ambassadors has been one of Jason’s biggest successes across several mediums starting with a photo booth in the store’s showroom.

With a traditional photo booth turned digital, Jason and his creative team have captured hundreds of “I do” moments. Over time, placards and T-shirts with humorous engagement phrases were added. Jason spares no expense with the T-shirts, with more costly super-soft, quality cotton shirts with a number of slogan, design and color options.

“People have worn out their T-shirts and have asked for replacements,” says Jason. “Of course it’s free.”

Ring Cam videos have taken customer roles in videos to another level, with the actual footage of the proposal moment captured on video. The store’s website, Facebook page and YouTube channel are crowded with such videos. 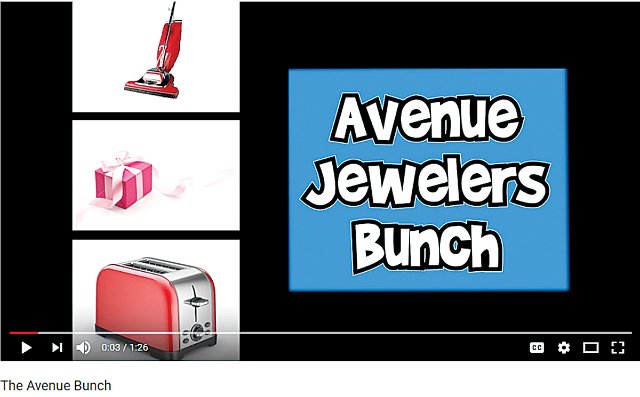 Jason’s videos have reached such a level of popularity that some customers have asked to play a role in them. One female customer made such a request of Jason. At the time of the woman’s request, Jason didn’t have a female role for this customer, but did for her husband. He ended up playing the main role of the “Avenue Bunch” Valentine’s Day video. Produced last year, the “Brady Bunch” theme video has received more than 4,500 unique views on Facebook and that number continues to grow. 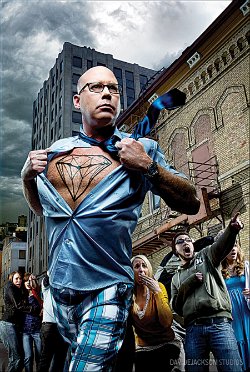 Jason Druxman poses for a local magazine. Courtesy of Fox Cities Magazine and David E. Jackson Studios.Customers’ willingness, excitement and energy are a testimonial in itself. But Jason and his staff have tapped into an enviable level of customer relationships and satisfaction to achieve a perfect Google 5-star score with nearly 650 posted reviews.

Jason enjoys the challenges of being his store’s spokesman, and isn’t fond of talking about what makes him the best person for that role. But he also knows without his committed, willing and loyal staff, there’s no possible way he would have the temerity and the confidence to take risks in his marketing and promotional messages, especially with so much invested in social media.

“Without my staff I couldn’t do it,” says Jason. “For the most part what we do works and makes an impact. Still, putting yourself out there, the risks and taking the shots couldn’t happen without them.”