“From almost as soon as I could walk, I greeted customers at the front door of our store. As I grew, I vacuumed and dusted, ran the hand-stamp Pitney Bowes machine, helped make home deliveries.” For Frank Jolly Ragsdale of Jolly’s Jewelers (Jollys.com) in , it’s all in the family. Founded in 1881, the family store spans four generations. The spacious building at the current location, a beautiful new open air pedestrian mall, boasts gleaming rich original mahogany cases dating back 100 years. Reflecting the cross-currents of the capital’s history over the past century and a half, Jolly’s story is the story of the city. 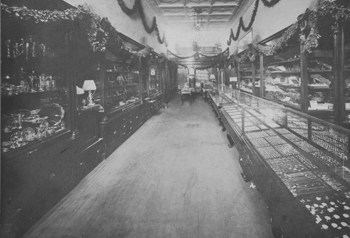 Mr. Ragsdale readily spins a yarn, weaving a web of colorful anecdotes across the time span, “My great grandfather, Benjamin Rush Jolly, founded Jolly’s in downtown in 1881.” An inventor and erstwhile grocer, he moved into the jewelry trade.

“His father Nathaniel Jolly was a wheelwright, skilled in forging metals, before the Civil War. During Reconstruction, a new Metropolitan Hall complex was built to rekindle pride in the capital, including a city market, jail, fire department and theater. Nathaniel Jolly was one of the three major contractors on the 1866 theater project.

“In 1888, Jolly’s moved several blocks to , taking over a store from cabinetmaker brothers Charles and William Thompson. Their father, William Thompson, was a prominent cabinetmaker. After the fire that destroyed the Capital building in 1835, he had refurnished the NC State House and Senate Chambers, building all the chairs, tables and the speaker podium.

“My great grandfather Benjamin Rush Jolly married Susan Carolyn Overby. Her father, J.J. Overby, was a Raleigh City Commissioner. As the Civil War ended, Overby was party to the final surrender to in . Skillful negotiations spared the capital from ’s wrath, being burnt, a fate of many other southern cities. 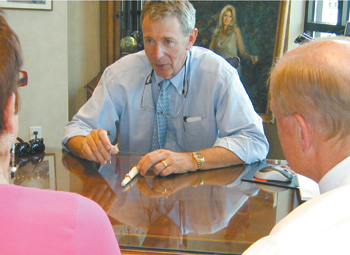 “From 1888 to 1974, Jolly’s in downtown was an elegant store in ‘the carriage trade,’ so-called for the stylish carriages of clients who frequented the store. Now they drive BMWs,” recounts Mr. Ragsdale, a twinkle in his eye.

“In 1909, Benjamin Rush Jolly and his son, Frank Moseley Jolly, my grandfather, founded the NC Optometric Society. At the time, jewelers were also optometrists, fabricating frames and fitting them to lenses. The Jollys along with other area businessmen advocated that optometry should be a separate profession with its own standards.  Frank Moseley Jolly became a Doctor of Optometry as well as running the family business.

“Disaster struck in 1919, revealing the fragility of life. At the close of World War I, Dr. Frank Moseley Jolly, age 39, caught the influenza that swept the world and died within two days. He left behind his widow, Janie Robbins Jolly, and four children including my mother Susan. My grandmother took over the store. Educated, a school teacher, she was one of the toughest, hardest women, but always a lady. An iron-fisted female, she always told the truth, never exaggerated. With a keen sense of business, she knew how to treat people.

“October 1929. The stock market collapsed. In 1930-31, many banks were failing. Jolly’s heard one of their banks, which held a note for some seasonal debt, was about to collapse. In those days, if the bank failed, any money on deposit was lost, but any obligations to the bank were still due and had to be paid. My mother and grandmother went to the bank and tried to pay off the note but the bankers refused – the standing policy. The two women, facing off against a team of men, thinking quickly, went to Mr. R.P. Holding, Sr. the president and founder of First Citizens Bank and were able to pay off the note and transfer the remaining cash to First Citizens. The next day, the original bank failed. Jolly’s still to this day partners with First Citizens Bank, a major institution.”

Mr. Ragsdale recalls: “I was thrust into the business at age 19 because of an immediate family need. At age 21, I received my Graduate Gemologist and Certified Gemologist degrees. Becoming President in 1978, I took over the store and ran it along side my mother until her death in 1992.”

What does the future hold? “We’ve always specialized in diamonds and bridal. No one 130 years ago could imagine the current climate, with the commoditization of diamonds, competition from world imports and the internet. Bridal, beads and buying gold are currently keeping most businesses open. We now also feature designer Collections, including Mia Katrin for Jewel Couture. The Raleigh-Durham-Chapel Hill area has had a relative advantage because of the proximity of the state government, major research institutions and universities.” 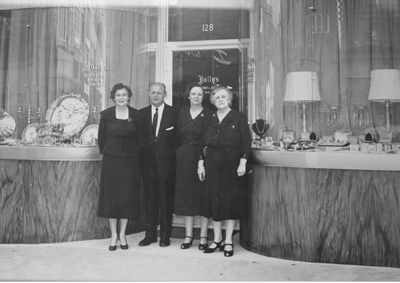 Jolly’s family tradition continues strong. Mr. Ragsdale’s son has just graduated from NC State with degrees in Business Administration and Accounting and his daughter is a rising senior at UNC Chapel Hill.  With its time-tested tradition of business and family values – integrity, adaptability and strength – all possibilities are open. The future is bright.