What began as a fun elective in high school has become the career of a lifetime for Jon Miller, owner of Jon’s Fine Jewelry in Cocoa Village, Florida. The 30 year jewelry veteran has created a retail store that’s woven itself into the very fabric of the community, and he couldn’t be happier. Jon gladly recounts stories of finding the perfect stone or working for days on a custom design, but the modest retailer doesn’t promote the tremendous amount of philanthropy in which his store participates every year. The man with the large heart can’t refuse his neighbors in need. 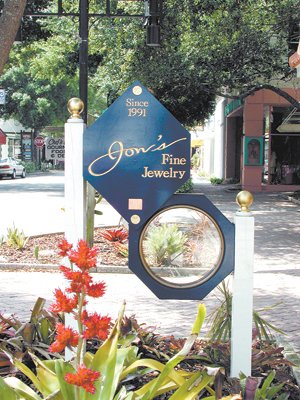 Jon Miller loved building models as a child. He loved working with his hands, and he had a meticulous eye when it came to detail. But it wasn’t until he took a silversmithing class in high school that he entertained the idea of making jewelry. When his piece garnered praise from his instructor, Jon warmed up to the idea.

After graduating from Bowman Jewelry Technical School in 1979, Jon took his first bench job at T.A. Anderson Goldsmith in Cocoa Village. Under the tutelage of the owner, Jon mastered wax carving and soon was allowed to create his own designs.

In 1991 Jon bought the store and changed the name to Jon’s Fine Jewelry. He maintained the original location in historic Cocoa Village and slipped naturally into the role of owner. He focused more on custom work and recalls with joy creating pieces that made his customers happy.

“As much as I love custom work, I love my customers even more,” states Jon. “Our 22 years in business is proof that we enjoy our customers. Maybe that’s why we’re known as ‘the family jeweler’ in town.”

Today Jon utilizes the CAD system to reach a final version of a custom piece. Working designs out through the computer allows his customers to sit in on the design process from the beginning. He enjoys discussing the various adjustments along the way until a final design is reached.

“Every time I create a custom piece I start by doing my research on the web,” explains Jon. “Then I study the images and information I’ve found until I sit down and can draw the main element of the piece. Sometimes it only takes one attempt at the sketch to get it right, but other times it may take several attempts over a few days until I’m satisfied with the rendering. I will even think about it at night as I try to sleep.”

Jon considers more than just the object of the design. He’s quick to point out that some of the most important elements in creating a custom piece are the descriptions the customer provides as well as their personality. Without those two factors it’s difficult to get it right.

With all the custom work going on in his store he rarely finds time to volunteer. He doesn’t, however, let that stop him from giving back to Cocoa Village.

“I feel strongly that we all need to give something back to our local communities, so I make donations to as many local charities as I can,” states Jon. “I believe local charities are often overlooked, especially when we have large-scale disasters.”

As often as once per day local philanthropic organizers will walk through the door of Jon’s Fine Jewelry requesting some kind of assistance, and no one walks away empty handed. Nonprofits like Habitat for Humanity or Meals on Wheels, Paws for Patriots and the Central Brevard Humane Society, are just a few to which Jon and his staff donate.

But perhaps one of his most well-known charity programs is called Time for Charities. Every time a customer comes in for a battery replacement the store gives the customer the option of paying for replacement or putting the money toward the store’s charity of the month.

“As a member of the Independent Jewelers Organization, I attend their Team Clinics when I’m at a show, and I got the idea for the watch battery give away from someone in that clinic,” recalls Jon.

Jon himself is also an active Rotary member with a desire to give back to a community where he says it’s “a great place to have a business.”

No matter what they’re doing, Jon and his staff remain focused on the people as much as the product. Whether it’s buying stones in Antwerp, remodeling their store or donating to charity, at Jon’s Fine Jewelry it’s all about the people.