Robert Smith is a persistent man. He isn’t easily deterred and he insists on doing things the right way, which usually takes a little time. Two years ago his persistence paid off when he introduced his patented interchangeable jewelry line called Kameleon. A “never before heard of” product, Kameleon jewelry allows owners to change center stones in a variety of jewelry settings as often as they change their moods.

Two years after his line debuted, Robert Smith has more than 650 stores selling his products. Did he have any idea it would be this popular? Probably not, but he’s enjoying the unexpected. 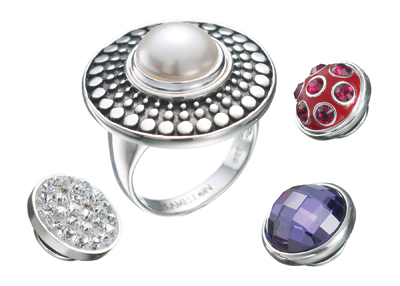 “We believe everyone shares a basic drive to express themselves and we knew adaptability was a key ingredient to making that happen,” recalls Allison Smith, wife of Robert. “We didn’t know just how popular this product would be.”

It all started four years ago when Robert Smith became inspired to create an interchangeable jewelry line. His Canadian silver wholesale business had done well, but it wasn’t until Robert had repeated requests to change a center stone on a popular ring that he realized the need for versatility within the jewelry market. Why couldn’t jewelry change its look?

With a concrete idea in his head, Robert teamed up with his father to translate his idea into a computer drawing. His next step, finding a suitable manufacturer, took time and effort but the real work was yet to start.

With a manufacturer on board, time, money, patience and persistence were needed to sustain his idea during the development stage. Many prototypes were sent to Robert, only to be refined and sent back with instructions for adjustments. It was a lengthy process that many people wouldn’t have the stamina to complete.

The prototype process included creating new silver jewelry casting techniques along with the invention of a special rubber seal technology. Because the mechanics of this jewelry were completely new, Robert felt extensive testing needed to be done to ensure the longevity of each piece. With a custom-built machine designed to do nothing but test the Kameleon’s special rubber seal, the seals proved to be durable even after 7000 cycles of being popped in and out.

“If it wasn’t perfect, Robert wouldn’t accept it,’ explains Allison. “We had prototypes all over our home and the testing machines ran all night long.”

In early 2007 Kameleon Jewelry was introduced to the fashion market at the AmericasMart show in Atlanta, Georgia. Robert left with more than 70 orders in hand and shipped his first retail orders in April of that same year.

Since that recent launch Kameleon Jewelry has expanded its offerings. The collection has over 60 base jewelry designs including rings, earrings, pendants, bracelets, necklaces and pins. All of the designs accept the small interchangeable inserts called JewelPops. These jeweled inserts can be easily popped in and out of each piece of Kameleon Jewelry by applying a small amount of pressure to the back while inserted into a base piece. A reassuring ‘pop’ or click will be audible, indicating the JewelPop is in position and secure. No special tools are needed.

The Kameleon Collection designs are all sterling silver and, currently, there are more than 250 JewelPop designs set in semi-precious stones, Swarovski Crystal, synthetic opals or sparkling cubic zirconia. At each major show Kameleon releases another 20-30 new designs. 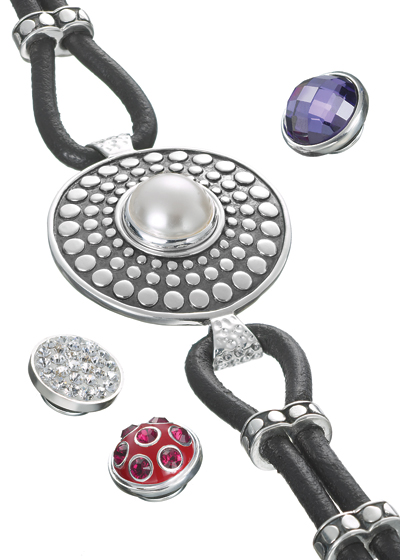 “Every JewelPop, every piece of Kameleon jewelry out there is a small part of me,” states Robert, “and because of that I feel I want to make it as perfect as possible.”

Kameleon Jewelry base pieces start at $18 up to $199. JewelPops start at $20 up to $39. Retailers can purchase a pre-pack collection that includes a variety of the proven best sellers.

Already looking to the future, the Kameleon team has just introduced sunglasses to the collection and is in the planning phases for belts, leather cuffs and a jean button, all of which house any JewelPops piece.

“It’s hard to describe the entire journey from concept to actual product,” Robert says. “Kameleon began as an idea and came to life through years of persistence and belief in success. Anyone considering starting a business or creating a new product should try to plan as far in advance as possible, and don’t forget to be ready for anything.”

Robert and Allison Smith are both from Canada and live in Dartmouth, Nova Scotia with their two boys Kenzie and Hunter. Check out the Kameleon website at www.kameleonjewelry.com or call 866-431-4484 for a catalog.