When a group of nuns met with Mr. and Mrs. LaBiche in the early 1940s to tell them their sixth grade son just wasn’t cut out for school, the sweet couple took it in stride and guided their son toward finding a job. The young boy took several jobs before landing his first jewelry repair position at age 16, and the nuns couldn’t have predicted the long-term success the boy with a sixth grade education would experience.

Maurice Jerome LaBiche cut his teeth as a jeweler’s apprentice by learning the craft from not one, but 18 different jewelers in a trade shop in New Orleans. Specializing in specific elements of repair meant each jeweler taught the young boy their specialty. A wealth of knowledge and experience was bequeathed to the New Orleans native. He soaked it up until he was called to serve in the Navy during the Korean War in 1951. Once he completed his service he landed in Meridian, Mississippi working as a wholesale jewelry repair man.

By this time LaBiche was a well-trained jeweler whose customer base grew by word of mouth. His reputation to be able to repair anything had spread as far as Columbus. His success required the help of his wife, Teresa Bailey LaBiche, to help with bookkeeping, appraisals, pearl re-stringing and just about everything else. Together they raised five children and sustained a successful, reputable jewelry retail business until his death in 2007.

Steven LaBiche, the fourth of five children, jumped behind the bench after high school graduation. Describing the start of his now 35 year jewelry career as the result of career confusion rather than jewelry passion; Steven is proud to carry on his father’s rich tradition of exceptional product quality, intricate repair capabilities and a love for all things mechanical.

“I’m very mechanically inclined and enjoy understanding how to put something back together,” he explains. “My dad taught me that in order to fix something you first had to understand how it was put together, and I use that every day.”

With repair being a mainstay of LaBiche Jewelers, Steven still relies on the skills and nuances his father taught him. Whether it’s a family heirloom piece that needs repair or an existing piece that needs to be transformed; he is thrilled to give an old piece new life.

Also, like his dad, Steven works alongside his wife, Tricia. Once a nurse by profession, she, like Steven, shares a love for fixing things, just not jewelry. Instead Tricia enjoys solving customers’ problems and working through the details of their needs. Being helpful is just what a nurse turned retail jewelry partner does.

“When Steven bought the store from his mother in 2008, it couldn’t have been a worse economic time,” Tricia explains. “That’s when I started working at the store and it didn’t take long before I was excited to be learning new things about the products and the industry.”

Both are members of the Mississippi Jewelers Association and Steven’s mother, Teresa, was awarded a life-time membership to the organization. 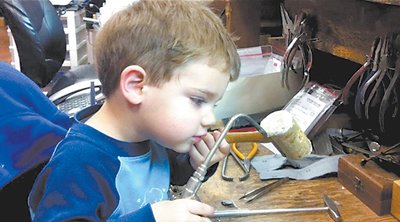 Making a concerted effort to boost marketing, improve product quality and continue in the repair business have culminated in big success for Steven and Tricia. But it is with a nod to Maurice that the couple has left the signature New Orleans-style working fountain in the middle of the store, as well as the beautifully painted wall mural of Pirate’s Alley that Maurice asked his daughter to paint many years ago.

“I remember when my father put that fountain in the middle of the store and I kept telling him he was taking up valuable display space, but he didn’t listen to me. Now it’s grown on me and if we move to a larger location we hope to take the fountain with us.”

At the end of the day, LaBiche Jewelers does what independent jewelers do best – offer exceptional quality and customer service with a down-home, family feel.