Ashley Green holds her family’s history dear – and so she’s honored to be in charge of celebrating Green’s Jewelers 100th anniversary. The Roxboro, N.C., jeweler did it in style Oct. 17, with city and county dignitaries tipping their hats along with family members, employees and appreciative customers who dropped in at Green’s to honor the family business.

“It was a great success, a lot of fun,” says Ashley, adding: “If it weren’t for the people of Roxboro and Person County, we would not be in business. I wish I could take all of the credit, but I can’t!”

Ashley’s grandfather’s great-uncle, James Willis Green, founded Green’s in 1890 in Rutherfordton, an hour east of Asheville. Known as Willis, he started the business as a small shop repairing watches, clocks and tin coffeepots. “We are so fortunate to have this family history,” Ashley says. 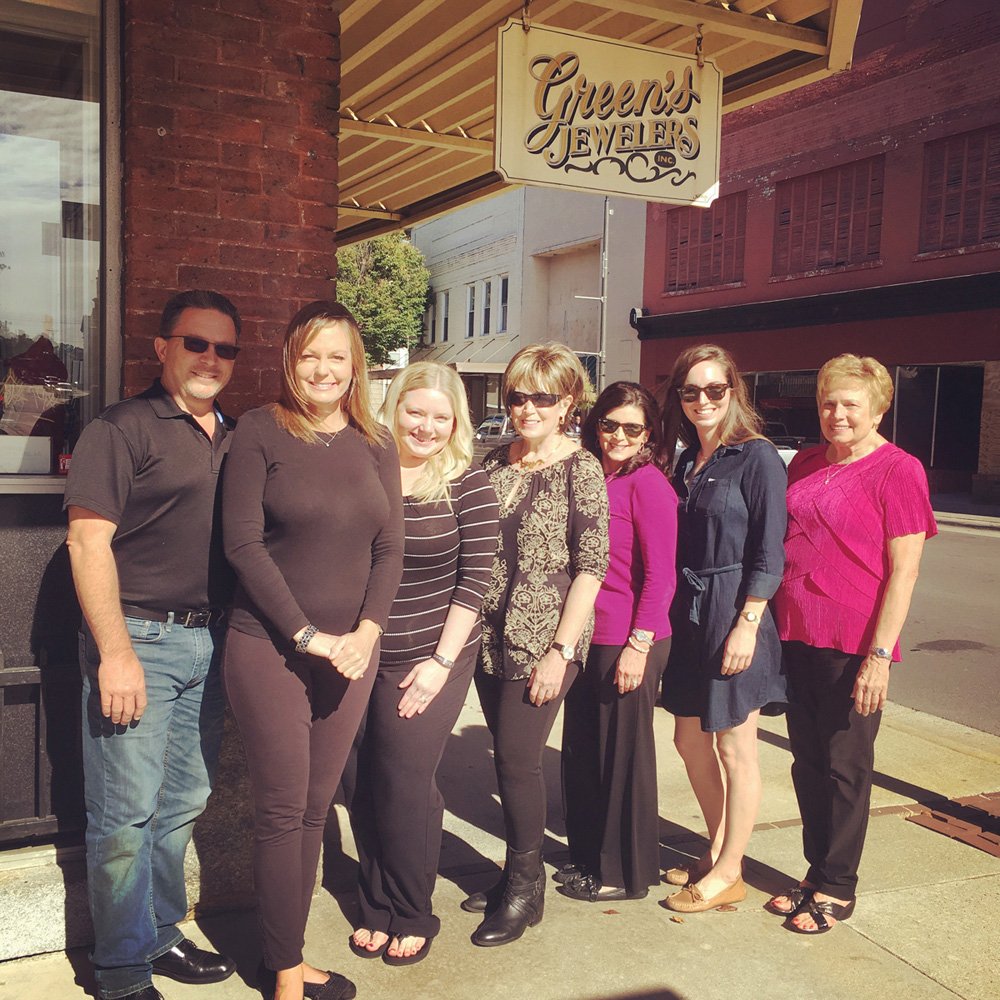 In 1918, Willis decided to move his family to Roxboro in the north-central part of the state. “He was looking for a better economic property for his wife and children,” Ashley says. “He and one son, Augustus, who went by Gus, restarted Green’s in Roxboro and called it Green’s Watch Shop. In the 1930s, my grandfather, J.W. Green, moved to Roxboro with his wife after graduating from the University of South Carolina with a degree in mechanical engineering. My grandfather loved to tinker, and that’s why his Uncle Gus asked him to work in the business. My grandfather would work in a textile mill in Roxboro by day, and at night he would repair watches.”

When J.W. decided he’d like to have a classy-looking showcase, he decided to build it himself, Ashley says. “One very cold night, he went home and told my grandmother, ‘I’ve got to show you something, so he took her to the store, and they walked in and he showed her this showcase with a bare wood bottom and four little rings. My grandmother was shocked. She took off her scarf and put it in the showcase, so the four rings were displayed on the scarf in this little showcase. My grandmother said he was so proud of the showcase. They lived through the Depression; I believe my grandmother still had her first pair of shoes!

“My grandfather was so creative – it’s no wonder he got into making jewelry. He was born to be in the business.”

Education was held in high regard by J.W. Green, who had transformed the watch shop into a full-service jewelry store selling clocks, fine china and sterling flatware in the 1950s. “He went to the Gemological Institute of America and got his Graduate Gemologist, and he was very proud of that,” Ashley says. “In the early 1980s, my father, Sam, followed in his footsteps and earned his master’s degree in kinesiology from Wake Forest University. He was also a football coach for some time in Kinston before packing up his five kids and moving to Roxboro. My grandfather said if you don’t know it, you can’t sell it. So my father got his GIA.

“He works in banking now. But if I ever get in a bind, I call him and he’s right there for me!”

Ashley also studied at UNCG, earning a degree in Business Administration with a concentration in marketing. “I knew I wanted to be in the jewelry business, but I wasn’t going back to Roxboro. I was staffing an emergency room. But after my daughter was born, I called my father and grandfather and said, ‘Please can I come and work in the business?’ And they said yes. So in 1993, right before Valentine’s Day, I started working here. My grandfather said, ‘You’ve got to go to GIA, so I got my Graduate Gemologist – and I think I was happier to get that than I was to graduate from college!”

Ashley’s father died unexpectedly when she was taking her GIA courses. “Actually, I was working on one of the first, the diamond course. After the funeral, someone came in and wanted to buy a diamond. I said just a moment, and called Gene Starnes, a jeweler in Albemarle, and said ‘I’m in big trouble. I have a customer who wants to buy a diamond, and I don’t know what all the terminology means, what the letters, numbers mean. I’d return to the customer, then excuse myself and get back on the phone with Gene for more information. So Gene and I sold my first diamond over the phone 25 years ago! It shows how close this industry is. You pick up the phone and someone will help you. I will always try to pay it forward. It’s so important to me. I was terrified, and Gene helped me.”

Ashley is proud to be past president of the North Carolina Jewelers Association, as was her grandfather. “Being involved in those organizations is so helpful. Several years ago, I needed a head for a ring the next day. I called a jeweler who was recommended and I’d never met; he Fed-Exed the ring and I received the ring the next day. I had never met this jeweler, but he didn’t hesitate to send me what I needed.

“The people who have inspired me most are Jim Ackerman with Ascend Marketing, Chip Terry with IJO and Brad Huisken with IAS Training, by taking their seminars and developing relationships. When I was ready to close the store and throw in the towel, I’d call on them for marketing help, and they’d encourage me to come down off that roof and see the light at the end of the tunnel. So developing relationships with people like that has helped my business tremendously.”

Friends and family – that’s what it’s all about for Ashley. “I told my daughter Lauren she can start working at the store when she’s able to see over the counter,” Ashley laughs. “She graduated from UNC and is now in graduate school – and will help out at Christmas. She’s getting her master’s degree in social work.

“We are the oldest continually owned family jewelry store in North Carolina,” she adds, “and we have wonderful employees. One has been here 19 years, one 16 years. I could not have run this business without them.

“If it weren’t for my strong faith, I would have thrown in the towel. I lean on God to get me through things, and I would not be sane if not for my faith. God has blessed me and my life, and I’m so thankful. And I remind every customer that if it weren’t for them, I would not be in business. Even if they don’t buy something, they’ll tell someone else about us.”

It’s a solid business practice, one that’s seen Green’s Jewelers through a century.

For more information about Green’s Jewelers, call 336-599-8381, e-mail greensjewelers@yahoo.com or visit www.greensjewelersinc.com. Green’s also can be found on Facebook and Instagram @greensjewelers.