Masters of Marketing – A century of sparkling insight – Part 2

The transformation of Detroit, Michigan, from a frontier outpost to a busy downtown city was just about complete by the 1860s. As 1870 dawned, the city of Detroit was almost 13 square miles in size, ranked 18th in size in the United States, with a population of nearly 80,000 people.

By 1886, streetcar lines connected through 42 miles of Detroit, immigration from foreign countries was beginning to hit its peak, and the economy was booming.

Against this backdrop in 1889, and about 150 miles away from Detroit, 25 year old Joseph Siegel founded Siegel Jewelers in downtown Grand Rapids, Michigan.

Joseph, an immigrant from Russia, came to America in 1881 by himself at the age of 17. The railroad network in Michigan had experienced a massive expansion after the Civil War, and Joseph’s skill as a superior watchmaker became invaluable to passengers needing an accurate time piece to ensure that they did not miss their train.

By the 1890s, Detroit and its surrounding areas were beginning to emerge as an epicenter of big industry. Manufacturers in three key industries, ship building, stoves and railroad cars were starting to make a name for themselves, and as these industries grew and flourished, so did Joseph. Success meant the addition of jewelry, diamonds, silver and even eyeglasses, all items wealthy clients of Siegel Jewelers were eager to purchase. 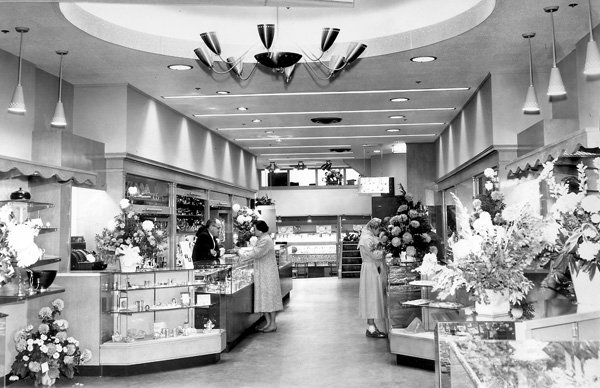 Shortly after WWI, Joseph’s two sons, Norton and Arthur, joined him in business. They both took an interest in the community, and became active in various Grand Rapids service organizations. Arthur, an optometrist, opened an office in the Grand Rapids location and Siegel Jewelers began providing eyeglasses and vision services to the community in addition to watch repair and fine jewelry.

Miller Siegel, Norton’s son, joined his father, uncle and grandfather in the business. Miller, one of the first Graduate Gemologists from GIA, also had a business degree from the University of Michigan. His accounting and business savvy, combined with a love for jewelry, proved to be invaluable to the family business. The Siegel family believes it was a combination of the strong connection to the community, along with years of smart business practices, that enabled the company to survive the depression when most jewelry stores failed.

128 years later, Siegel Jewelers continues to thrive. Today, the 5th generation, along with Miller’s sons Jim and Joel, continue the Siegel tradition by adapting to meet the needs of customers and surpassing their expectations.

I had a chance recently to speak with Jim Siegel, who graciously walked me through the family history and business philosophy, and spoke with me about his father, Miller Siegel, who worked in the store until he was 95, and how Siegel Jewelers has changed and grown throughout the years.

Miller Siegel, it seems was not only smart and tough, but he genuinely loved the jewelry business and took a lot of pride in his relationships with his customers. Because he grew up in the business, he understood all aspects of how it worked. Miller truly loved being a merchant, and embraced the responsibility that came with being a steward of a multi-generational business. This passion for his career led him to conceive and implement some very innovative techniques for inventory control, as well as develop very creative and progressive marketing campaigns.

It’s clear to me that Miller’s reverence for family tradition and the jewelry industry is deeply instilled in his sons, Jim and Joel, as well. When I asked Jim what he thought the secret to Siegel Jewelers success was, he told me, “Our focus is how to stay relevant for our next 128 years. Our legacy and relationships with our customers guides our focus, and long term plan, which is to continue to grow.” 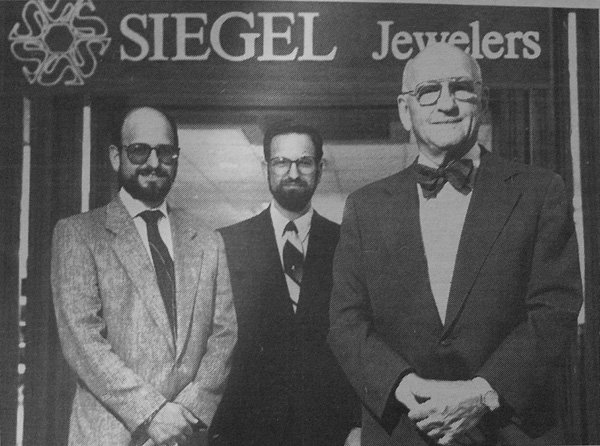 Jim explained to me that he is a big believer in putting a lot of resources into finding and keeping top staff. Siegel Jewelers has two staff meetings per week, one to address the operational side of the business, and one to address areas of personal growth for the staff. The store highly encourages its staff to become involved in community events and organizations. Jim and his brother Joel are both more than extremely involved in networking, and serve on several local and state boards for the betterment of their community, and the state of Michigan.

This is an area where Jim feels a lot of businesses within the jewelry industry miss out. Most stores, he shared with me, are either too busy or too disinterested to take advantage of community interactions. Events such as local auctions, charities and fund raisers are great opportunities to interact with the community in a meaningful way that benefits everyone involved.

Siegel Jewelers makes a practice of integrating many of its special promotions in community settings. For example, a “Diamonds and Dudes” event is held in conjunction with a local bar, which creates a relaxing and enjoyable atmosphere for attendees of that event. They also make a practice of setting up at local wine and cheese festivals, so they can reach prospective clients and connect with them face to face in surroundings that are fun and casual.

Customers who step through the doors at Siegel Jewelers won’t find the traditional mix of products most retail jewelers stock. Instead, Jim explained, Siegel Jewelers places a special emphasis on buying and selling estate and antique jewelry. Today’s customers, Jim believes, are all about maximizing the value of everything they have. Reusing, repurposing, reinventing, these are the philosophies that drive the thought process behind the majority of customers who shop at Siegel Jewelers. By positioning themselves as “Estate Jewelry Merchants,” the company has become experts at buying and selling estate goods, which allows them to play all three markets, liquidation, wholesale and retail. The outgrowth of this savvy strategy is what led to estate jewelry becoming such a significant and unique part of Siegel Jewelers’ business. 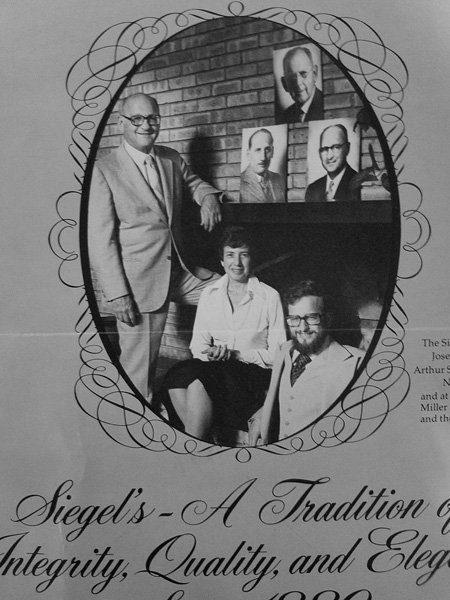 Jim and Joel continue to work side by side in their family business, accompanied by the 5th generation. Business responsibilities are split between the two brothers, and each handles the areas in which they shine. I asked Jim for some final thoughts that he might share with jewelers who were looking for a unique way to connect with today’s consumers and he said: “My father was a firm believer that people love a story. At Siegel Jewelers, we sell the story, not just the jewelry. I have created and attached a story to each piece of jewelry in our showcases. That way, when our staff shows a piece, they can provide more than the basic description of the item the customer is looking at. This gives them the opportunity to personalize our jewelry and connect with the customer by sharing some romantic background about the piece with them as well.”

Join us next month for Part III of “Masters of Marketing – A Century of Sparkling Insight.”