Masters of Marketing – A century of sparkling insight – Part 3

As W.C. Fields once famously said, “It ain’t what they call you, it’s what you answer to.”

Since its settlement in 1788, the city of Cincinnati has been called many things; “Queen City of the West,” the “Paris of America,” and the “First American City.”  But in the 19th century, the name that best described Cincinnati was an “American Boomtown.”

Located in the heart of the country, Cincinnati stood as a jewel amongst the larger U.S. coastal cities comparative in size and wealth, and was recognized as the largest city in the west.

The exponential growth Cincinnati experienced in the 19th century was due largely to the Ohio River, and the many business opportunities it provided.  Businesses such as hotels, restaurants and other establishments blossomed to meet the demands of settlers who were traveling westward on the Ohio River.  The city also became a destination for farmers, who would bring their crops to Cincinnati and have them sent down the Ohio River to New Orleans, which was one of Ohio’s major markets.

As 1890 dawned, Cincinnati had cemented its position as a major industrial, political, literary and educational center within the state of Ohio, as well as in the United States. With over fifteen railroads connecting Cincinnati to other parts of the United States, it became a hub not only for shipping, but for iron production, meat packing, cloth production and woodworking as well.

In the midst of the Cincinnati boom in 1896, C. Edward Richter and three brothers named Phillips decided to open a store in the heart of the downtown area. The Richter & Phillips Company, as the store was known, offered a wide selection of products in their showroom, including displays of jewelry, diamonds and giftware.

During that time, The Richter & Phillips Company also employed salesmen to travel all over the country with large trunks full of jewelry, to make sales to other jewelry companies that began opening across the United States. These salesmen traveled incognito by train when possible, and horse and buggy when necessary. Disguised as hardware salesmen, their biggest territories included Oklahoma and California.

Over the next forty years, Mr. Richter and the Phillips brothers worked hard to continue the company growth. The downtown store was thriving, and the catalogs and traveling salesmen were generating revenue as well. In 1930, despite 40 years of growth and success, the Great Depression proved too much for The Richter & Phillips Company, and it was forced to file for bankruptcy.

Frederick W. Fehr, a traveling diamond salesman who had supplied diamonds to The Richter & Phillips Company, recognized an opportunity to save the company, and establish a business of his own. He took some of his loose diamonds to the 2nd National Bank, which loaned him the money he needed to buy the store out of bankruptcy and keep it open. 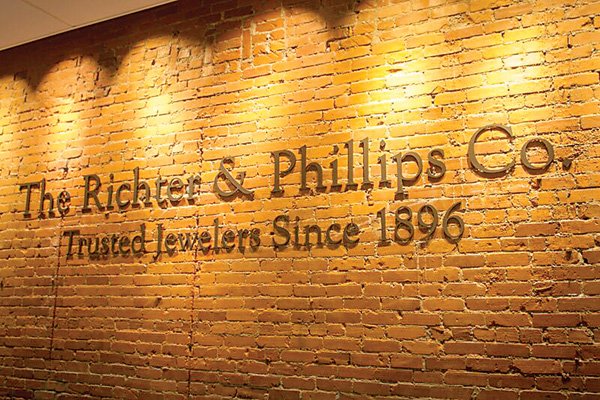 Gradually over the next few years, Mr. Fehr was able to buy out all the remaining stockholders, and turn The Richter & Phillips Company into a family owned business. Mr. Fehr and his right hand man, Lawrence Fledderman, continued operating The Richter & Phillips Company throughout World War II, from the downtown Temple Bar Building located at the corners of Court and Main Streets.

Business continued to grow downtown for The Richter & Phillips Company until the early 1970s when Fred Fehr, Jr., decided to branch out. Under a different business name, Richter & Phillips Jeweler and Distributors, Mr. Fehr, Jr., opened two new locations. The new locations were equipped with much more space than the downtown location, so these two stores became the centerpieces of the catalog business, and displayed and stocked all the items featured in the catalogs. 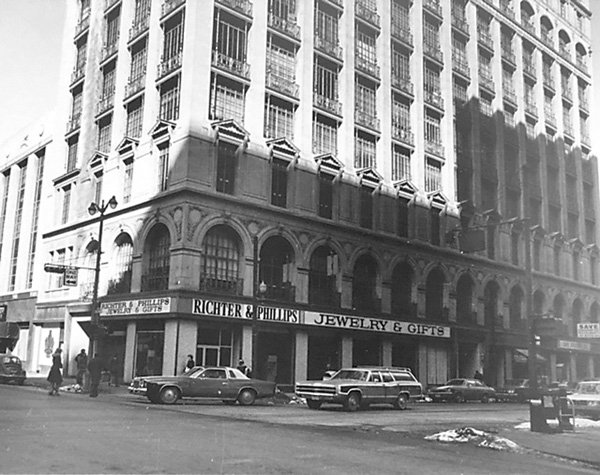 Changing demands within the markets and from consumers gradually weakened the success of the “catalog store” model, and both of these stores were sold in the late 1970s. Eventually the entire catalog store model collapsed, and the stores went out of business entirely in the early 1980s.

Without the additional space to support an abundance of merchandise, and because of market conditions, The Richter & Phillips Company decided it was time to let go of the catalog business altogether, and begin focusing strictly on jewelry, diamonds and giftware sales.

When Frederick W. Fehr retired at the age of 90 in 1972, he turned the business over to his son, Fred Fehr, Jr. Ten years later, Frederick W. Fehr, III (Rick), fresh from receiving his Graduate Gemologist certification, joined the staff at The Richter & Phillips Company and took over both the purchasing and sales of diamonds and gemstones.  Fred Fehr, Jr.’s son, Arthur Fehr (Art) followed in the family footsteps and joined the staff after becoming a Graduate Gemologist in the early 1990s.

Eager to explore more about this family business, I connected with Rick’s son, 4th generation jeweler Eric Fehr, (Frederick William Fehr, IV) to discuss the state of the business now, and get his thoughts on what the secret to the continued success at The Richter & Phillips Company is. 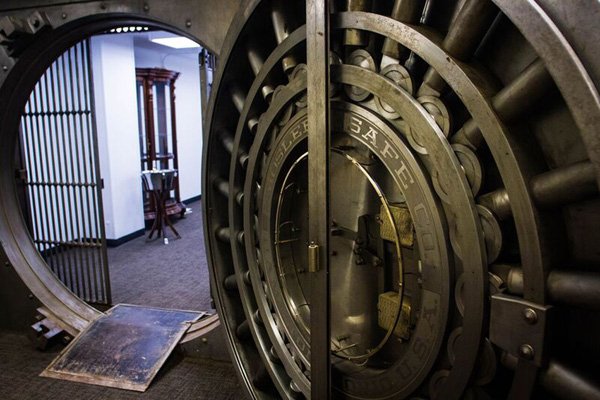 Part of what continues to drive the success of this extremely busy location is the fact that it is centrally located to some of the biggest corporate offices in the city of Cincinnati. With Procter and Gamble headquarters on one side, and the headquarters for 5th/3rd Bank as well as the Federal building located across the street, The Richter & Phillips Company stays busy from open to close serving customer requests for watch batteries, repairs, last minute gift-giving ideas and general day-to-day jewelry sales.

Eric also shared with me that this is a trial year for marketing in the store as well. While the marketing mix for The Richter & Phillips Company used to be heavy in radio, billboards, print and TV, they have recently made a decision to move away from a large investment in traditional marketing, and move more of those dollars into the digital space, which includes SEO, PPC, display advertising and other digital opportunities. Eric explained they found themselves frustrated that they have a beautiful store, and over a century in business, but could not break page one on Google through an organic presence.

As the direction of the digital marketing changes, so, too, is the focus of the business. The company made a huge investment in its new showroom, changing the look and in-store “feel” completely from a family-room style atmosphere to a very prominent, upscale looking space, while still keeping a welcoming, family environment. 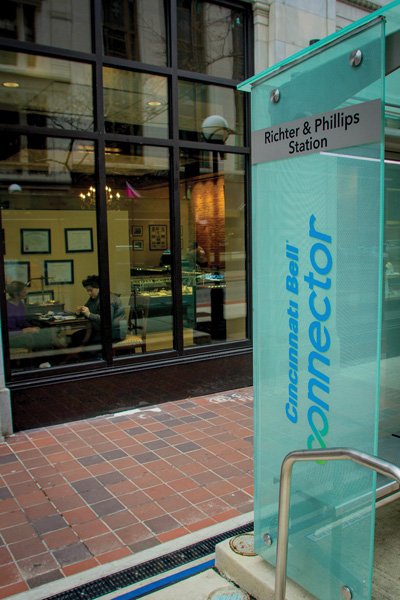 In terms of merchandise, Eric shared with me that 60 – 65% of their business is bridal, so the focus will remain on continuing to dominate the city in that area, and stocking 20 brand name bridal lines, including Tacori, Verragio, Henri Daussi, and Michael M.

The statistics on The Richter & Phillips Company engagement sales reflect trends that I have been noticing for several years. Eric said that 3 out of every 10 engagement ring sales are custom, and that most customers who come into the store with a photo from Pinterest just want to see something “like” the photo, and don’t care about having a name brand attached to it.

This has lead the company to question whether or not its primary focus should be on name brand lines, or to branch out and build its own brand, based on private label and custom design.

Most of 16 full-time and 2 part time employees of The Richter & Phillips Company have been with the company for years. That count includes 4 staff gemologists plus an in-house jeweler and a watchmaker. Customers have their own favorite salespeople, and that loyalty runs deep, fueled by salespeople who deliver a personal touch, and take time to invest in long-term relationships, rather than just a sale.

As a family owned and operated store, decisions are made on the show floor immediately, and The Richter & Phillips Company is careful to maintain and manage its brand and reputation. The store works hard to maintain its strong ties with the community, and uses its position as the “Official Jeweler” of the Cincinnati Reds to promote special events whenever possible.

In closing, I asked Eric for some final thoughts on the business that has been in his family for four generations, and he said, “We are probably still doing some of the same things we were in the 1890s, and these are the things that have contributed to our long term success.  But as long as we also keep striving to keep things fresh, and aren’t afraid to try new things, our business will continue to grow and evolve.”