A new portable bench torch is one of the latest creations of a company that’s enjoying the success of a “cultural change.”

Miniflam USA, Inc. is an established, Maryland-based distributor of dental tools, working with Prodont-Holliger, SA, the largest manufacturer of dental tools in . Now, the company, whose products are sold in over 40 countries, has branched out into other industries, including jewelry, telecommunications, hobby, optics and electronics. 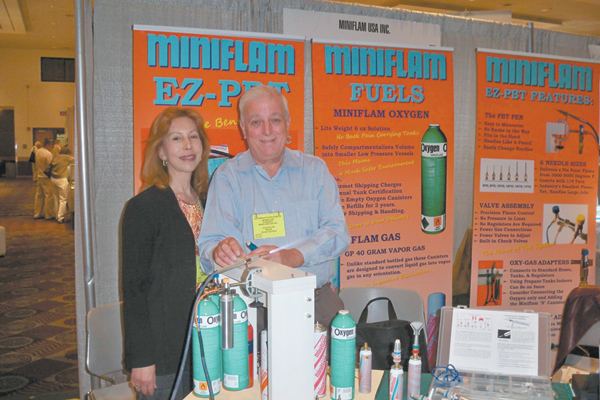 Jean-Luc Ponsart, general manager of Miniflam USA with his wife, Athanasia, at the AGTA Tucson Show.

In the jewelry business, the new torch, called the EZ-PBT, offers more precision, ease and safety than ever before. The system’s small oxygen and gas tanks are safer, easier to transport and easier to work with.

“The people who use it realize just how much more of a precision tool this is,” says Jean-Luc Ponsart, general manager of Miniflam USA. “We have a culture right now where everyone buys certain torches in the industry, making their decision to buy according to how things are being done now.

“What the dental industry has known is that our tools are much more precise than what’s been out there.”

Expanding Miniflam’s technology to other applications “is something I’ve wanted to do since 1987,” adds Ponsart. “Back then, our high-temperature torches were really suited for what I would call occasional users. Basically, we had no way to attach our torches to large tanks.

“About two years ago, the management took a change, and a younger engineer came in and replaced some of the older people who were in there. He was probably the first one who responded to what I was saying, which was that we had a fantastic delivery system, and that we should open up the market so they could tie it into larger tanks.

“We’re finding today that there are a lot of people out there who prefer using the smaller tanks because they’re just so much safer than the larger ones.

“Basically, the proof is in the pudding. Our sales have really gone up because of this new format. It’s a cultural change, really.”

From Dentistry to Jewelry

Miniflam traces its roots to a company in called Formadent, which was sold to the much-larger Prodont-Holliger around 1988. Formadent was selling its products in the dental education area in the even before Ponsart joined the business in 1987.

“The products were originally designed by a prosthesis maker,” Ponsart says. “He could not find any tools to work with waxes and for doing bridges and things of that sort, so the whole line was originally developed for that. They made all sorts of educational models. They had the perfect set of teeth, and they made models including those where people could practice doing root canals.

“In the dental industry, it’s been relatively solid all these years,” Ponsart adds. “Once we had the adaptors to put onto large tanks, it just changed the whole paradigm. What I’m finding is it makes our delivery system, even with our oxygen canisters, which we’ve been doing since I’ve been involved, much more viable. It gives the end users the choice, based on their needs.”

The basic EZ-PBT, with two small needles, one oxygen canister and one gas canister, is ideal for doing tasks such as beadwork.

“The idea behind it is that with the valve assembly and pen, which is basically the delivery system, somebody in school could get in for under $200 and actually start working,” Ponsart says. “They’d still have to buy oxygen and gas to operate it, obviously, but they haven’t spent $600 or $700 to get in there.”

The next option is for the customer to screw on three oxygen canisters with one gas onto the same unit. That one sells for around $300.

“Our customers buy the oxygen canisters in a 12-pack, and we refill them for free for two years,” Ponsart says. “Then it’s going to cost a couple of bucks a can to refill them.”

“The gas is a mixture of propane and butane, and what the butane does is it calms the propane down, and it gives you a lot more control to light up a micro-flame, something the size of a period on a page. It gives you a lot more precision. Whereas with propane, people have admitted to me that they don’t even use the three smallest tips. That’s where we excel. We also increased the sizes of the needles so that we can get larger flames, and that’s worked out really well.

Besides precision, the EZ-PBT offers a variety of benefits, including hazardous materials issues. By compartmentalizing oxygen and gas into smaller, low-pressure vessels, the risk of explosion is reduced. The gas and oxygen can be shipped in lightweight canisters with no hazmat charges. For those who craft jewelry at shows, the lighter weight is a huge benefit.

The system doesn’t require regulators and hoses and uses fewer connections, reducing the risk of leaks. Canisters don’t need to be chained to a wall and can operate from any orientation. Miniflam promotes the PBT pen itself as fitting naturally in the hand, like a pencil. It’s easy to maneuver with no knobs in the way, and needles are easy to change.

Miniflam probably will end up giving the EZ-PBT its own website, Ponsart says. “In the last two years, we’ve had two products that we’ve been test-marketing. This one is still in a test market phase, but it’s been extremely successful. So we’re going to a much larger production on this torch.

“The rest of our line has been very successful. We have hand products, hand torches, that work without the oxygen, with just the gas, that have really taken off in the jewelry industry.”

The company is also working on developing online sales. “We’ve had a lot of interest from different dealers out there,” Ponsart says. “The word is getting out, and we’re getting more and more calls every day. More and more orders are being shipped out.

“I’m pushing a new culture, and the response has been tremendous so far. I will say, we’ve been persistent enough to stay in it all these years, and I think its time has come for a lot of different people.

“We’ve been around for a long time. We’re pretty solid; we know what our markets are.”

For more information about Miniflam USA’s EZ-PBT or other products, you can call 800-232-3370, send an e-mail to miniflam@verizon.net or visit www.miniflam.com.