My mama used to tell me, “You can’t judge a book by its cover.” It’s one of those euphemisms southern women threw around like sweet tea or homemade pound cake. And, the older I get the more truth I find in them, making me think, once again, mama is always right.

Delbert Fentress is one of the best living testimonies to the ‘book and cover’ saying I’ve ever known. The mild mannered, 60 plus year old custom jewelry designer has all the characteristics of a true jewelry artisan, including a love for the craft and true joy when customers are happy. But don’t assume you know his type. This quietly talented, soft spoken man has rubbed elbows with rock and roll royalty and, in spite of his many brushes with fame, he remains a most pleasant, humble man. 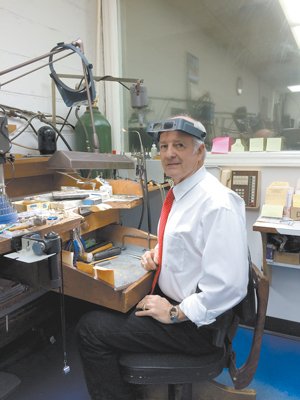 Think of the classic rock and roll artists of the ‘70s and ‘80s and big names come to mind: Billy Joel, The Eagles, The Who, Queen and The Bee Gees. To my generation they are legends – true talents among their peers, but to Dell Fentress they were more than just legends, they were acquaintances, customers and occasionally friends.

It all started when the 23-year-old began taking self-defense classes in his hometown of Greensboro, NC. He’d been working in a local jewelry store since he was 17, learning the jewelry trade and dabbling in jewelry repair. But the single guy who’d discovered he had a talent for jewelry design and had recently graduated from jewelry school, decided to take on security jobs for local concerts at the Greensboro Coliseum. Working for a concert promoter, Dell began his night job – working security.

“It all started when my kung fu instructor asked if I wanted to help out on a security job for local concerts. I needed the extra money, was single and young and loved music. It seemed like the perfect part-time job.”

And he was right. Working part-time at night didn’t interfere with his jewelry business and it was a great way to see his favorite bands. What he didn’t realize was that he’d gain personal access to some of the most famous musicians of the decade, and how it would positively impact his jewelry career for decades.

“I’ve had the privilege of meeting bands like Boston, The Who and Bob Seger,” recalls Dell. “And I’ve had to the privilege of creating custom jewelry for many famous people, but what I’ve come to realize is they are regular people just like me and you. Some weren’t approachable, but many were kind and took a personal in terest in my jewelry.”

One group with an interest in Dell’s jewelry was The Eagles. While working a meet and greet with some very attractive female fans after their concert, the band caught a glimpse of the gold eagle pendant Dell was wearing. They asked about it and Dell explained he’d made it.

“What was crazy about The Eagles noticing my pendant was the fact they were surrounded by beautiful girls and, yet, noticed my eagle pendant. It was a custom design I’d created for me, but they liked it so much they asked me to make one for the entire band.”

Dell agreed to make seven gold Eagles, each with a diamond in the claw. The only catch was the band wanted them completed in seven days! For the next seven days Dell worked day and night to complete the job. He delivered them on time and had the satisfaction of seeing Glen Frye and the rest of the band wear his custom designed pendant.

Ask Dell who he got to know best and Billy Joel is top of mind. When the Piano Man came to town he was on his way to the Greensboro Coliseum for a sound check with Dell’s kung fu instructor when they stopped by Dell’s store. They asked Dell to join them. Dell went along for the ride. There wasn’t a soul in the Coliseum when they arrived and Dell watched Billy sit down at the piano and play a few things.

“He just sat down at the piano and asked me what I wanted to hear,” recalls Dell. “I asked him to play some Beatles songs and sat back and listened as he played just for me!”

Billy and Dell hit it off. Dell even received a personal invitation to Billy’s house party on Long Island that year. He describes the party as full of famous people, many of whom weren’t approachable, and the house as fairly normal, not a mega mansion. But it is Billy Joel whom Dell describes as one of the most extroverted musicians he met.

Dell goes on recounting many encounters with the music giants of that time. He describes The Bee Gees as the friendliest group he met. He recalls how they always traveled with their family, including their mom and dad, and would offer to feed everyone who’d worked the show a big meal.

His encounters with Charlie Daniels were equally entertaining as Charlie had Dell make him a custom hat pin with the letters CDB. Charlie was so pleased he asked Dell to go with him and work security for the next two shows. Dell agreed and Charlie introduced him to Delbert McClinton back stage.

But perhaps his most famous meeting happened the year before he started working security. It was a great stroke of luck when Elvis, who visited friends and family in Greensboro often, lost a diamond out of his ring during dinner one night. Someone at the restaurant told him that Dell could fix it and they brought him over to Dell’s store. Dell fixed his ring and went on the make a ‘Taking Care of Business” lightning bolt that had been originally created by a jeweler in Memphis. Elvis visited Dell often, asking questions about how he made jewelry and showed great interest in the stones and metal.

“Talking to Elvis was just like talking to a regular person. He didn’t put on any airs and he was very polite and cordial. He was a kind man who asked me to duplicate his TCB pendant, and I was happy to do it.”

Today Dell is content to tell the stories of his amazing life as a jeweler by day and security guard at night. While the memories bring him a lot of joy, nothing beats making a customer happy with a custom made piece or newly refurbished family heirloom.