NC jeweler trampled by herd of deer while opening store

For 25 years Michelle Brewer and her husband Kenny have owned and operated Brewer’s Fine Jewelry in downtown , , about an hour outside of . Tarboro is a rural, small city made up of tobacco farmers, hunters and a few small businesses. Renowned as a popular deer hunting destination, the locals aren’t surprised to see an occasional stray deer wander onto the back roads.

But on November 29th, Michelle Brewer had an encounter with more than just a stray deer. As she started to open the front door of her store around 9:50 a.m. she herd a loud car horn go off right behind her. Startled, she looked up to find a herd of deer moving down her side of the street. Eyewitnesses say the herd was moving fast, maybe 40 miles per hour, and they were coming right down , straight at her.

“I never heard them coming around the corner or down the street,” recalls Michelle. “I just wondered why someone was honking their horn. Then, when I looked up, I was eye-to-eye with a herd of doe and all I could see was the fear in their eyes.” 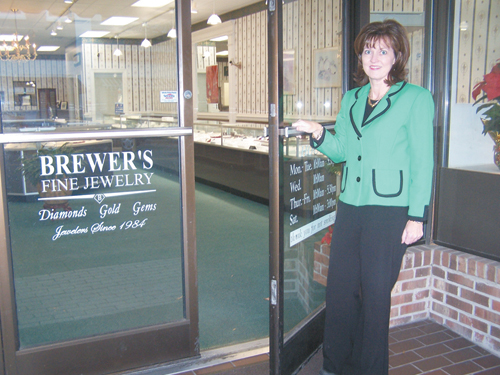 Michelle Brewer, looking none the worse for wear, after her encounter with a stampeding herd of deer

Other local business owners watched as the frightened herd spread out and left Michelle pinned against the unopened door as they ran side-by-side refusing to stop for Michelle or anything else that got in their way.

“I know the lady who honked her horn was trying to help but, in hindsight, it might have been better to have rolled down the window and yelled.”

Store owners from across the street watched in horror as the deer ran over Michelle, knocking her more than six feet in the air. But she didn’t slow them down. Once she was on the ground she continued to be trampled by the raging deer until the last of the herd was gone.

“Thank goodness I don’t remember being tossed up in the air. My husband ran to me and was kneeling beside me with tears in his eyes when I realized it was over. I started laughing and he kept saying ‘Michelle, this isn’t funny. It isn’t funny.’”

The deer left Michelle battered and bruised, but without serious injury; her right cheek had a golf-ball sized lump, her elbows were skinned and there were hoof prints on her right leg. She did not seek medical attention.

Neighboring businesses pitched in to help her with ice from the local restaurant, gloves from the beauty shop and moral support in the form of presents and well-wishes.

But the biggest shock has been the media coverage. After the story ran in the local paper the Associated Press picked it up and all three local news stations sent crews to interview Michelle. And if that wasn’t enough, CNN picked up the story and ran it for a few days.

Now Michelle is a local celebrity. People stop by the store just to check on her or to make an occasional deer joke. She’s even had a group of hunters buy her and her friends a round of drinks at the local restaurant while apologizing for not doing their job with the deer.

But Michelle’s great sense of humor about the whole thing is the best part of the story. Talking to husband Kenny about the incident she said: “Next year it’s your turn to drum up some publicity to boost holiday sales.”

If you’d like to drop Michelle a little note drop by Brewer’s website at www.brewersfinejewelry.com or e-mail Kenny at carrotman1958@yahoo.com.