One of the most important choices independent jewelers make today is which automated software to use to run their business.

Kevin Seele certainly knows how to keep a jewelry store going. Kevin’s Fine Jewelry has been a Totowa, NJ landmark for 27 years. It currently has nine employees, and it’s done well enough for him to open up another branch 20 miles away. 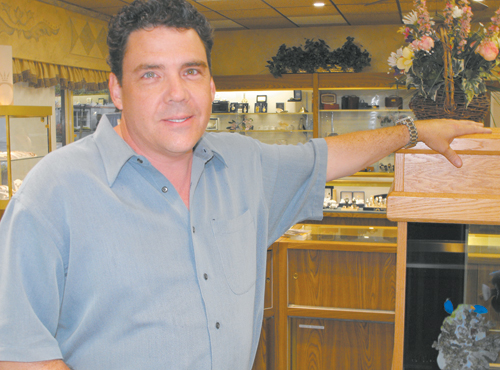 Kevin Seele, tech-savvy owner of Kevin’s Fine Jewelry in Totowa, New Jersey, says The Edge software is “absolutely critical” to the success of his business.

Seele is a jeweler who is comfortable with technology. He’s got a CAD CAM system to help design and create custom items, and a laser welder system so that he doesn’t have to send out pieces to do sophisticated repairs. But one of the toughest decisions he had to make was selecting the product he would use to run the business itself.

Making this choice wasn’t easy. But Seele said he made the right choice in going with Abbot & Shapiro’s The Edge jewelry software system. He feels The Edge, which doesn’t focus on making jewelry, but on getting insight, focus and control over his business, is the most vital tool he has. “It’s as important as can be. It’s absolutely critical,” he says of The Edge, which handles everything from his point of sale transactions to his marketing and inventory control.

Seele has used computerized Point of Sale systems for close to 20 years. He evaluates every piece of technology purchases in terms of costs, benefits, and its contribution to the bottom line.

But in the end, it wasn’t features that convinced him to start using The Edge. It was the people behind the company – especially cofounders Dick Abbot and Joe Shapiro. Abbot has been a jewelry store owner for decades, and the realities of the street are embodied in virtually every aspect of The Edge.

Seele was using another software product, that he was happy with when he discovered The Edge. “At the time I thought it was the best product in the marketplace. Then The Edge became available after Dick and Joe developed it. I was very, very fond of Dick Abbot, and his motivation and heart are in the right place. He’s not just selling software. He really wants to see his jewelers succeed,” said Seele.

Personal impressions translated into business success. Seele found that the program really did give him an edge. “The Edge is light years ahead of anything else we’ve ever used,” he says. Words are great, but results are what matters, especially to an independent businessperson. “When someone says something, it’s one thing. But when they prove it over and over that’s another.”

Much as Seele likes Shapiro and Abbott, he would have gone with a different product if he felt it was a superior product. But Seele feels they have met the key criteria anyone should look for when they’re investing in retail automation software:

1. Reliability. For something as important to a business as the software they use, stability and durability are essential. Seele says The Edge is the most stable, solid program he’s ever worked with. “It never, ever crashes,” he says. “If there’s ever an issue, it’s that the network is down, not that the software has crapped out.”

2. Connectivity. Seele has been successful enough to open two stores. Moving information between them is a vital part of his business. He says The Edge accomplishes that with ease. “We have two stores. The way the stores transmit data to each other is amazingly simple. It makes you feel that you have extremely powerful software.”

4. Empathy and action. Good software companies know development is a two-way street. That’s one of Abbott & Shapiro’s biggest strengths. When Seele has an idea or an insight he calls the company and in no time, there’s a new feature added. “They’re willing to listen and to make changes if something has a benefit for everyone who is using the software,” he says. “They’re so proactive.”

5. Expandability. The Edge can do more than just track digital information. With multiple features built into the system, it’s easy to incorporate a camera, something that improves everything from communicating with customers to tracking repairs. “We are able to take photos of repairs as we take them in and then attach them to work orders. The imaging part is very cool. It’s fairly easy to use and very stable.”

6. Insight. Once Seele could only track sales by gut feel. Now he knows what is moving and how fast, and, just as important, what isn’t moving. “We’re able to identify fast sellers and see trends as they occur,” he says. This makes a huge difference in everything from buying stock to setting prices.

7. Support. Every moment a jewelry store is open costs money. That means whenever an issue crops up, getting a quick response is crucial. And when Seele has needed help, he’s gotten it. Whether it’s a weekend or an evening, top-level people at Abbott & Schapiro have responded swiftly and effectively to his calls. “Once I had to call on a Saturday, when their office was closed. The next thing I know, I get a call from Dick Abbott, and within hours, my issue was resolved.”

8. Market knowledge. Sometimes, it’s the little things that count the most. Because The Edge is made by people who have deep knowledge of the industry, it has many different capabilities that reflect their intuitive awareness of the business.

9. Loyalty programs. Big companies from grocery store chains to credit card companies have set up loyalty programs. With The Edge, it’s easy for jewelers to do the same thing. “We have nice little personalized cards, and we give them out to people and they use them as gift cards,” Seele says. Anything that increases the customer connection so affordably is a crucial tool, especially in the current market.

10. Marketing assistance. Abbott & Shapiro has established an on-demand printing program that allows jewelers to send personalized postcards to their customers. This is an affordable and effective means of outreach, Seele says – and, since it’s integrated into the software, creating and exchanging mailing lists is easy to do. “You can even send out a single personalized postcard to a customer for as little as 89 cents,” he says.

“It’s very good to have,” Seele says. “Once you get the ball rolling, it keeps rolling, and that’s what you want in an automation package.”

Industry surveys show that “The Edge”, by Abbott & Shapiro, LLC, is the jewelry industry’s leading retail store management system. The is considered the industry’s top consultancy in providing jewelry Key Performance Indicators, business coaching, mentoring and specialized retail seminars.  For more information, call Abbott & Shapiro at 866-580-3343, e-mail sales@AJSLLC.com or go to www.AJSLLC.com. The can be reached at 877-569-8657 or e-mail carol@edgeretailacademy.com.