Once in a blue moon: How a silversmith’s design made its way to the Red Carpet

Bob Moon had been delving happily in his life’s work for decades, designing and making silver and gold jewelry at his small shop in – and then something remarkable happened.

He traveled to , to attend the grand opening of a remodeled theater arts department building and a new black box theater building at Virginia Tech, where he’d received a bachelor’s degree in theater arts in the ’70s. 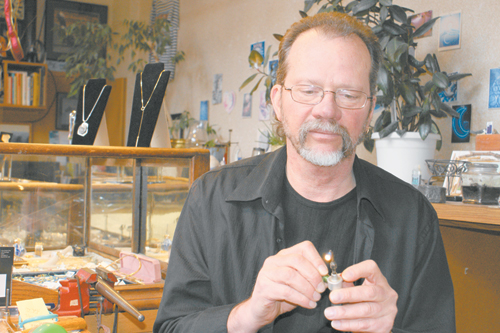 Jeweler Bob Moon at the bench in his store, once in a blue moon in Barrington, IL.

He still keeps a place in and regularly visits his old professors at the theater department. But this event was special.

“There was a woman doing a one-woman show in the new theater who had graduated from Tech as well,” Bob says. “It was a play she had written for her senior thesis there, and she had been asked to do the show for the premiere of the new black box theater building.”

The actress was the beautiful Michelle Krusiec, whose one-woman show “Made in ” was the centerpiece of the grand opening festivities. Since graduating from Tech, she has won acclaim for her role in the romantic comedy “Saving Face” opposite Joan Chen, and hosted “Travelers” for the Discovery Channel, in addition to many other roles in television (including “Cold Case,” “Monk” and “ER”), film and stage.

“The couple I was staying with went to see “Made in ” Saturday evening, and during breakfast Sunday, they insisted that I needed to go see the show, that it was that good!” says Bob. “So on Sunday evening, I showed up at the theater about 20 minutes early only to find out there was a waiting list 15 people long. The lady behind me found out she was number 16 and started into the ‘I want to see someone in charge’ mode.

“A young man came out and reassured her that this had happened for every show and not to worry, she most likely would get in. As he passed, going into the back stage area, I told him I was an alumnus and offered to sit in the catwalk if I had to, to see the show. He looked me in the eyes and told me he would put a chair on the stage for me if he had to, and walked away. I was left standing there, trying to figure out what to do next when he walked back out with a ticket and told me to go in and sit wherever I would like. I thanked him and almost felt embarrassed to go in with all those others ahead of me on the wait list, almost.”

Bob found a single seat front row and center, and sat down. “I looked behind me to see one of the department heads, Pat, with her teenage son,” he says. “The house went black and the show began.” 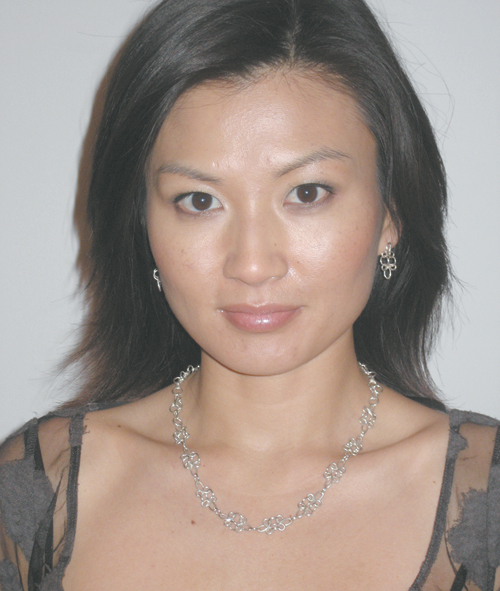 A chance meeting between jeweler, Bob Moon and actress, Michelle Krusiec resulted in Krusiec wearing Moon’s jewelry on the red carpet at the Sundance Film Festival.

The show was about Michelle’s life as a teenager, growing up with a mom from Taiwan and a GI Joe dad, how she wanted to dance and her mom would yell at her when she caught her dancing in her room, how she dealt with the fighting between her parents, her relationships as a teenager, her discovery of African dance and more.

“After an hour and 20 minutes, it was over,” Bob says. “I was impressed enough to want to go backstage and commend Michelle, so I asked Pat how to get to the dressing room.”

Bob says that as a theater person, he felt comfortable making his way backstage, walking through doors that most people wouldn’t.

“I knocked on the door, introduced myself and told Michelle what a great show it was. She was talking to the guy who had given me the ticket, so I thanked him again as well. I left.

“The next morning, I drove the rental car back to the airport for my 10 a.m. flight back to . As I was waiting to board the plane, I looked up and saw someone I thought was Michelle. She looked up and said, ‘Hi Bob, are you on this flight?’ I nodded and she said we’d talk on the plane. It was full and we were a long way apart, so we did not get to talk.

“When I got off the plane, I waited a moment. We found each other and walked down the corridor together. She was off to connect to a flight to LA, and I was going out.

“I asked her if she really danced as a teenager, because my daughter is a dancer. She asked what style, and I said ballet. She remarked that she had wanted to do ballet but never managed to get to it. I remarked that dance was absolutely my daughter’s drug of choice and she turned to me and exclaimed that that was a line in her play but she had left it out. She said it just seemed cheesy. I told her that it was fine, with everything else that had gone on in the play.

“As we were walking I told her I had taken my passion (for the arts) and turned it into silver and gold. Well, you could have knocked me over with a feather when she said, ‘I know.’

“How did she know? Well, turns out she had gone out after the show with Don and Libby Drapeau (one of the theater department founders and his wife), and when she told them about this alumnus who came backstage and Don found out it was me, he started into his ‘Oh, he’s a great jeweler’ routine.

“She told me that her eyes lit up when he said I was a jeweler. I had this necklace and earrings with me I had brought in hopes of selling, so I asked her if she would like to see some of my work. She was very impressed but did not seem to understand when I wanted to lend it to her. We traded e-mail addresses; she gave me a hug and thanked me as we parted ways.

“After sending her pictures of my work online, she commented that she needed me to make something for her fiancé and that we should talk.

“On the phone, we discussed the design and afterward I asked her if she could wear the necklace and earrings on the set of a “CSI: ” that she was filming. She didn’t think so, but assured me she would wear it to the Red Carpet at the Sundance Film Festival, as she had just found out she was going (as co-star of “Homewrecker,” which debuted at the festival). Suddenly, it seemed she understood why I lent it to her and we started talking about other stuff for other events.

“She also told me she had put the omitted line back in her show and thanked me.”

She thanked Bob in her January blog (michellekrusiec.blogspot.com), where she wrote: “I’d like to thank Bob Moon for providing me with great jewelry for Sundance. Bob gave me the perfect set of earrings and necklace. Sundance fashion is something that stays casual but chic yet practical for winter so thanks Bob – your set worked great.”

At his shop, once in a blue moon, Bob is a silversmith, goldsmith and jewelry designer, and he sells the work of about 10 other jewelry makers. He uses certified recycled gold and silver, and prefers to work with laboratory-created stones, paying respect to the environment.

Bob’s been in the business a while, making jewelry in before he even finished college. “Even though I have a Bachelor of Arts degree in Theatre Arts, I decided to create jewelry,” he says. “I have been making and selling mostly one-of-a-kind, or custom gold and silver jewelry since about 1971.

“I had a shop in until 1980 when I moved to the suburbs with my wife, for a job opportunity for her.

“The pendant I made for Michelle’s man has a black star on one side and a very textured circle with a tiny crescent moon on the other. His business has the words black star in the name, and her symbol is the moon.”

Imagine that, he muses.

“It’s such a special bond that we went to the same school and had the same professors,” he says. “We’re both very grounded in that respect.”

Bob says it’s a “beautiful recognition” that Michelle has given him. “It’s flattering, it’s one of the 15 minutes, and it’s fun. I mean, here’s a woman who is a movie star, and you can call her up and talk to her like you would your sister. It’s so beautiful.”

For more information about Bob Moon’s shop, once in a blue moon, you can call 847-381-7525, send an e-mail to designsbymoon@gmail.com or visit the website www.moondesigns.org.