Samuel Gordon Jewelers: On the forefront of a new frontier in marketing & sales

Daniel Gordon may consider himself “just a jewelry salesman,” but as president of Samuel Gordon Jewelers, he’s taken it to a new level in the age of digital marketing and social media.

Daniel, a fourth-generation jeweler at age 37, has 15 years under his belt with Samuel Gordon Jewelers, a store that dates back more than 100 years. But Daniel is thriving in the present, with an eye to the future, diving enthusiastically into the deep waters of social media and networking. He’s convinced it’s the way to go to keep his Oklahoma City business a leader in the jewelry industry. 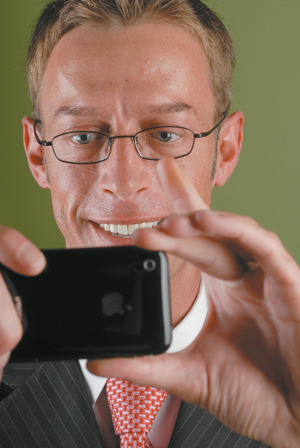 Creating the firm’s website was just the beginning of Daniel’s initiatives. He has more than 20 presences on the Internet, including Facebook, Twitter and LinkedIn. By using his social media and networking websites, the company communicates constantly with thousands of people.

Samuel Gordon Jewelers has come a long way since its less-than-high-tech beginnings, when Daniel’s great-grandfather, Samuel, started a family tradition of taking on new frontiers.

“My great-grandfather immigrated from Europe,” Daniel says. “When he got to the United States, he traveled by covered wagon. He sold costume jewelry, trinkets and whatnot. When he was going west, he stopped in Oklahoma City and started a business that’s been here since 1904. His job was to build a business, and he made a name for us.

“We were downtown. Back then it wasn’t outside the realm of normalcy to sell not only jewelry; we were selling silverware and appliances. We were an everything store.

“In the second generation, my grandfather focused more on the jewelry business. It was the first jewelry store in Oklahoma City. Then my father came on board and reinvented everything.

“He turned our three main locations into one superstore in 1991, with 12,000 square feet. He made it more contemporary.

“In 1996, I started in the business after Dad had found this location, which used to be a Goodyear, right across the street from a large shopping center and near an exclusive neighborhood.

“The store continues to be updated, reinvented. We carry designer lines – always high-end, but comfortable for anyone.”

Daniel, who has diamond certification from the Gemological Institute of America, says that while he has a huge respect for gemologists, “Everything I have learned, I learned by doing. It’s worked OK for me.

“My attention span is small and that’s why I can do all the things that I do,” he laughs. “I have a passion for marketing and communications.

“In the ’90s, I saw the Internet, dialup on AOL, for the first time. It connected, and all this stuff popped up. I thought, someday this will be ingrained in all of our lives, and this will change the world.”

Even as a boy, Daniel loved computer games, electronics and gadgets. He says he’s lucky to now be putting that passion to work.

“A lot of people these days have a Facebook page, a Twitter account or a LinkedIn presence,” Daniel says. “They’re all great, and they serve different purposes. But what I’ve come to learn is that within themselves, they do nothing. You have to utilize them as tools.”

Thus, the multiple presences he utilizes via computer and even telephone.

“Facebook gives you the biggest crowd, the largest population; it’s worldwide,” Daniel says. “It’s a great way to be where everyone is. Facebook is a great tool to get a two-way conversation, to humanize your brand or organization.”

It’s not about how many friends you have on Facebook, he adds, “but having the right connections.”

“The funniest thing I’ve ever heard is having a teenager do your Twitter account. The truth is, most people on Twitter are high-income, highly intelligent; they’re influencers in business.

“It’s a conversation, as opposed to Facebook,” he says. “It’s an ongoing conversation 24 hours a day, seven days a week.”

LinkedIn is a must for marketing jewelry, as well, Daniel says. “It’s all business, a great way for me to get connected, to find buyers and networking opportunities.”

One avenue that’s highly overlooked, he adds, is e-mail marketing. “E-mail marketing can be more powerful than the social networks. It’s extremely important, as is blogging,” Daniel says.

The company recently launched an iPhone and Android app, which Daniel calls an amazing tool to draw in customers and media outlets.

“And Flickr is great, not only as a photo page, but for the RSS feeds,” he says. “It’s very vital, the using of feeds to throw content to other places. It’s under utilized.

“YouTube has been a great tool, too,” Daniel says. “Basically, you can have a web video show, and you put the logo in the background and offer anything you can do instructional-wise.”

With web video, the jewelry industry has a great opportunity, Daniel says. He advises keeping an informational web video – on how a ring is cast, for example – to no more than three to five minutes.

“People want information,” Daniel says. “By putting the information out there, more people than not will come to see you as a result of you informing them. We’ve told our employees to write down what people ask us about the most, and we answer their questions.

“All I’m trying to do is break down the stereotype, the stigma, that all high-end jewelry stores are stuffy,” he adds. “So when a customer comes in, the tension is gone because we all feel we are knowledgeable.

“We have a big, beautiful store. It’s so big it can be intimidating, but the corporate culture is very down to earth.

“What a business needs to do is give free information, helpful articles that will add value to people’s lives, and expect nothing in return. The result will be so much more.

“Give everything you’ve got and get back more than you ever thought possible.”

For more information about Samuel Gordon Jewelers, you can call 405-842-3663, visit the website www.samuelgordons.com or send an e-mail to info@samuelgordons.com. To check out Daniel’s blog, go to blog.sgj.com.