Sometimes you are lucky enough to cross paths with a true jewelry industry legend. You know who they are. They are the people who are so well known you only have to use their first name and everyone else knows who you’re talking about.  Well, I’m fortunate enough to have spent a couple of hours chatting with the legendary Sissy Jones of Sissy’s Log Cabin and, I must say, she is as amazing as legend has it.

At 70 years old, Sissy Jones has a story. In fact, she has several. She can speak to the difficulties of raising two kids as a single parent. She can discuss the challenges of starting a business. Better yet, she can ‘tell it like it is’ when it comes to marriage. But you are more likely to hear her gratitude towards all the people who’ve helped her along the way. And, you are certain to hear about her unwavering faith and miraculous dedication to doing things God’s way.

Creating one of the strongest retail brands in the country hasn’t been easy. Today she enjoys the fruits of her hard work, winning numerous awards for a myriad of reasons. And yet, her story began in the most humble way… in a dilapidated log cabin.

“One day I was driving by this old log cabin and I thought it would make a great place to show the antiques I’d been selling. I stopped to call the owner. The building was so old they were going to tear it down because the termites had taken over. So I asked if I could rent it and they agreed to rent the 900 square foot, 4 room cabin to me for $50 a month,” recalls Sissy. “My aunt and uncle loaned me $1500 to start my business and I was able to pay it back within six months.” 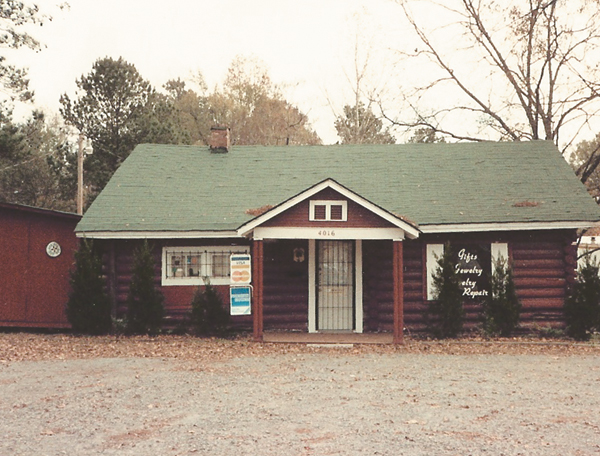 The original 900 sq. ft. building of Sissy’s Log Cabin in Pine Bluff, Arkansas. Rented for $50/month, the building had termites, a leaky roof and the only bathroom was on the front porch, but the price was right. In 1990 Sissy’s built a new 6,000 sq. ft. log cabin on a neighboring lot, and has since added another 6,000 sq. ft., a second store in Little Rock and a third store in Hot Springs is scheduled to open in 2011.

Never intending to start a jewelry business, Sissy started selling antiques in 1970 in her little log cabin. She specialized in antiques and decorating until one day someone brought her several estate jewelry pieces to buy. She realized there was a market for estate jewelry and set out to educate herself on jewelry.

Calling on a friend to teach her the jewelry basics, Sissy soon decided it was easier to buy, move and sell jewelry than large antique armoires. After months of mentoring. Sissy headed off to GIA to obtain her gemology degree, increasing her knowledge of jewelry.

Raising two kids as a single parent and owning a business is no easy task. Her son Bill and daughter Ginger spent plenty of time behind the counter helping, playing and learning about jewelry. As both the business and children grew, Bill learned the basics of bench repair and jewelry design from his mother. Eventually he decided to join the business after receiving his engineering degree. He went back to school to earn his GIA certification.

Growing up in the log cabin jewelry store had left its mark on him.

“The original log cabin was supposed to be torn down,” recalls Bill. “The floors were caving in, the roof leaked and the bathroom was out on the front porch without heat or air. We had to pour antifreeze in the toilet so it wouldn’t freeze. And we literally had to close the store every year when the termites swarmed. They would get so thick you couldn’t see.”

Through it all, Sissy kept going. She hired family and friends she trusted. She remained committed to her faith and started each business meeting with prayer. Thursday mornings were, and still are devotion time for the staff before the weekly training sessions, and every business decision was made by requesting guidance from above.

Sissy remembers: “Every night Bill and Ginger would say a prayer that their dad and I would get back together. Without fail I’d hear them asking for their daddy to come home. It would make me so mad at times, but their persistence paid off.  Murphy and I had been married for 19 years before we divorced; after 13 years apart, we remarried in 1988 and have been married ever since.” 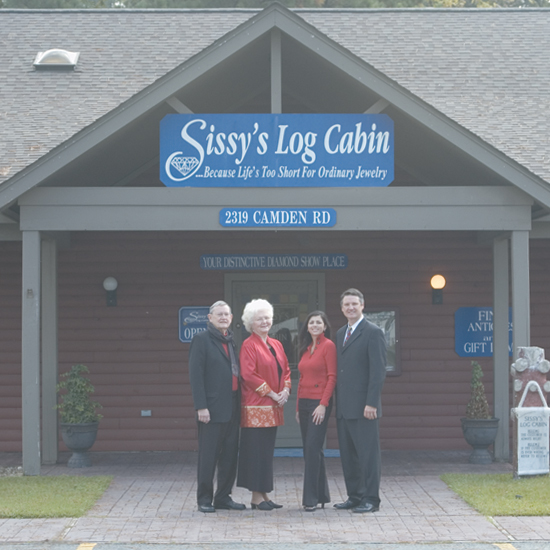 Murphy and Sissy Jones with their children, Ginger and Bill, outside Sissy’s Log Cabin.

Bill’s dad, Murphy Jones, who’d traveled the world as a successful engineer, soon realized the family business could no longer make it in the dilapidated original log cabin. In 1990 he convinced Sissy and Bill to invest in building a new log cabin right around the corner from the original. With 6000 square feet of space and in-door toilets, the new space was a big leap of faith.

“Mom and I probably wouldn’t have left the original log cabin if it hadn’t been for dad. We’d still be there. When we moved out of the old cabin and into the new one my whole family was working for the store at that time. Ginger was helping out and dad had joined the payroll too. It took all of us working together to make that happen and it was the best thing we ever did.”

Ten years later, with the business growing by leaps and bounds, Sissy’s expanded on the 10 year old building by adding another 6000 square feet of space. Bill tapped his engineering background and created the building plans for both the original space and the addition.

In 2010, as Sissy’s was considering a second location, Rolex contacted them requesting they open a store in . Although they had targeted as a potential second location, the deal that Rolex offered them was too good to pass up. In 2009 Sissy’s Log Cabin opened in .

As the Women’s Jewelry Association’s 2009 Retailer of the Year, a two-time national design winner, and former board member of JCK, Sissy continues to leave her mark on the industry. But she’s never forgotten her community. Recently she raised more than $65,000 with the help of friends and vendors as a tribute to her 70th birthday. They money ensured the Pine Bluff Symphony would continue another year of beautiful music.

“I was overwhelmed when we raised so much money,” Sissy exclaimed. “My vendors alone contributed more than $45,000 and I was truly amazed with the contributions.”

With a third location already in the works, look for Sissy’s Log Cabin to open sometime in early 2011.