For jewelers Jon Landon and Mark Meetze, boosting business in a dicey economy has been as simple as moving to where the money is.

Carolina Fine Jewelry is just that – fine jewelry – so it made sense to pull up roots and move to a location with a little more swank, a little more buying power. Now the store is nestled comfortably between an upscale furniture store and the elegantly casual Bonefish Grill in Columbia, S.C. 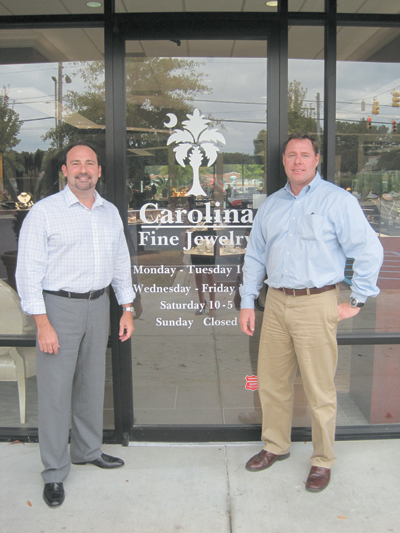 “We expanded,” Mark says. “It’s a much larger location with higher foot traffic, in a better area.”

Nearly doubling their rental space took some guts, but Jon says it’s already paid off since the August grand opening. “The numbers are up; we’re looking at our best year ever, since we’ve been keeping records – and we’ve been here only three months so far. There’s a lot more disposable income here.

“We have it so anyone can walk in and feel that they can buy something, but we focus on higher end.”

As the store’s website says, “We specialize in luxury items rather than necessities, and we appreciate the privilege of being involved in the special milestones in our customers’ lives.”

Jon Landon’s departure from Carolina Fine Jewelry’s old Two Notch Road location just off Interstate 77 opened up an opportunity for another Landon – his father, John, who started the family business as a coin shop in 1974. Since Jon and Mark vacated the old building, John has slipped back in at age 77 to resume his coin business. “That’s what he really likes,” Jon says.

“After my dad started the business as a coin shop,” Jon says, “we progressed to precious metals and we became wholesalers in the early 1980s. Around 1982, we became a freestanding jewelry store.”

Jon worked for his father during high school and some of his college years, then went on to work for UPS for 15 years before returning to work with his dad in 1999. Mark, who has 27 years of experience in the jewelry industry, had already joined the business in 1991.

The business partners remodeled the old store in 2003, but last spring set their sights on the new location on Forest Drive in the affluent Forest Acres area, a little over five miles down the road from the original business.

The high-end furniture store was downsizing and cut their store in half, leaving 3,000 square feet for Carolina Fine Jewelry to occupy. “We started with a shell of a building and did it all,” Jon says.

“Donna designed the layout of cases for the showroom, and they made the cases for us, too,” Jon says. “They did a really good job. We were going by Donna’s measurements. If you’re off by a few inches in one place, you could be off by a foot at the end of the line. It was important that we had the numbers right.

“Everybody worked well together – everything is just right.”

Carolina Fine Jewelry specializes in high-end jewelry, gemstones and diamonds, concentrating on bridal and selling a lot of white gold and platinum. “We have a lot of customers who will come in and pick out a diamond and pick out a ring, and put them together,” Jon says.

Among the lines available through the store are Lazare Kaplan, Simon G., A. Jaffe, Gabriel & Co, Fana, Parade and Janet Davidi.

“I’d put our inventory up against anybody’s,” Jon says. “We carry unique pieces. When people come into our store, I want them to see things that they haven’t seen anywhere else. We don’t want to be your average store; our jewelry isn’t one-of-a-kind, necessarily, but it isn’t mass-produced. We want customers to come in here and say, ‘Wow, I’ve never seen anything like this before.’ ” 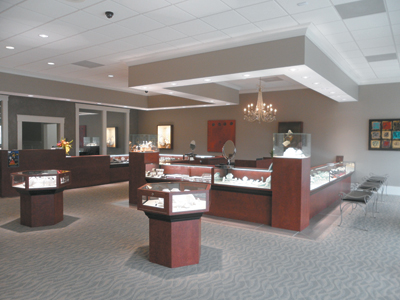 Carolina Fine Jewelry moved into this location in an upscale shopping center in August, doubling their size and increasing high-end consumer traffic.

With such a great start at their new location, what are the partners thinking about for the future? “To stay in business,” Mark laughs.

“We hope to keep growing,” Jon adds. “We will keep concentrating on providing great service. Our main goal isn’t to be in four or five locations; we just want to grow this business. Maybe in the future we’ll be in a larger, standalone building, four or five years from now. For now, we want to focus on quality.”

Plus, he adds, “We work well together. When I came back to work here, we became really good friends. I would work out with Mark at the gym at 5 a.m., then we would work all day together, and then we’d hang out together with our wives on the weekends. He’s my best friend. We’re like brothers.”

One thing Jon and Mark definitely have in common is the courage to take a chance. And by the time the economy gets back into swing, Carolina Fine Jewelry will be in a good position to profit.