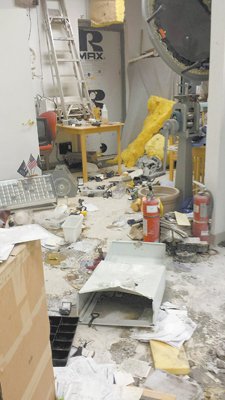 “But those who suffer he delivers in their suffering; he speaks to them in their affliction.” – Job 36:15 (NIV)

No one escapes life without some hardship, but some get more than their share. And, when those people are a part of the fine jewelry industry the huge hearts of their fellow members culminate in dramatic displays of unconditional love.

Wayne Sexton, owner of Jeweler’s Bench in Greenville, South Carolina, qualifies as a man who’s seen more than his share of suffering. From an early age he faced hard decisions head-on. At 16 he decided to leave high school to find work, and by age 18 he was married. Suffering a severe injury in his mid-thirties left him discouraged and unable to perform his welding duties for many months. But his strong faith and God-given artistic talent kept him sane.

In his early forties he left his successful, highly lucrative welding career of 25 years to open a retail jewelry store. Having dabbled in jewelry repair during his recuperation, he’d discovered all of his welding experience made repair easy for him. So, he traded in his nuclear reactor pieces for pieces of hand crafted jewelry, confident God was leading him into this new career.

But almost five years to the day of his store opening four masked, armed robbers followed him in the front door on a Saturday morning. Wayne survived, but the new retail owner lost it all. The robbers took $168,000 of his $186,000 total inventory.

Through the kindness of jewelry industry connections Wayne picked himself back up and reopened his store. He continued to take local repair jobs while tapping his creative talent through custom design. One of his most popular pieces, called the Heart Cross, is in such high demand that he has to hire a manufacturer to handle production.

Although he never finished high school, the intelligent, highly talented man enrolled in jewelry school. Three days into the session he was dismissed.

“On day three the instructor dismissed me, saying ‘There’s nothing more I can teach you. You will be successful in this industry,’” recalls Wayne.

So he went back home and did what he does best – create beautiful jewelry.

But this past June he, once again, faced a total loss of inventory. This time it was much worse though. The thieves spent nearly five hours in his store, an unbelievable amount of time considering his store was monitored by a national security company. Repeated alarms went off, but Wayne wasn’t notified for almost eight hours after the first alarm.

“The thieves used a cement saw to cut a hole in my roof around 2:00 a.m.,” said Wayne. “That’s when the security company received the first disruption alarm. There was a second disruption alarm around 2:30 a.m. and, again, I was not notified. These were followed by a power surge notification around 3:30 a.m. – still, no call.”

It wasn’t until 9:30 a.m. that the company called Wayne to inform him about the alarms. Immediately he instructed them to call the police.

With a complete loss of inventory, including his own family heirloom pieces, he’d finally hit a wall.

Done with being robbed.

Done with starting over.

Done with risking it all.

“For three weeks after the second robbery I was extremely discouraged,” a somber Wayne recalls. “I truly thought I couldn’t do it anymore. I told myself I was getting out, and started making plans to sell what was left of my tools. But then I remembered a conversation I’d had with the Lord.” 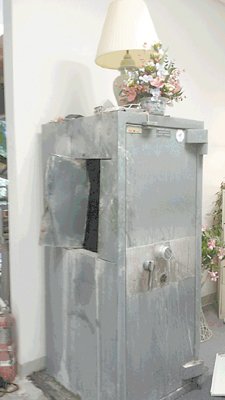 Wayne got down on his knees, asking the Lord what to do, and 30 minutes later his phone rang. A friend called to offer financial assistance to get him back up and running.

With a renewed sense of purpose and some amazing help from his vendors Wayne opened back up in time for Christmas this past year and, to his surprise, sold more this year than last. Since his November 2015 re-opening Wayne has seen unprecedented success.

The man who’d been making hard decisions since he was 12; who’d been married to the same girl for nearly 40 years; who’d left a 25 year welding career to tap into the gift he believed God had given him, had faltered. But it was momentary. He may have questioned his fate but he didn’t give in to fear and discouragement.

“I said after the first robbery that if I made it through that one I could make it through anything. I guess God took that to heart. I get my inspiration from Job in the Bible. He lost everything but never stopped thanking the Lord.”

Today, at the age of 55, Wayne looks back over the many hardships he’s faced with a different perspective. Filtering everything through a spiritual lens gives him peace and the courage to continue doing what he believes God has called him to do – make beautiful jewelry.