Holding history in their hands

West Point Cadet Joseph Simon, and his fellow classmates of 2011, received a tremendous gift this year; 16.44 ounces of donated gold. Worth a little more than $10,000, this gold is special. It’s seen battles and traveled the world with heavy artillery divisions. It’s fought in WWII and the Korean War. It’s commanded the 82nd Airborne Division and received numerous awards including: Distinguished Service Medals, Silver Stars, Legions of Merit, Purple Hearts and the Combat Infantryman’s Badge. 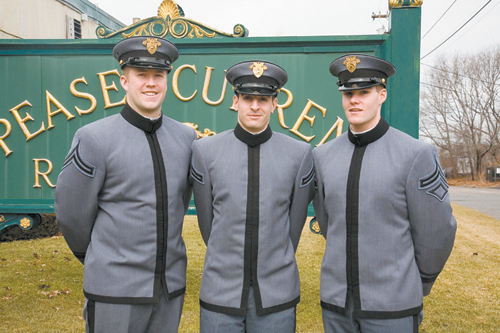 This gold is familiar with the terms lieutenant colonel, brigadier general, major general and grandfather. More than just a means of monetary value, this gold has a history and, once donated, a purpose: being blended into the gold of the class rings created for ’s graduating Class of 2011.

On March 7th, 2010 more than 20 West Point alumni, family and friends gathered at Pease and Curren refinery in to symbolically drop donated class rings into a black crucible for melting. As the biographies of donors were read aloud, the clanking of more than 300 years worth of service to our nation could be heard hitting the bottom of the crucible, waiting its turn to ‘face the fire’ once again. Why do they do it?

“These graduates feel an extremely strong connection to West Point and they desire to maintain that connection by making their rings a tangible part of the lives of the graduates who will take their place in the Long Gray Line at graduation,” states Joel Jebb, director of Class Support for the West Point Association of Graduates and a West Point graduate. “Like the crucible used to melt the donated rings, West Point itself is like a crucible with the intense experiences that cadets have while at forging an unbreakable bond between them and those who follow.”

The wife of one donor attests to the fact that West Point and the Army were such a huge part of their lives that she was not surprised when the date of her husband’s death coincided with the anniversary of the founding of the .

Likewise, Colonel Terry Kirkpatrick, son of Colonel Elmer Kirkpatrick (Class of 1929), donated his father’s ring to the Class of 2011 to commemorate the 50th anniversary of his own West Point Class of 1961, proving the love for this academy spans generations.

For the graduates, the forging of melted gold brings significance, inclusion and reassurance.

“Having the gold from previous classes included in our class rings is significant to the Class of 2011 because it brings the whole spectrum around to us,” comments Cadet Simon. “These men served in WWI, WWII, Vietnam and Korea and, when we’re deployed next year to Iraq or Afghanistan, there will be real comfort in knowing we’re carrying a piece of history that has seen battle before.”

Colonel Peter Foss, Class of 1951 and ring donor to the Class of 2011, certainly saw battle. After serving in the Korean War as a company commander with the 5th Regimental Combat Team he was awarded the Bronze Star Medal and the Combat Infantryman’s Badge. He went on to where he commanded a company in the 505th Airborne Infantry Regiment and was a Battalion Commander with the Americal Division during the Vietnam War.

Likewise Colonel Richard Bauchspies, a 1958 alumni ring donor, served two tours in ; one with the 1st Cavalry Division and the other with the 25th Infantry Division. He was also a part of the 4th Armored Division and the 82nd Airborne Division. His donation was especially emotional as grandson Cadet Brandon Lawrence (Class of 2011), read aloud his grandfather’s biography, acknowledging his grandmother, mother and siblings before dropping his grandfather’s ring into the crucible.

“One month before my grandfather passed away he gave me his ring because this is what he wanted to do with it,” recalls Cadet Lawrence. “It is very special knowing there is alumni gold in my ring, but even more special because it’s my grandfather’s gold.” 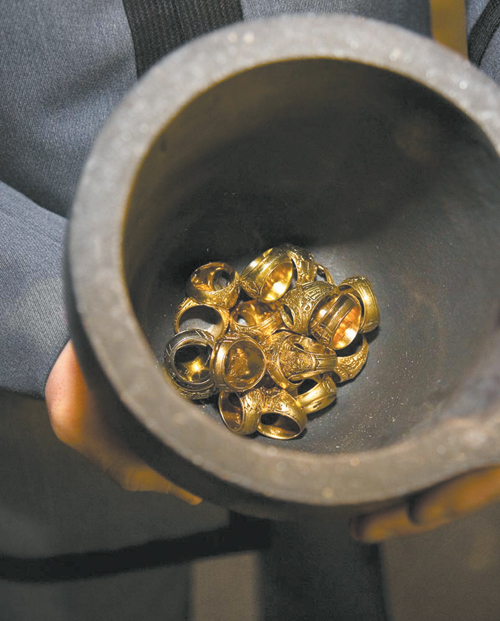 A crucible containing donated West Point class rings to be blended into the gold of the class rings created for West Point’s graduating Class of 2011.

The oldest donor family was that of Colonel Elsworth Kirkpatrick, Jr., Class of 1929. Col. Kirkpatrick served in WWI in the Corps of Engineers as Chief of Staff of the Northwest Service Command in . He went on to command the Japan Construction Agency in until he retired in 1957.

Once melted, the gold ingot was shipped to Balfour’s manufacturing facility in , where it will be added to the gold being used to manufacture rings for the Class of 2011. Kimberly Michalik, president of Pease & Curren, who oversees the actual melting of the donated class rings, is proud to play an integral part in such an amazing tradition stating:

“Pease & Curren feels connected to the emotion and tradition of the West Point Ring Melt. We are a 94 year old company steeped in tradition, so we understand just how important heritage and legacy are, and we happily offer our services, facility and our time, free of charge.”

The West Point Ring Melt, now in its 10th year, has contributed more than 185 rings for donation. For cadets and alumni, this event symbolically bonds multiple generations of graduates together in the form of a class ring.