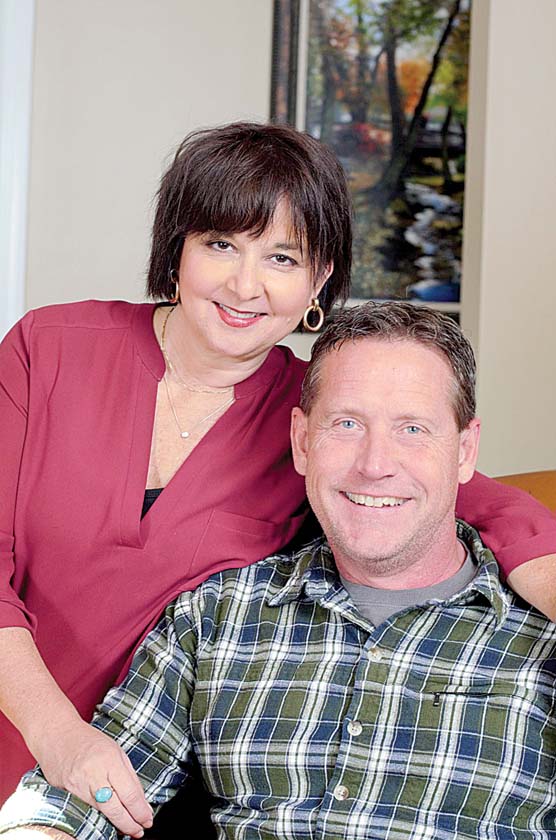 Terry & Rick TillisRick Tillis is a self-taught jeweler who got his start doing trade work for stores three decades ago. Ten years ago, he and his wife, Terry, left their home in Franklin, Tenn., and opened shop in the small town of Lewisburg, 45 minutes south.

“We have lived in Middle Tennessee since the ’80s and visited Marshall County often, canoeing on the Duck River that runs through the county and Henry Horton State Park,” Rick says. “The beauty of the county, real estate prices and the people were too much to resist.”

The timing was interesting as Terry and Rick managed to put down roots and then actually flourish despite the economy, which was still reeling from the 2008 recession when Tillis Jewelry opened its doors.

“Lewisburg had the highest unemployment in the state of Tennessee,” Terry wrote this past January on the Jewelers Helping Jewelers Facebook page. “We outgrew our space in 2 years. Why? We offered a need in the community and provided personal service. Fast forward to me, I am a GIA GG, it took me 6 years and I did it just because I thought it would be interesting. Up until 3 years ago I worked programming telephone systems and helped at the store on weekends. But 3 years ago someone asked my husband to run for State Representative for our district and he won. As a family business it was important for our store to be family run. So I quit my corporate job and started running our store. I never looked back.”

Rick, who serves the State House 92nd District, credits three rules with Tillis Jewelry’s success in unsteady times: “Do quality work, charge a fair price and be nice to people, treat them like family. It’s as simple as that.

“When we opened in June of 2010, Marshall County had a 21 percent unemployment rate – worst economy in my lifetime, and I open a business that sells a luxury item. Best business plan? No. But we stuck to our principles and kept our overhead low and bought inventory as we could buy with cash, no loans. We actually outgrew the space in two years and moved to another building on the square and have been there for eight years.”

Rick, brother of U.S. Sen. Thom Tillis of North Carolina, expects the same sort of success after the COVID-19 pandemic. “Jewelers have been around since Old Testament times, and they will be here until the end. The ability to adapt to consumers’ desires, demands and shopping habits are going to be critical to future success of jewelers. Custom work should be your primary focus of business along with repair work.

“Competing with mass merchandisers of jewelry is a battle that cannot be won by family-owned/mom-and-pops, but we can provide something Amazon and the others cannot. Personal touch, knowledge of product and skills that no van can deliver.” 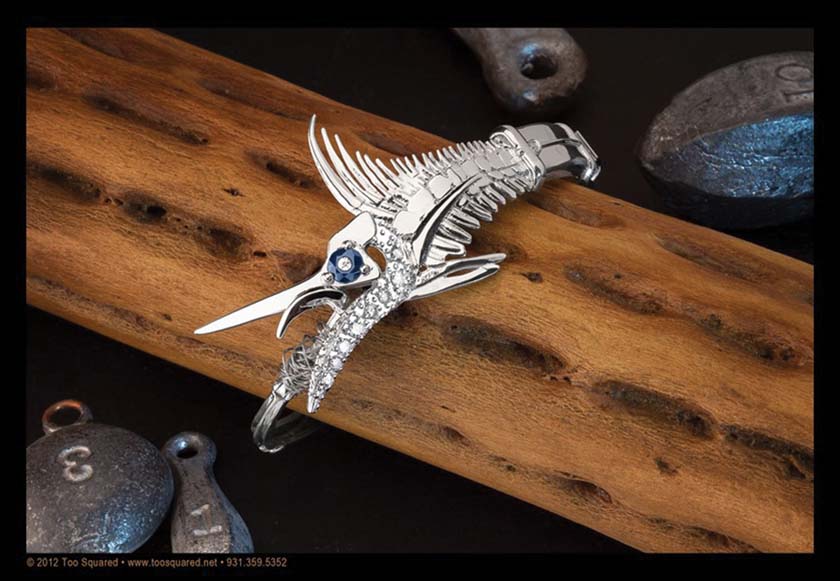 Custom work, such as this blue marlin skeleton bracelet with sapphire eye, accounts for a large portion of Tillis Jewelry’s business.

Tennessee was one of the first states to start opening up after closing for COVID-19, and Rick says business has been great. In just three days of being open after the stay-at-home order was lifted, he says, “The store sold four custom jobs, and our jeweler has fabricated silver bezels for some lapis cabochons we had cut from a customer’s rough piece. We have sold some Mother’s Day gifts from the store stock, too.” 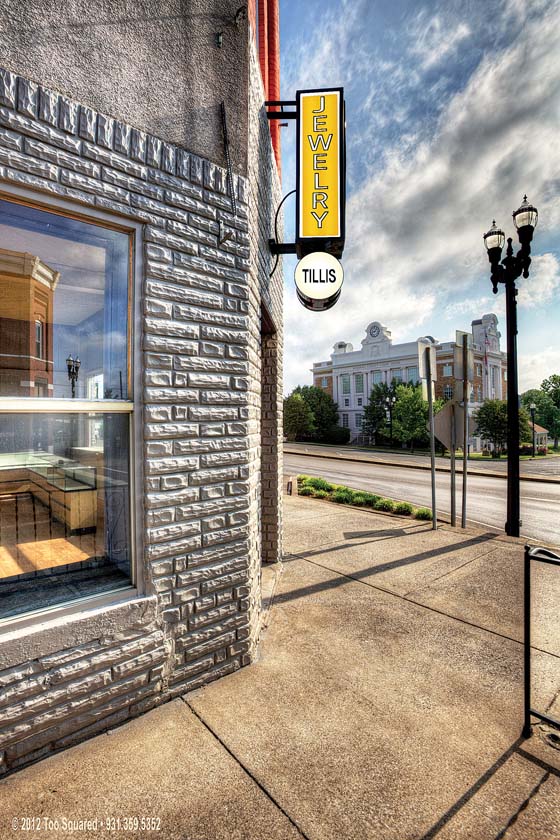 Tillis Jewelry in Lewisburg, Tennessee.Rick was encouraged to go into clock repair by his first wife’s father, a jeweler and watchmaker in Nashville. “After completing the clock portion of the training, I started hanging around the shop – and jewelers – which led to me picking up jewelry repair,” Rick says. “I had a clock repair business, but found jewelry to be more lucrative. I was fortunate to work with some great jewelers at Service Merchandise who saved my tail many times and taught me a lot.”

Rick and Terry met in 1987. “We were both Tae Kwon Do instructors in Memphis at the same school,” Terry says. “We started dating a couple of months after meeting. Rick moved back to Murfreesboro after six months at the school, and I moved there a couple months later after being offered a teaching job there. We married in 1989.”

Off and on, the couple have worked directly together for 10 years. “Sometimes it looks great and sometimes it’s hell!” Rick says. “All in all, it has been a good working relationship. Now that Terry runs the business, it is more profitable, and she has brought organization that I did not have.”

After six years of taking all the classes, Terry became a GIA GG, on July 13, 2018. “Yes, Friday the 13th,” she says. “It was the happiest day. It was a crazy year; I had taken over the store, trying to finish Color Stone Class, the 500 stones, and helping my husband run a campaign. It was pure happiness when I got the email from my instructor.”

Terry has mixed feelings about the corporate world she left behind. “I miss my friends. I had a very stressful job; I designed telephone systems for a major company, and it was long hours. But I have taken what I learned and applied a lot of the principles to our store. I love what I do. I am always trying to figure out how to make us better and how to serve our customers better. I am now enrolled in appraisal classes. I want to learn as much as I can. It just makes me happy seeing that we have created an heirloom for our customers.”

Along with bridal, vintage and watch and jewelry repair, about 35 to 40 percent of Tillis’ business is custom design, which includes both CAD/CAM and hand fabrication. 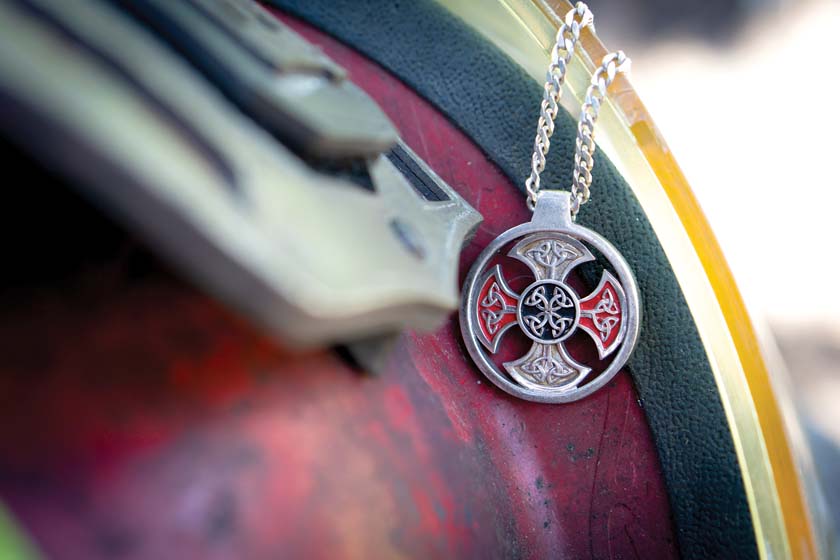 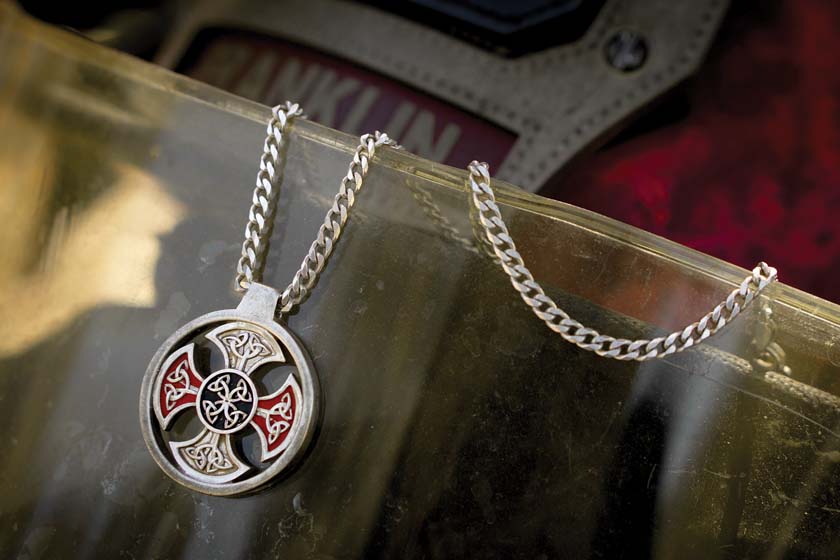 Rick once created a special pendant for local firefighters in Franklin. “I was a firefighter for the City of Columbia for three years and Franklin for 12 years. I always liked the imagery and symbols related to the fire service. I made the pendant and have made a few bangle-type bracelets that look like a fire hose with a fire nozzle on one end and a pick head axe on the other.” The firefighters pendant was a labor of love, he says, “for two of my fellow firefighters who came to our store before we opened and helped me day after day to remodel it. They are true friends. I had their wife and children engraved on the side so they would be closest to their hearts. Theirs were the originals.” 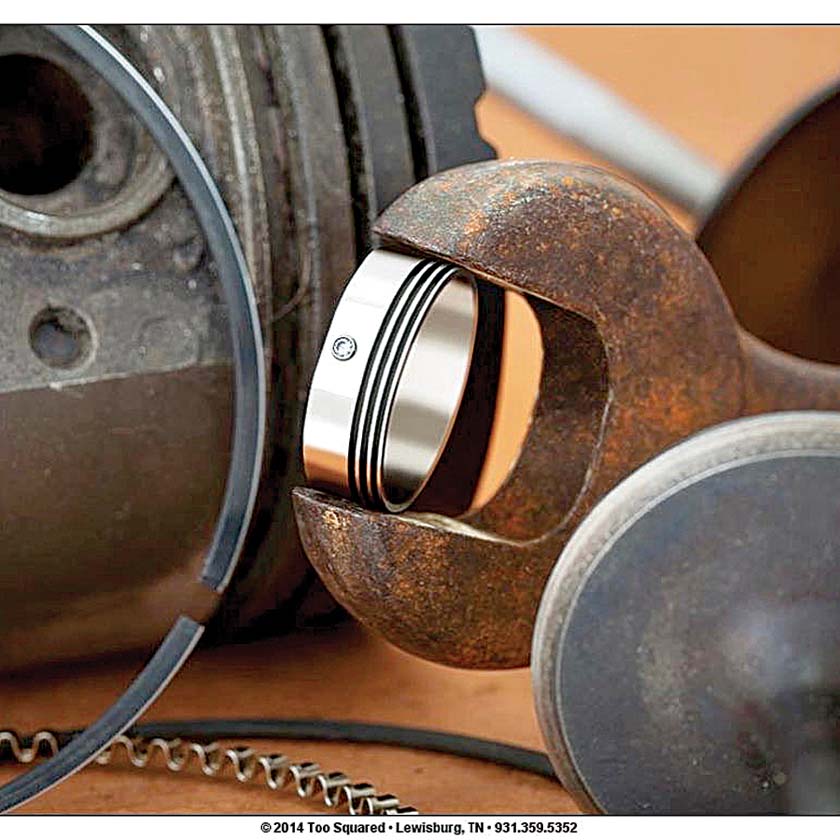 Rick’s love of cars inspired this piston ring, with diamond and aircraft-grade titanium.

Tillis Jewelry is known for its comfortable setting. “Our store is not opulent,” Rick says. “Honestly, some of the stores I see being updated or newly built look like a palace. Our colors are pleasant, we are ourselves as we are out in public, and we dress casual. I wear jeans and a Carhartt shirt embroidered with my name and company logo. I think why our customers love it here is we treat them like family. We do not rush them, and carry on a conversation as long as they like, about whatever is on their mind. Our niche is customer service and custom design. We have had people drive over 100 miles one way for service here based on word-of-mouth reputation.” 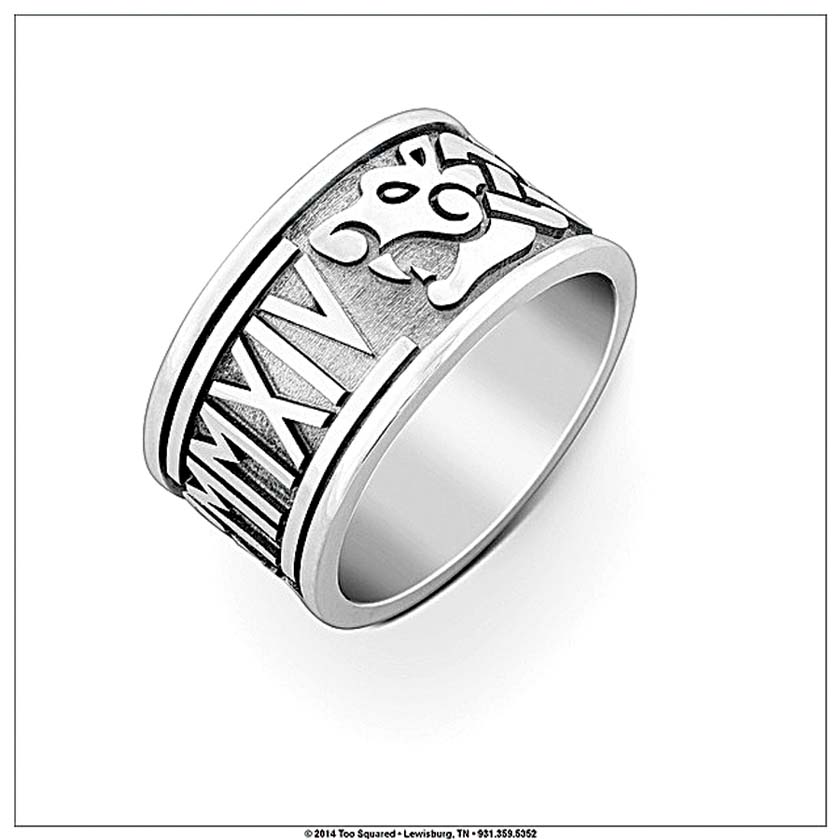 “Our other niche is our antique jewelry,” Terry adds. “We love it. It is history and ties into our custom pieces. Our goal is to make heirloom pieces that last as long as the antique pieces we carry.” 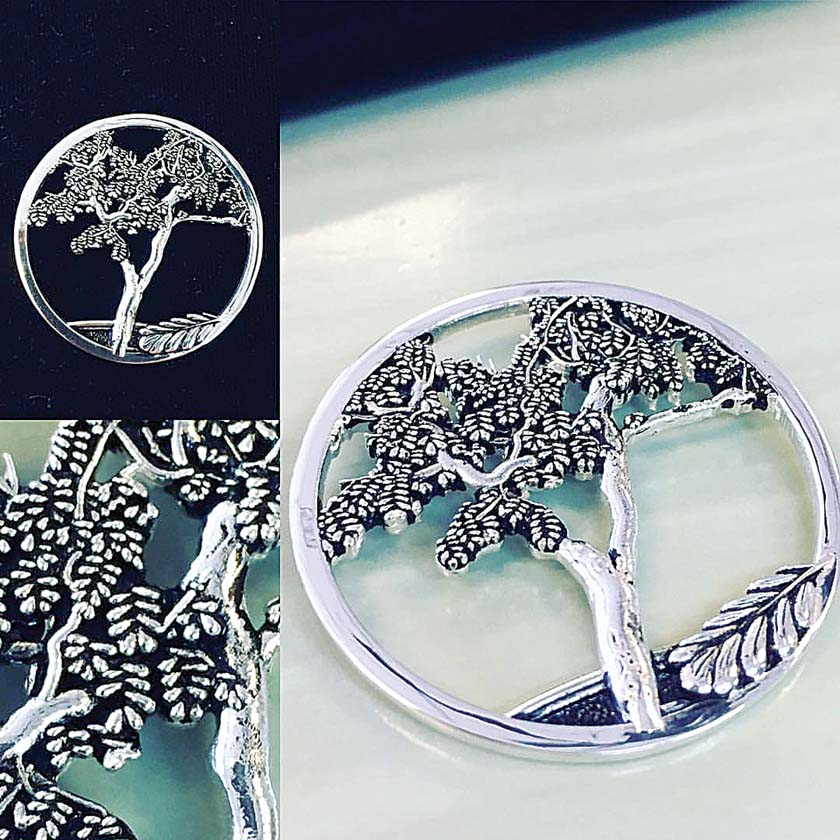 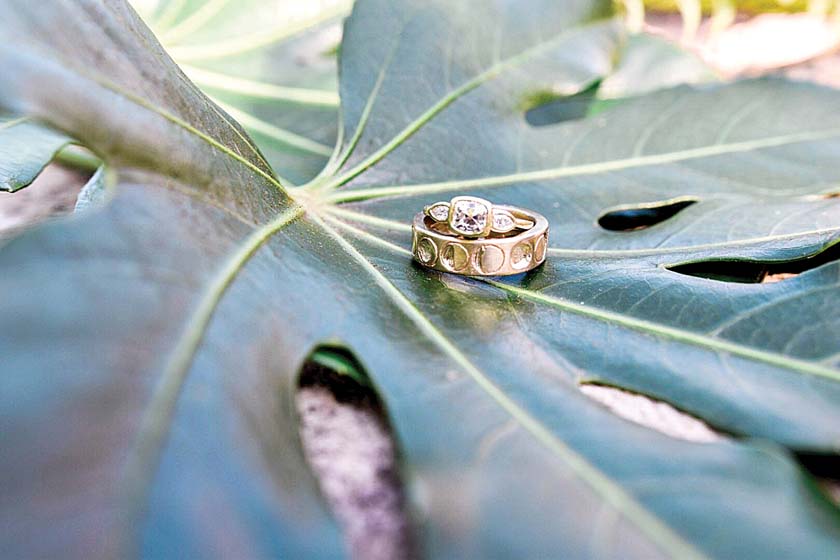 Rick designed this 14-karat engagement ring with old-mine-cut and pear-cut diamonds. The gentleman’s wedding band depicts the phases of the moon. Both pieces are wax carved.

For more information about Tillis Jewelry, call 931-359-8199, visit www.tillisjewelry.com or send an email to tillisjewelry@gmail.com.