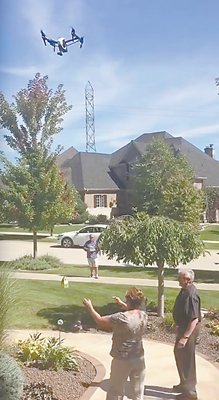 It’s difficult for Main Street retailers to compete with e-tailers like Amazon. But nothing says you can’t take a page out of the online retailer’s playbook. That’s what happened in late September when Tony D’Ortenzio, owner of Distinctive Gold Jewelry, delivered an anniversary gift from his jewelry store to a customer’s home using a manually controlled drone.

A jewelry store owner that enjoys fun almost as much as he appreciates innovation, Tony has always wanted to do drone deliveries from his store. In the early drone phases, however, it seemed a little remote. The possibility of actually doing a drone delivery in his Frankfort, IL market (population 15,000) became more real when Tony contracted David Ho, owner of Aerial Photo of Illinois LLC, to take aerial images of the jeweler’s store.

David has established a solid reputation for creating aerial images of high-end properties with his DGI Inspire, a drone with a built-in high-resolution digital camera. The idea came to him as his wife, a real estate agent, mentioned that some listings get “lost” without a sufficient number of images to review online.

When David took aerial images of Tony’s store last year, Tony couldn’t help but ask about help with a drone delivery. Normally up for just about any aerial photography challenge, David had some initial concerns, topping the list “drone phobia.”

“There have been reports over the last six months that people, especially gathered in large crowds, don’t like to be confronted by a drone,” says David. “And, we’ve all read news stories about people shooting drones out of the sky.”

There was more to David’s drone delivery dilemma than a person’s apprehension. David’s drone is not a GPS coordinate drone. In order to conduct a home delivery of a product from Tony’s store the operator of the drone would have to follow or “chase” the drone using manual controls from inside a moving vehicle.

The battery cycle of the drone is only 15 minutes fully charged. The customer’s home had to be a short distance from Tony’s store. Other considerations such as power lines and heavily wooded neighborhoods would also present flight plan challenges. And, bad weather was another unpredictable factor.

But, the biggest consideration of all was selecting the right customers with a special gift-giving occasion worthy of such an innovative delivery method. Tony asked sales associate Lisa Karlstedt to find the best couple.

“Lisa has a good grasp on our clientele,” says Tony. “She’s been with us a long time and she knows our customers really well. When she selected the couple, I knew they’d be the perfect fit for this idea.”

Wanting to make the drone delivery and the gift a complete surprise, Lisa contacted Bob (not his real name as Tony would like to protect his customers’ identities) last year to determine if he’d be open to the idea of a drone delivery. Bob liked the idea very much, but he wanted to wait for the couple’s fortieth wedding anniversary in September.

The 1.5-mile flight plan was decided on, and the flight time had to be at least half of the 15-minute battery charge. Weather permitting the flight time would be roughly 7 minutes from door to door. The travel time could have been cut down considerably with the drone launched near the customer’s house, “but Tony wanted it to be special for his customers, so the drone delivery had to start at his store’s front door,” says David.

Tony remembers the September day perfectly. “It was a gorgeous early fall day,” Tony says. “There wasn’t a cloud in the sky, there were was little if any wind, and the temperatures were unseasonably mild.”

Bob purchased a gold Concord watch for his wife as a fortieth wedding anniversary gift. Wrapped and ready, the drone picked up the store bag by the handles and took flight. Lisa, Tony and David quickly hopped in a car and the chase ensued.

Notified by text message the drone was on its way, Bob took his wife to their front yard. In a separate video taken by the couple’s son in front of their home, Bob kept hinting something special was soon to arrive. As the drone came into view, the wife, standing on the couple’s front sidewalk, repeatedly asked what it was. When the store delivery was slowly descending, and Bob’s wife reached up to grab it, David shot the drone up then lowered it down again in a playful taunt.

“She was just blown away,” says Tony. “Bob and his wife were part of a very special day that we were very lucky to be a part of, not just with the gift giving on their fortieth anniversary, but for allowing us to be one of the first jewelers perhaps in the country, for sure in the state of Illinois, to conduct a drone delivery.”

For Tony the September drone delivery is the only one he has done so far. David, an FAA (Federal Aviation Administration) licensed drone operator, is willing to work with Tony again on another jewelry delivery. He’s just waiting to hear from Tony on when that might happen.

“We’re really into being Secret Santa,” says Tony. “And, we’d definitely like to use this technology for bridal customers, perhaps an innovative marriage proposal for a young couple. Millennials get this technology and I’m sure would be very open to having some fun with it. When that happens has yet to be determined.”

For now, Tony has received some publicity in his town and throughout the jewelry industry, and his social media websites (namely Facebook and Twitter) exploded in September when drone delivery videos were posted. “The video received more than 1,000 views on Facebook,” says Tony.