Let’s face it, with the introduction of battery-powered timepieces more than 50 years ago, the true art of watch making has become a rare thing. Most modern watchmakers service current or recent production watches. It is becoming increasingly rare to find one who builds mechanical watches from scratch. Edward Wright and his father, “Spyder,” are true horological artisans with a love for all things mechanical. The father/son team enjoys a passion for vintage timepieces, respecting the discipline and talent that went into their construction. But this family also shares another common love – the ocean. 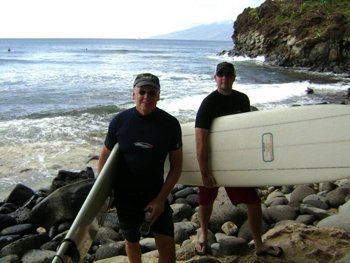 (l-r) Father and son, “Spyder” and Edward Wright share a passion for watch making and surfing.

Ask Spyder Wright which came first, surfing or watch making, and I’m not sure what he’d say. Spyder is a 68 year old internationally acclaimed surfer renowned for producing some of the most sought after surf boards on the planet. He was just 15 years old when his engineer father charged him with taking apart a WWII watch, inventorying the pieces and putting it back together again ensuring it worked.

“After that, I was fascinated,” recalls Spyder. “Every time I got some money I bought an antique watch. Surfing and watches are at different ends of the spectrum, but there are engineering aspects to both.”

In the mid-‘70s Spyder hand crafted his first watch, the DC-3. Modeled after a pilot watch, he used surgical steel for the case, platinum rotors, a waterproof screw down back and 25-jewel movement.

But a decade before he crafted the DC-3, Spyder Wright began crafting surfboards. He discovered a deep passion for surfing in Huntington Beach, California. He took to it like a fish to water, and quickly earned respect and a solid reputation within the surfing community. His uncanny ability to walk back and forth across the longboard earned him the nickname “Spyder” from his California surfing buddies.

With only a few board makers around, Spyder decided to start hand crafting his own. But it wasn’t until he surfed Hawaii and began representing the Duke Kahanamoku Foundation in the mid-‘60s that his surf board business grew. Today, Spyder Wright surf boards are treasured for their craftsmanship and rarity. Although he’s been manufacturing surf boards for more than 45 years, he estimates producing no more than 15,000 boards in total.

Opening surf shops along the East Coast allowed him to venture into upscale apparel which eventually led to hand-made watches, making for an uncommon combination.

Owning multiple businesses hasn’t slowed down Spyder’s surfing, but it has prompted him to sell off several of his lines, including his E.Townsend fine watch boutiques in Palm Beach, FL and Nantucket, MA. His son, Edward Wright III bought both stores in 2003 and, like his father, caught the horology bug in a big way.

“Dad and I come up with designs and have each watch hand-made in Europe,” remarks Edward. “Our inventory is huge, with up to 1100 watches in the store and my dad is a true artist. We share a love for all things vintage and carry many vintage pieces in stock.”

Edward and his dad have amassed an impressive rare vintage collection of watches from the 1920s to the 1960s that include Rolex, Omega, Cartier, Hamilton, Longines and Patek Philippe.

E.Townsend customers appreciate Edward’s ability to discuss the mechanics of a watch. He is known for his appreciation of the finer brands like Franck Muller, Graham, Glycine, Pierre Kunz and Choppard, just to name a few. Edward’s mind is always racing, thinking of new watch designs based on the dashboard or grill of vintage cars.

Spyder’s surfing has garnered many titles including: East coast Champion (1979), finalist in the National Championships in Hawaii in 1980, competition director for the US Surfing Federation as well as nominee into the Surfing Legends Hall of Fame.

But it is his beautiful craftsmanship in watches that keeps people coming back for more.