A jewelry store owner’s pledge to bridal jewelry takes many forms, from a dazzling array of inventory to images, videos and postings to social media and digital marketing platforms. Some jewelers, however, like to take their focus on this product category to another level, to make absolutely certain customers in their market get it. 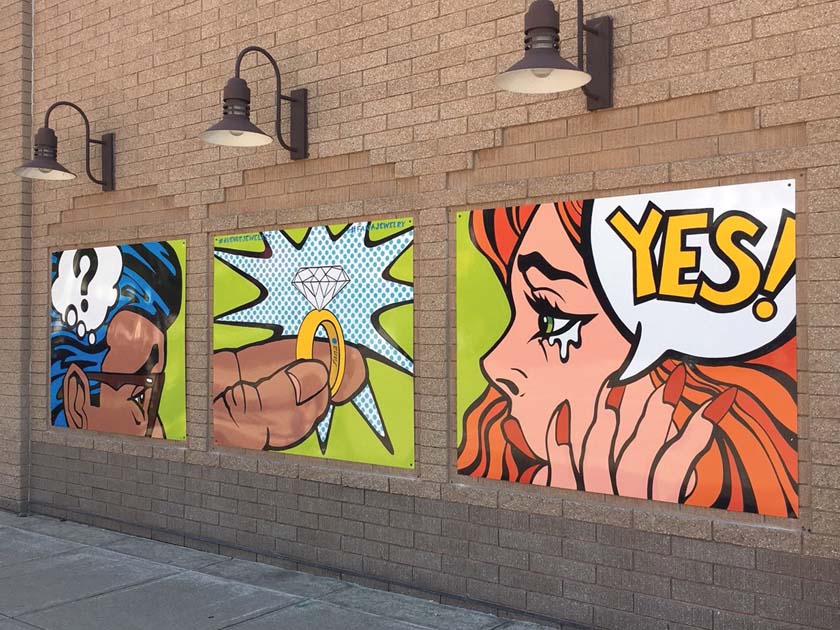 That’s what Jason Druxman, co-owner of Avenue Jewelers in Appleton, Wisconsin did when he decided to create a mural on the outside of his store. It’s not as if the good folks of Appleton didn’t know of Jason’s laser-like focus on bridal. His store’s just engaged themed t-shirts, photo booth images, and selfie-worthy marketing and promotional materials are as affectionately associated with Avenue Jewelers as Jason’s annual Christmas costumes.

But when it comes to messaging – as the marketing mantra goes – keep it simple, keep it consistent and keep it coming.

Jewelry stores have a traditional characteristic that starts with the exterior of a store and makes its way to the showroom and back rooms. But Avenue Jewelers is a little different. For starters, the store is near a local college. Given the bombardment of marketing messages it’s difficult to get young people’s attention. 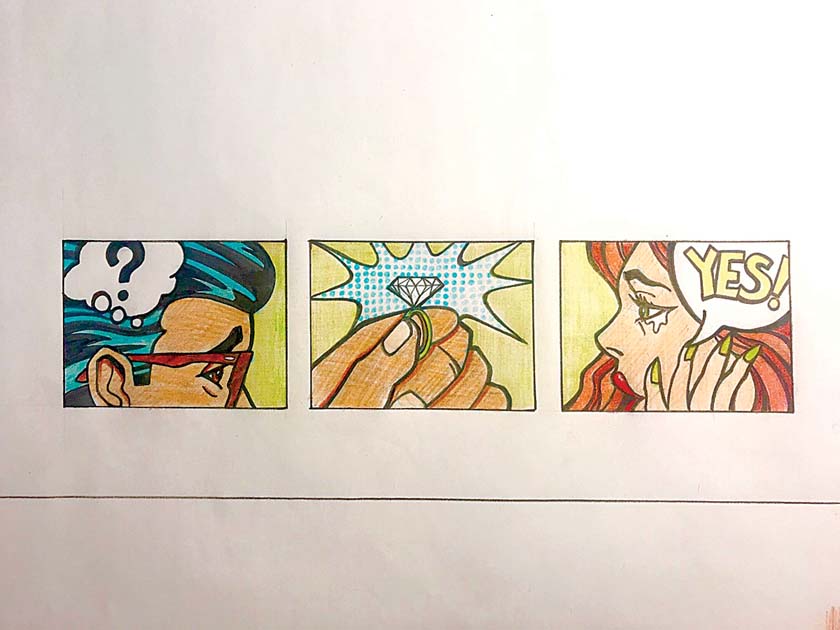 Practice makes perfect – a sketch of one of the mural panels.

And, the jewelry store is located in an active and vibrant downtown retail area. Standing out in some way with positive and engaging messaging is vital to bringing in business. That’s why Jason and his team decided to place the mural on College Avenue, the main drag in town that goes – you guessed it – straight to the college.

Jewelry store owners have tried in many ways to convey their marketing messages to passersby. Murals are rare in retail jewelry but not unheard of. Jason’s decision to commission the mural with well-known local artist Chad Brady was all about the bridal focus, visibility and community engagement.

“We worked with the artist and explained we wanted something that conveyed what we did inside the building and for it to be interactive,” says Jason. “We wanted people to want to have their photo in front of it, similar to the angel wings in Nashville.”

With the basic concept in mind, Jason met with the artist to discuss the logistics of painting the actual mural. Given the store’s porous brick exterior, that blank canvas wasn’t going to work. But, where there is adversity other opportunities present themselves for creative problem solvers. 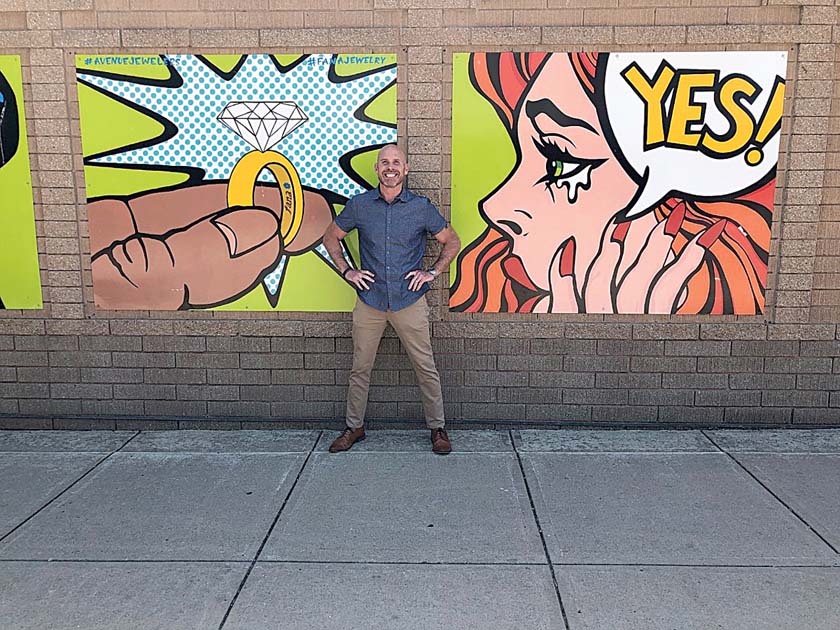 Store co-owner Jason Druxman was thrilled with the results of his mural idea.

The brick exterior of Jason’s store has three large sections where the bricks are recessed by three inches. “This proved to be a perfect fit for a cartoon pop art concept,” says Jason.

Unable to the paint the actual brick, the cartoon panels were made of stainless steel and bolted to the side of the building. Acrylic paints were used and then sealed with several layers of polyurethane clear coat.

Similar to most cartoon pop art, Jason’s mural was painted in bright, attention-getting colors. Like other exterior signage, size is a consideration. And, each of the three cartoon panels measure 5’x 6’, making for a big impact in downtown Appleton.

The concept was born in March last year and made public in August. Since then the mural has been everything Jason and his staff could have hoped for with a larger-than-life mural that functions as a semi-permanent billboard. 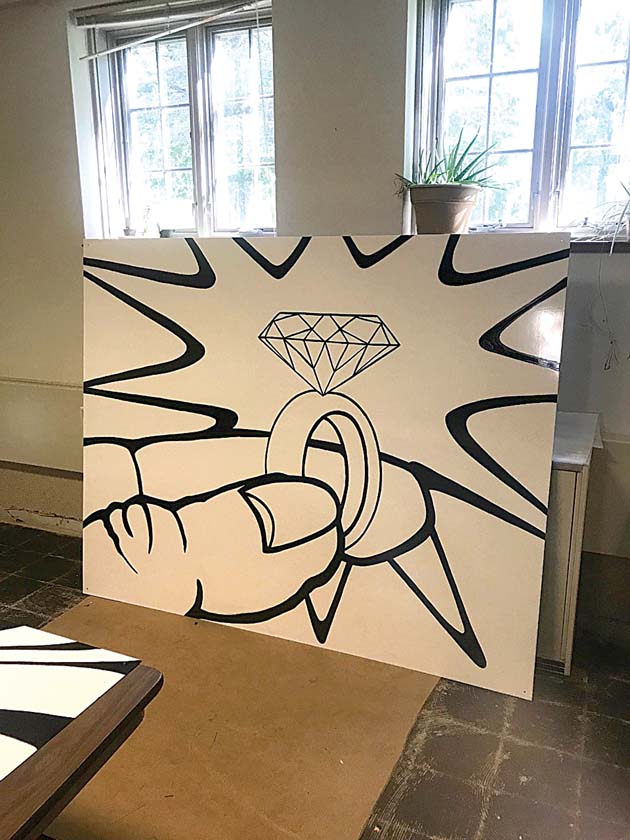 For starters, the artist that worked with Jason has created several murals throughout Appleton. Jason is part of a trending group of small businesses capitalizing on a very urban way of marketing in a small town (Appleton’s population is about 75,000).

More importantly, in the world of modern marketing it’s all about engagement. It’s not just how a customer comes to find and use a product or service, but how they communicate product choices and loyalty to others (family, friends and, of course, influencers) on social media websites.

“From the start, people have taken notice of the mural, starting on the day they were putting it up,” says Jason. “Since then we’ve seen brides and grooms share pictures of themselves on their wedding day in front of the mural, seen groups of young ladies out reenacting the art, and even marriage proposals in front of it.”

Avenue Jewelers has been part of the downtown Appleton retail landscape for 47 years and counting. Shaking things up in the lead up to a milestone anniversary is certainly within the realm of noteworthy projects commemorating the store’s longevity in the market. And, the increased visibility doesn’t hurt.

“The mural is definitely bringing in more and more customers,” says Jason.

In looking ahead, when Jason’s next big idea comes to fruition, the mural panels might find a new purpose, even new owners. “One day I can imagine us donating one or two of the mural panels to a charitable auction,” says Jason. “But for sure one of the panels will be displayed in my home. The artist’s work is absolutely amazing.”