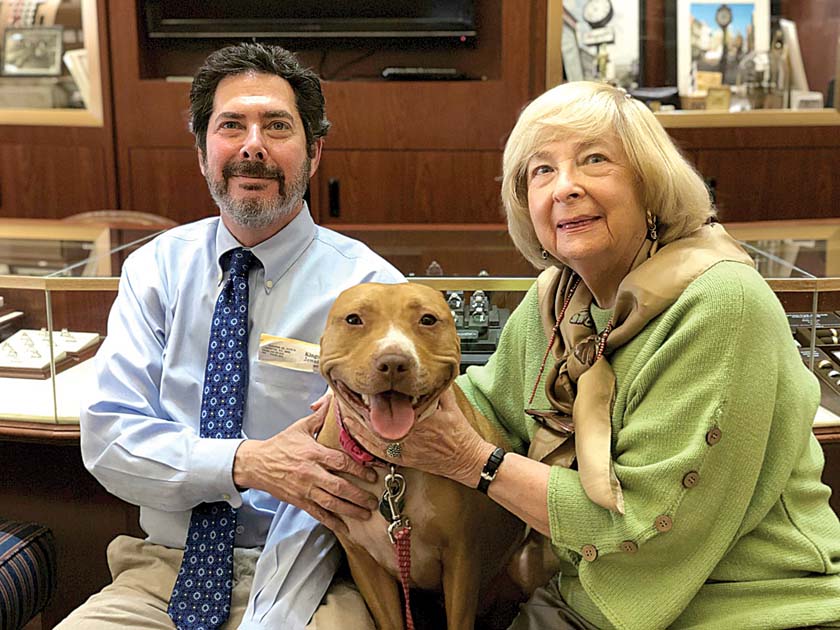 Michael Kingoff with his mother Janice and store mascot Peawee.Michael Kingoff acknowledges he’s no techie – his three-generation family business in coastal Wilmington, N.C. has thrived on personal and invaluable relationships forged with customers and community over the past 101 years. But the COVID-19 pandemic and eight-week closure has prompted him to rethink things a bit.

“One thing this pandemic made me realize is if there is another round or another incident that makes us close for a long time between now and the holidays, people will need to be able to order,” Michael says. “We have a website, but we weren’t using it for e-commerce. When we were working with our web builder, I chose not to include a shopping cart. That was short-sighted.

“But our customers like coming into the store and meeting me and the staff,” some who have been with the store more than 40 years. “They feel comfortable and confident. We don’t want to service them just one time. We want them to know that if you have a jewelry need, you can come see me. That’s where working for a family business is good – we’re able to be warm and fuzzy.”

Michael, a Guild Gemologist of the Diamond Council of America, is one of three boys and the only one who works in the family jewelry business. While his brothers went into law and medicine, Michael studied economics at the University of Georgia. Scheduling his last quarter in college, Michael’s adviser suggested he take a computer class – one that started at 6:50 a.m. 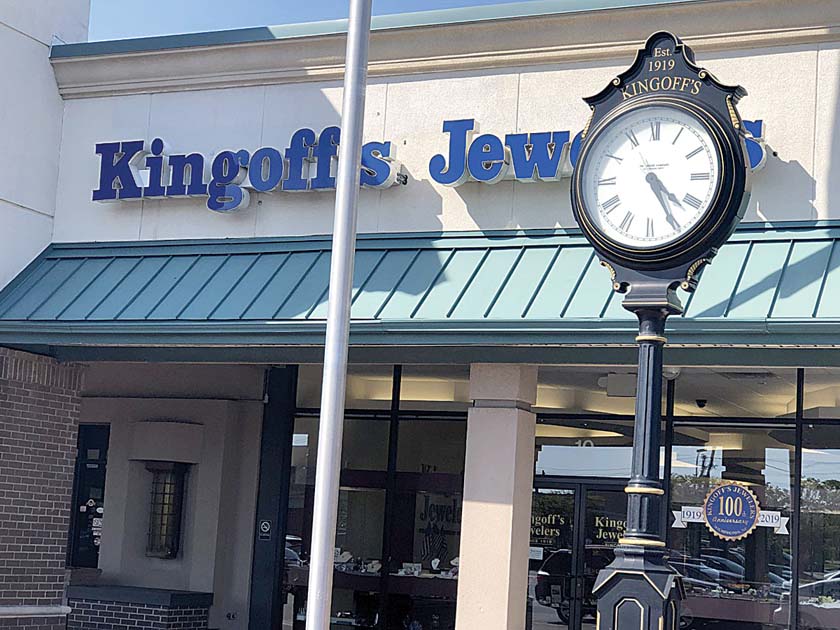 Kingoff’s Jewelers is located in the Hanover Center in midtown Wilmington, NC.

“I said, ‘My senior year? No way! I don’t think those computers will catch on anyway. I’ll take something else,’ ” he laughs. “So I skirted technology even then, but I’m on board now. Yes, I have a cell phone.”

Since Kingoff’s doors have opened back up, sales have been brisk, and
Michael is thankful. His first task in the morning now is wiping down counters and keyboards. Even before reopening, he was busy gathering personal protective equipment such as gloves, masks and hand sanitizer. “With jewelry, you’re always touching stuff that your customers have touched,” he says. “I’ve washed my hands more in the last three months than I have in the last 30 years.

“While we were closed for the pandemic, I missed my customers,” says Michael, who is active in community service and fundraising. “A lot of them are friends. I’d call them to keep in touch, ask what I could do for them. We reopened the Saturday before Mother’s Day, and it was a big day for us – a lot of people came out to support us. My family has been very generous to local charities – my dad always said the community has been good to our family, and we’ve got to give back. It’s important to give back for the right reasons, not to get customers or advertising.”

Michael also credits a pent-up demand for the good business as customers are buying for birthdays and events that happened during the shut-down. “Once that pent-up demand is satisfied, we’ll see what business will be like,” he says. “So many have people lost their jobs, like restaurant workers who rely on tips. But I am the eternal optimist that business will remain brisk and hope we won’t have a second outbreak.”

Michael remembers that long ago, when he was still a “beach kid,” he asked his father: “Dad, what if times get bad and people stop buying jewelry?” His dad answered: “As long as there’s romance, you’ll have a job.”

Michael has worked full-time at Kingoff’s 36 years. He grew up in the store, emptying trash cans and ash trays, and has fond memories of time spent there with his father and grandfather. Ben Kingoff, a Russian immigrant who served in the U.S. Army during World War I, founded the store in 1919.

“I have great memories of sitting on my grandfather’s lap in the store,” Michael says. “He came to the United States as a young child and started a family business that supported four generations. It was the American dream. He was a singer by trade – he sang with a chorus at the Met in New York before moving to Wilmington. He also was a gentleman boxer, making money on the weekends.” 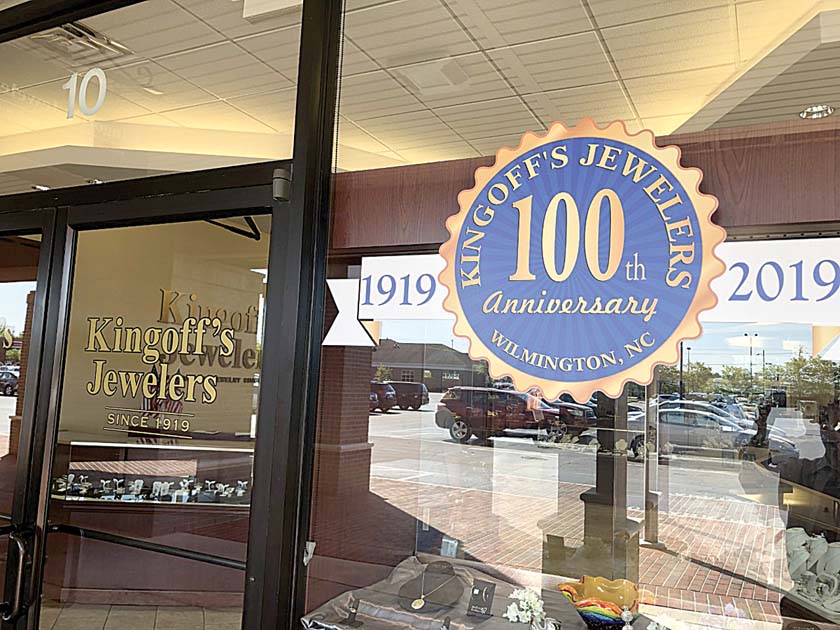 Ben and his brothers fled religious persecution in Russia during the “Fiddler on the Roof” timeframe, when his mother put him on a boat for New York. He and his five surviving brothers at one time operated 40 Kingoff’s stores in the South, but the Wilmington store is the last one remaining. Ben died in 1968.

Michael’s father, William Kingoff, worked full-time within the same four walls on Front Street for 60 years until his death in 2006. He was instrumental in civil-rights advancements in Wilmington and was president of the Downtown Wilmington Association and the Wilmington Merchants Association. Wilmington Downtown Inc. presents an annual achievement award named for him.

“My father was instrumental in getting Wilmington’s restaurants to integrate,” says Michael. “He went around and asked restaurant owners to start serving the black community. A lot of people wanted to voice their grievances, but he was successful.”

Michael’s mother, Janice Kingoff, who started working at the store in 1958 in silver estate appraisals and fine giftware, is a community activist for local charities, organizations and foundations. A 1977 graduate of the University of North Carolina Wilmington, she was named UNCW Alumni of the Year in 1997 and still works at the store.

“My mother was instrumental in getting hotels integrated,” Michael says. “When the State Education Convention needed housing in local hotels, she used me as an infant in her arms when she went to talk to the hotels, so I guess I was part of that! She too was successful – they allowed two rooms in each hotel, which was a start.

“I’m proud of my parents for that. Also, Kingoff’s was the first store in Wilmington to offer credit to the black community. Many elderly gentlemen will come to the store still and say, ‘Your dad was the first to give me credit.’ It makes me proud. Being a minority, being Jewish, it was the right thing to do, and I’m so proud that my parents are known as civil rights activists within our community. You can’t put a price on that.”

Kingoff’s – offering major designer lines along with expert custom work and repair – remained in downtown Wilmington 90 years before moving five minutes away, to the Hanover Center in midtown, 10 years ago. It’s the kind of store where a customer feels at home – particularly those who happen to be dog people. Michael’s 3-year-old pit bull named Peawee is the store mascot, Michael’s “pride and joy.” 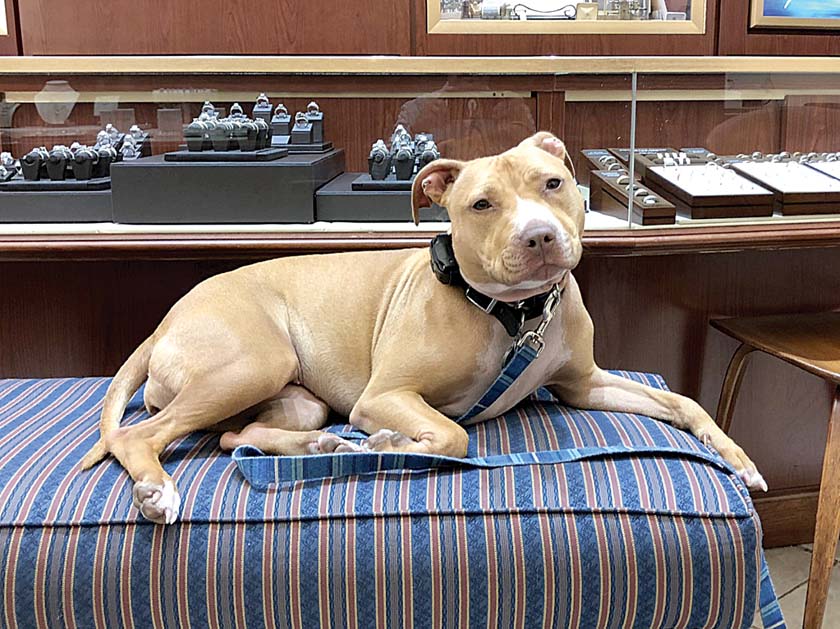 Peawee, Kingoff’s pit bull mascot, is popular with both customers and staff.“There’s no way my father and grandfather would have had a dog in the store,” he laughs. “And my mother wasn’t sure about having a pit bull in the store, but she warmed up just fine. She’s a beautiful thing. Some of our customers wouldn’t even pick up an order unless they know Peawee is here. She comes in two to three days a week, and during the holidays she gets more gifts than we do!”

Michael has high hopes for future success, adding that the trade shows have been and will continue to be important to the industry. “My buying group, the Continental Buying Group out of Florida, is trying to get something in the works for Orlando in October. Precautions (for COVID-19) need to be taken, but the trade shows are an important part of the business, with the camaraderie and just listening to people.”

Retail is not easy, Michael adds. “You have to have a passion for it. But it’s a labor of love being in the family business. I enjoy doing what I do, working with the public.”

For more information about Kingoff’s Jewelers, you can call 910-762-5219, visit www.kingoffs.com or send an email to michael@kingoffs.com.