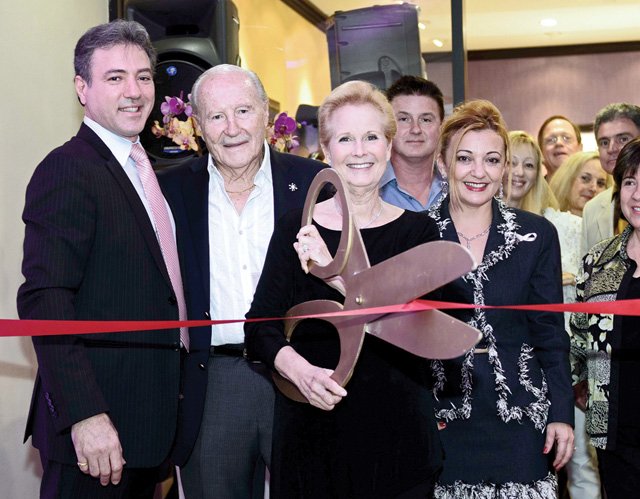 Sal Praschnik Jewelers of Miami is celebrating its golden anniversary in style, with Sal holding steady at the helm and loving every minute of it at the age of 87.

Just days out of knee replacement surgery in April, Sal is literally a walking tribute to the grit and elegance of times gone by, granting an interview from his hospital bed. “Pardon me for a moment,” he says softly. “The nurse is giving me an IV.”

Sal was all for the surgery as he has no plans to retreat from working five days a week at the business he loves – even though he prefers the higher style of days past when men and women dressed and adorned themselves to the nines. The jewelry industry, perhaps more than most, has felt the pinch of changing times as younger generations have adopted more casual lifestyles. Still, the store that’s known for its original nature-themed and classically bold designs remains one of the industry’s leading jewelry companies.

Sal was born and raised in Cuba in the 1930s and ’40s, drawn in to the jewelry world at age 16 when an uncle invited him to apprentice in a diamond factory run by war refugees who had worked in the diamond business in Israel and Antwerp, Belgium. Those refugees, Sal says, opened 30 factories in Cuba, employing about 3,000 people. Sal’s uncle was a partner in one of those factories.

“I started working for $9.29 a week,” Sal says. “My mother and father were very much against it; they thought it would be difficult and I wouldn’t be able to continue going to high school. But I convinced them I would go to school at night, and that’s how I started.”

Sal had worked in the factory 2½ years when the diamond factories returned to Antwerp and Israel. Soon after, Sal’s father suddenly passed away, and Sal’s sisters and mother decided they wanted to be together in New York City. Sal made the arrangements, attaining visas for the family.

“When I got to New York, I looked for a job in the diamond industry,” Sal says. “My sister Bertha was going out with a platinum jewelry manufacturer (Morris Rotkel), and he was trying to get me a job in the diamond industry. But then came the Korean War, and I was drafted into the Marines. My sister married Morris. When I was in the Marines, my sister wrote to me that her husband could use someone like me. When I got my discharge, the following day I started to work for my brother-in-law.”

In Morris’ high-end platinum jewelry factory, Sal started out by sweeping the floor and performing other small jobs. In the 18 years Sal worked there, he learned on the job and developed a passion for jewelry manufacturing and design.

Eighteen years after joining Morris’ business, Sal visited Miami, fell in love with the city – especially the climate – and decided to stay. In 1968 he established a small downtown business that grew into a large one that at one time employed 30 people. “Coming to Miami was the smartest decision of my life,” Sal says. “It is paradise.”

Sal later welcomed his son David into the business, along with his daughter-in-law Virginia, the company’s award-winning designer. “Virginia is one of the most talented people,” Sal says. “She’s fantastic; she has a certain style.”

Over the years, Sal Praschnik Jewelers has created pieces for U.S. presidents, royalty, foreign dignitaries, professional athletes and movie stars. Among these was George H.W. Bush. When the former president turned 80, David presented him with cufflinks designed and manufactured by Sal Praschnik Jewelers. Bush made a swap, giving the cuff links he was wearing to David.

Employees who have worked for Sal include some of the finest jewelers in the world from companies like David Webb, Winston, Cartier, Van Cleef and Tiffany.

“Today, it’s not as appreciated as it used to be; now everything is so casual. In the old movies you’d see women wearing heavy diamond bracelets, necklaces . . . people used to wear them often. I wish we could go back to the days of elegance, but you can’t change the way we’re living, with people buying things online. But when a woman wants to wear a nice item, she needs to see how it looks on, she wants to feel it. That’s my opinion. The style of living today, I wish I could change more things. Women always wore nice dresses; men always wore a suit and tie. When I’d go see a customer I’d be in a nice suit and tie, and handkerchief. That’s the way jewelry should be presented.”

Sal says he’s thankful to have reached the 50-year milestone. “I have made 3,500 different pieces in my life, and I’m so proud of the things I’ve done. Waking up every morning to come to work still feels like a joy rather than a job, and creating beautiful things in the company of my family and my team is my dream come true. Looking to the future, I still believe that as long as there is appreciation for elegance, there will always be a need for jewelry.”

Sal’s thankful for the recent knee surgery, as well. “I want to keep on dancing,” he laughs. “This is my life.”

From nursing to jewelry, a Wisconsin retailer’s career conversion