by Paul Holewa
Share on FacebookShare on Twitter
Reading Time: 10 minutesWhen Smyth Jewelers launched its “How Big Is Big?” campaign in 2014, the Maryland-based (3 stores: Baltimore, Timonium and Annapolis) retail jeweler’s CEO Mark Motes never imagined that the enduring rhetorical marketing query would have a single, quantitative answer just over a year later: 17 feet by 14 feet.

These are the measurements of the world’s largest engagement ring in front of Smyth Jewelers’ Timonium store. At 17 feet tall and 14 feet wide, the giant stainless steel ring is just as much sculpted art as it is a symbol of couples’ enduring love and the store’s long-term commitment to serving them.

A little less than two years ago Allan was commuting to Smyth’s Timonium store on York Road. As part of Maryland’s famed Route 45, a busy and vital artery serving tens of thousands of motorists each day, Allan wanted Smyth’s iconic building to stand out to motorists. In the spirit of the jewelry store’s “How Big Is Big?” campaign, Allan asked himself an unusual question.

“Jewelry is so special,” says Allan. “It’s like the cherry on the sundae of life. Wouldn’t it be great if the store had its own piece of jewelry?”

The answer soon came with the creation of the world’s largest engagement ring sculpture. As the Chinese proverb goes, every monumental journey begins with a single step. The first step in determining the plausibility of Allan’s big ring idea was layering a solitaire ring image to a digital image of the Timonium store. After enlarging the ring proportionally to the dimensions of the store, a final mock-up was prepared.

One important but nagging detail in the initial phases of the big ring project was how the ring would be positioned in relation to the storefront. The large ring posted straight up and down would look too symmetrical. To add visual interest to the big ring, and to give it more of a sculptural, artistic appeal, Allan and his team decided to slightly lean the top portion of the big ring towards the store’s commanding façade.

“We created some mock-ups to show Mark,” says Allan. “He was immediately on board with the idea.”

As Allan soon discovered, taking this ambitious project from concept to creation would be one of his advertising career’s most challenging undertakings. As the creative force leading TBC, Allan has accumulated many skills and experiences that have made his agency an award-winning firm. But nothing prepared him for the excruciating details he’d have to consider along the way from the oxidation and polishing finish of stainless steel to the refractive qualities and weights of various clear acrylic materials. Add in building codes and oversized transportation requirements, and it’s a wonder the big ring project took only about 18 months to complete. 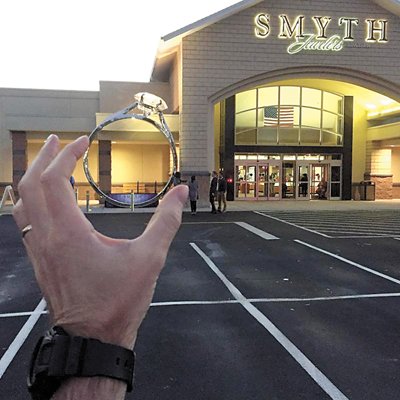 “The world’s largest ring project for Smyth’s was one of the most ambitious projects I’ve taken on in my many years in advertising,” says Allan. “I thought I had a good idea of what would be involved, but you never know until you’re in it.”

Creating the ring was the first and most obvious start. What white industrial metal looks most like white gold or platinum? Stainless steel. Easy enough. In terms of creating it, Allan and his team performed their due diligence and found Ben Blaney of A.R.T. Research, of Lancaster, PA. Ben discussed the pros and cons of making molds to cast the ring versus fabricating the ring from a steel skeletal frame.

Stress factors and the malleable nature of stainless steel sheets also dictated the size of the ring. Once the skeleton was assembled, then came welding sheets of half-inch curved stainless steel on to the frame. When that portion was done, the next arduous task was making industrial looking stainless steel look like high polished precious metal.

“It took a team of four men, working full time for three weeks to polish the steel,” says Mark Motes. “The amount of effort in these sorts of details makes me incredibly proud this is a permanent structure for our Timonium store.”

With the ring portion of the sculpture sorted, next came the diamond. “At first we thought we could make the diamond out of stainless steel, making it more artistic,” says Allan. “But that idea was quickly shot down as the ring would lose its literal interpretation as a piece of jewelry that symbolizes love.”

Poured glass was another idea, but the resulting solid glass mass was estimated to weigh roughly 10 tons and cost several million dollars to produce. Constructing what would be the diamond portion of the big solitaire ring out of clear acrylic sheets was the next phase.

Small-scale models were created then suspended near the top of the actual big ring. After much deliberation about equipping the acrylic diamond with lighting, a removable top portion for routine maintenance, and ventilating holes, it was decided half-inch thick clear acrylic was the way to go. Like a master diamond cutter, sheets and angular cuts of acrylic were artfully constructed to create an acrylic diamond measuring 5 feet by 3 feet.

“The gemological experts at Smyth Jewelers estimated that if the acrylic diamond were real, based on its proportions, it would weigh roughly 13 million carats,” says Allan.

Last but certainly not least of the final details was transporting the now 1.5-ton stainless steel ring with a 5.5-ton base from Lancaster, PA to the Timonium store. Large capacity trucks and oversized load and police escorts had to be arranged as part of the transportation. In preparing for the installation of the large ring, Allan consulted with geo-technical engineering experts to determine the strength of the earth portion of the ring sculpture’s foundation.

“Together with earth and concrete, the base of the ring sculpture weighs approximately 7 tons,” says Allan. Large cranes were brought in to position the big ring’s two extruding posts at its base into the huge concrete and earth footing. During non-working hours, the big ring was covered with a large fabric veil. 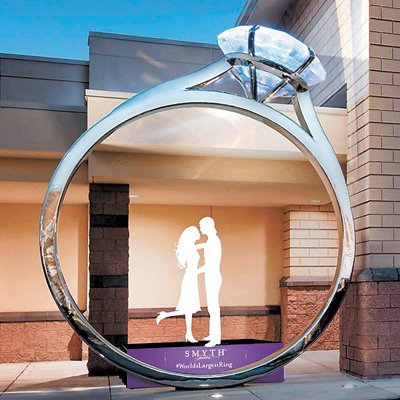 After 18 months of work, the ring was ready for its unveiling on October 15 last year. “We wanted to time the unveiling for the fourth quarter of 2015,” says Mark. “What an incredible start to a holiday season.”

The big ring’s unveiling was a huge media event. One local TV news station’s helicopter hovered over the Timonium store site for 45 minutes waiting for the big moment. A large stage was built just behind the ring for the unveiling event, picture taking, and “Rock the Ring” musical events planned for this summer.

The world’s largest engagement ring is not only part of the Timonium store’s permanent architectural landscape, it has made an indelible imprint on all marketing and promotional materials, from digital to print. “It was prominently displayed in our 2015 holiday catalog,” says Mark.

Allan and his creative team have created many social media programs to generate excitement about the big ring. People can shoot and post a selfie with the giant ring on Smyth Jewelers’ dedicated Facebook, Instagram and Twitter pages for 10 percent off a couple’s wedding bands.

And, what record-breaking big ring wouldn’t be complete without its own hashtag, #Worlds-LargestRing.