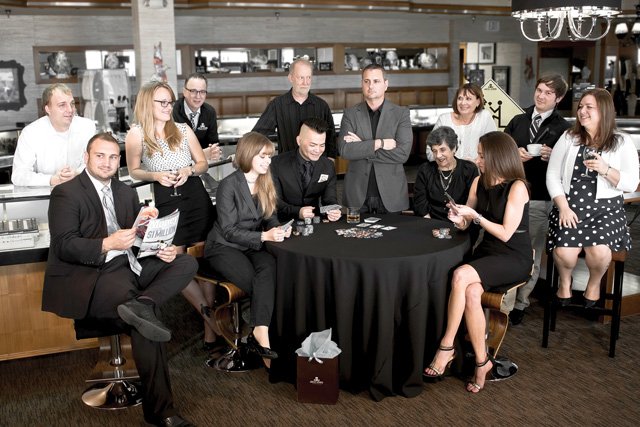 For John Carter, president and CEO of Jack Lewis Jewelers in Bloomington, IL, it’s all about the voice in being the spokesman of his store. “Your voice could be a killer,” says John. “Voice is the most essential quality in being your business’s own spokesman.”

Being the voice of Jack Lewis Jewelers was John’s destiny. At 16, John was hired to do light maintenance and mail room tasks for the store. The year was 1992, a pivotal time for the jewelry store that was opened in 1927 by Jack Lewis. His first job as a teenager, John began working at the jewelry store when Lewis, then president and CEO, John Wohlwend,, and future owner, Carter, all were working there at the same time. 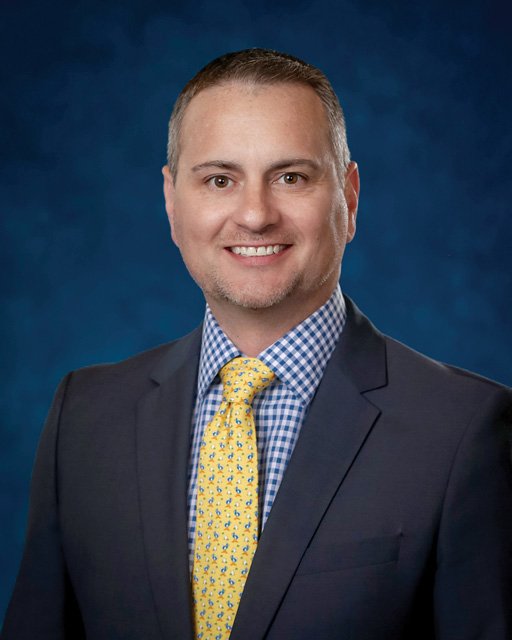 John Carter, president and CEO of Jack Lewis Jewelers.John’s fortuitous timing in the early 1990s allowed him to connect with the store’s founding principles as well as its transitional leadership that changed the business from a post-war watchmaker and hand-engraver to a high-end luxury jeweler. That connection with the store’s past and pivotal transformation gave Carter historical perspective of the business and a vision for its future.

After college and then working on the road for Swiss watchmaker Maurice Lacroix for five years, John returned to Jack Lewis Fine Jewelry as a vested partner with Wohlwend, inking a multi-year buy-out plan that Carter completed in March 2011.

“That’s when I had full autonomy of the store,” says John Carter.

John made some fundamental changes, starting with a store name change from Jack Lewis Fine Jewelry to Jack Lewis Jewelers. Equally important, was changing the business from a “fine jewelry anniversary” store to a diamond engagement ring destination.

But John’s biggest task that would shape his message and messaging platforms as his store’s own spokesman was making a very traditional fine jewelry store more approachable for couples and customers of all budgets (chiefly millennials), while appealing to broader customer demographics with a marketing mantra that conveys the significance of every jewelry purchase.

To do this John hired Josh, a local marketing professional. “Josh sat me down at the outset and asked me what I wanted our store to be, and what central message would convey that,” says John. “After considerable thought, the emotion behind every jewelry purchase was central not to just our store but every jewelry retailer. What was uniquely our ‘emotion message’ was creating and standing behind the new tagline of ‘we know what this means’.”

After a major renovation to the store showroom in 2011, John began the task of getting the new message out to his market. Humor, just plain silliness and raw video diaries are staples for today’s videos, but the unveiling of the “emotion behind the purchase” video in 2011 was more straight talking from John about the store’s new direction with a new message. 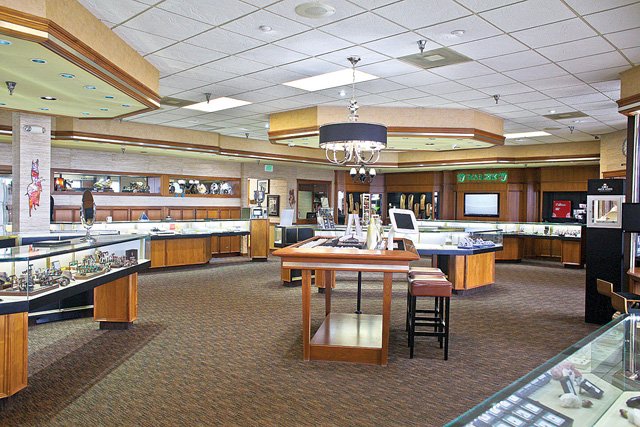 The showroom at Jack Lewis Jewelers.

The one-minute video is filled with what many jewelry store owners would rightly consider brutally honest messaging. From “if Jack Lewis Jewelers only sold engagement rings to rich people, we’d be out of business quick,” to “size doesn’t matter, she matters,” Josh and John crafted a marketing message that made it abundantly clear the old-school luxury jewelry retailer had left the building.

“When you’re young and starting out you don’t have a lot of money. My wife and I didn’t and not many people do,” says John. “In this business we know what this purchase means, no matter if it’s $300 or $3,000. The message is clear for us and our audience, focus on what matters, she matters.”

The essential messaging of the video was clear. John and Josh, however, wanted other essential points to be received, most importantly, that people sensed the inherent authenticity and connectedness to the community in every marketing and promotional touch point.

“My retailer friends ask me all the time if there’s another Josh out there,” says John. “Josh is excellent at what he does but he knows this community very well. That’s just as, or perhaps even more, important to our success.”

Tailoring his message to the community has been an essential part of being the spokesman of his own business. After hundreds of videos, John and his staff have successfully changed the perception of their store, a feat John considers his biggest accomplishment in being his store’s spokesman. This was quite an achievement, considering they had more than 80 years of being known as the local high-end jeweler.

Adept at weaving humor into his messages, from public speaking to his business spokesman work, part of the image turnaround is just being himself, and his staff being themselves as well. Social media for John isn’t just the new media thing. With self-produced video the dominant content, John and his staff have total control of the mainly video messaging posted on Facebook and YouTube.

John may be the person and personality most associated with his store, but all of his staff have roles in promoting the store. A recent Valentine’s Day video with staff talking about what they love most about their partners and the gifts they intended on giving them is one of several examples. Even in these videos, it’s always about knowing what the gift means, how much the loved one matters, and, of course, irreverence and humor.

Video logs are also ubiquitous – on Facebook and YouTube – for Jack Lewis Jewelers. Sales associate Ashley Burton is perhaps the most vocal and visible in these homespun “Good Talk” videos. Ashley has a girl next-door demeanor, attractiveness and personality about her that oozes authenticity and charm. 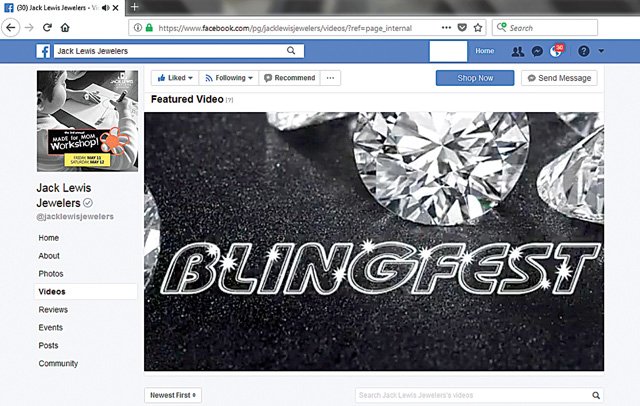 Thanks to videos posted to social media websites, everyone in Bloomington, IL knows BlingFest.

She has done so many “Good Talk” videos they are numbered by season and episode to categorize them all. Ashley often channels sitcom The Office style selfie videos when talking about the day ahead or subject at hand.

One of the first in the series was discomfort and anxiety about wearing earrings and “sticking precious metal through” her earlobes. She got over the nervousness by putting on a pair of Roberto Coin white gold and diamond hoop earrings at the start of her 12-hour shift. It’s an informal and fun way to convey messages and information about the store, its staff, while showcasing product with still images of product and Ashley.

“I remember I was at the bank and a woman recognized me and asked if Ashley was like her videos in real life,” says John. “I want them to have a role in this and be able to do it when I’m not around.”

John has also turned his customers into brand ambassadors. The store has several ring boxes equipped with video cameras, which have created a large number of homemade videos of couples showing exactly what their jewelry from Jack Lewis Jewelers means and what “she matters” is all about, in unfiltered and genuine footage that’s the real deal. Again, it’s that authenticity John seeks to convey.

In looking back at his seven years of being his store’s spokesman the store’s BlingFest videos are perhaps the event and video messaging that has made the most memorable impact in his market. The funniest spokesman moment was a lengthier than normal video entitled carpool karaoke featuring Illinois State basketball players Paris Lee and Tony Wills and their coach Dan Muller. 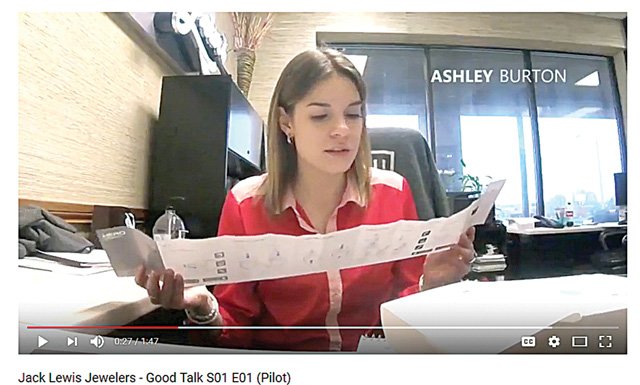 But what John enjoys most about being his store’s own spokesman is, “Being asked to speak or emcee charity events,” says John. “It feels good and it’s good for my business. And, of course being silly and asking our customers to join in on the fun.”