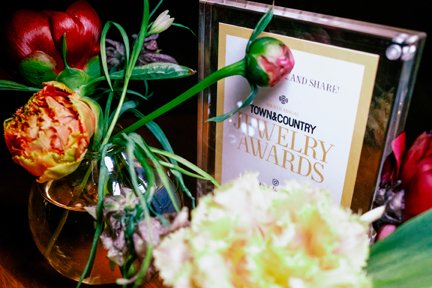 Town & Country celebrated their 2022 Jewelry Awards on May 18. The fourth annual gathering was hosted by Stellene Volandes, editor in chief of Town & Country and took place at Fasano Restaurant. The event was presented by Beekman New York.

The annual awards mark the year in jewels, drawing from both pop culture and events which showcase the current state of the jewelry industry and how it’s reflected in society. Throughout history, jewelry created after a period of crisis has been marked by bold irreverence. In this iteration, T&C considers the need for escape and fantasy in our chaotic world. They single out the work of some of the jewelers who brought a dose of the fantastical into our lives when we needed it and salute the bold creativity that often comes out of cultural shock.

The Year’s Jewels of Pop Culture

Certain jewels define a character. Think of Carrie Bradshaw’s nameplate necklace, a symbol of individualism on the original Sex and the City and, 17 years later, on its HBO Max follow-up. Or Bridgerton’s sparkling embrace of Georgian-era ladies’ love of matching sets. Of course jewelry can signify darker moods, too (see: that pearl gobbling scene from Spencer). And it often captures the imagination in real life: Rihanna bedecked in vintage Chanel and a Christian Lacroix cross for her pregnancy reveal is a moment for the ages.

The Move of the Year – Jewelry for Men

Boucheron’s single biggest commission in its 164-year history was ordered in 1928 – and it was for a man. The Maharaja of Patiala, Sir Bhupinder Singh, presented the maison with thousands of gems and asked for 149 pieces. Indian princes were voracious for jewelry, and they made no distinction between options for men and women. Today’s leading patrons are royalty, too: princes of pop culture. And they also don’t care much for traditional gender norms. Jewels are de rigueur once more to a man’s black-tie wardrobe. Consider these A-list examples: Pete Davidson paying tribute to his late father in a garnet-studded Fred Leighton necklace at the 2021 Met Gala; Jonah Hill in vintage Leighton aquamarines, pearls, and flower brooches at the premiere of Don’t Look Up; and the trinity of Daniel Kaluuya, his exquisite Cartier rivière, and his Oscar for Judas and the Black Messiah.

The Diamonds of the Year

Named for their resemblance to a river of gems, diamond rivières have long attracted an enthusiastic fan base. Queen Mary, for one, was rarely seen without her diamond “turtleneck,” layering chokers and pearls with her 100-carat rivière, which was later inherited by Princess Margaret. To-day, donning a single strand is just as strong a statement, as Zoë Kravitz proved at this year’s Oscars, though we’d never discourage anyone from a modern Mary moment, à la Hailey Bieber at the Super Bowl.

The opening of “Brilliant & Black: A Jewelry Renaissance” at Sotheby’s New York was a groundbreaking moment, not only for its format – curated by Melanie Grant, a London-based journalist, it was the first selling exhibit of its kind – but also for its recognition of 21 contemporary black jewelry designers by a global auction house.

The New Hall of Famers

The revolutionary spirit of the Art Deco movement, which flourished after World War I, brought us Cartier’s Tutti Frutti marvels and Gérard Sandoz’s geometric holy grails. They defined a period of innovation, cultural curiosity, and radical imagination. A century later the same is true of these tours de force. From Wilfredo Rosado’s lacquered tribute to East Africa’s Maasai tribe to Ana Khouri’s mastery of new materials like rare rosewood and rock crystal, the year’s best jewels were an exuberant celebration of just how far we’ve come.

The 12 signs of the Zodiac have long been ripe for talismanic inspiration. After all, hard times are made a little easier when celestial guidance is spun into diamonds and gold. Van Cleef & Arpels once again looked to the planets, newly reinforcing its astrological creations with fresh designs and stones like lapis lazuli and amazonite for an extra dose of good vibes.

The Migration of the Year – Moving to Palm Beach