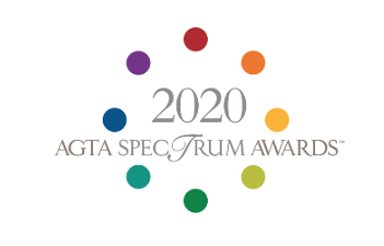 (DALLAS) – American Gem Trade Association (AGTA) recently announced that it would be returning to its traditional date pattern of October for the judging of its annual AGTA Spectrum Awards™ Design Competition. The judging of the competition will take place in New York City in the third week of October, with the Media Event taking place on October 26th.

The October date has proven to be more advantageous to designers submitting pieces into the competition, allowing those who have sourced their gemstones at the AGTA GemFair™ Tucson or AGTA GemFair™ Las Vegas sufficient time to conceptualize and create their entries. Additionally, AGTA has received feedback from many members of the editorial community, who attend the Media Day, that the August dates were often a conflict with summer schedules.

“Our annual AGTA Spectrum Awards™ competition is an extremely important component of our association,” explains Douglas K Hucker, CEO of AGTA. “Spectrum is always such an incredible showcase of color, and it is often an opportunity to discover designers and brands who may not have previously been on our radar. Giving more designers more time to create bespoke pieces in order to enter them into the competition will only serve to enhance what’s already a successful event.”

AGTA surveyed its members as well as designers who submitted pieces into the competition for feedback on moving back to the original date pattern, and the response was overwhelmingly positive about the move to October. The Dallas mail-in entry deadline is September 25, 2020 and the New York drop-off entry deadline is October 6, 2020.

On display at the upcoming AGTA GemFair™ Tucson, being held February 4-9th at the Tucson Convention Center will be the outstanding winners from the 2019 AGTA Spectrum Awards™ collection. Buyers at GemFair will also have the chance to vote for the last award to be given, the Buyers’ Choice Award.  Award-winners will be celebrated at the AGTA Spectrum Awards™ Gala on February 8th in Tucson.