A Harry Winston single-stone diamond ring, on offer at Bonhams Hong Kong Jewels and Jadeite sale November 27, is perhaps one of the very privileged rings in the world to have sparkled alongside Plácido Domingo, José Carreras and the late Luciano Pavarotti through many world-class stages. It boasts a type IIa diamond weighing 6.03 carats with D color and VVS1 clarity. It carries an estimate of HK $1,400,000 – 2,400,000, which translates to approximately $180,000 – 310,000 US dollars. 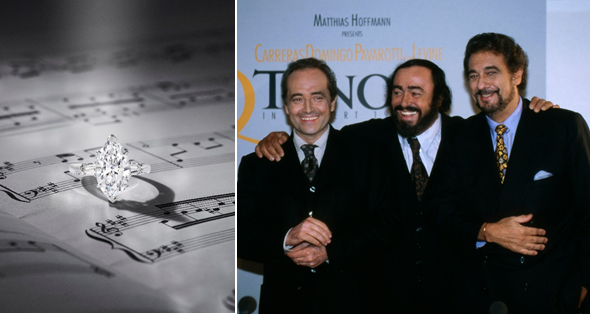 The special ring is a token of love between Tibor and Lee Rudas, who together changed music history by taking opera out of the opera houses to the masses. During the 1990s and early 2000s, the couple toured The Three Tenors concerts around the world, pioneering the open-air opera concert at football stadiums and amphitheaters. Over the course of 18 years, this ring was treasured and worn daily by Lee Rudas, who travelled and received standing ovations with Tibor and the three great tenors, from audiences at the Eiffel Tower in Paris, Hyde Park in London and the Forbidden City in Beijing, to the Hollywood Bowl in Los Angeles, the Metropolitan Opera House in New York and La Scala in Milan.

Tibor Rudas, whom The New York Times described as “help[ing] to propel the Three Tenors to global glory”, was born in Hungary. His early years were spent as a child performer with the Hungarian State Opera and later as a young acrobat and performer. While studying business at university, he was arrested by the Nazis in 1944 and taken to the Bergen-Belsen concentration camp. Surviving the war, he fled the post-war Hungary government and sought asylum in Australia, where he and his twin brother Andras founded a successful production company, organizing ensembles touring the globe and booking performances for Liberace, Dolly Parton and Frank Sinatra at casinos in Las Vegas. He then met Lee Rudas, a former ballet dancer and teacher performing with ensembles which went on to form The Australian Ballet. Lee, a gifted costume designer, applied her talents to glamorous and sophisticated costumes for the company productions.

The Bonhams sale of Jewels and Jadeite in Hong Kong will also feature highlights including:

Bonhams, founded in 1793, is one of the world’s largest and most renowned auctioneers, offering fine art and antiques, motor cars and jewelry. The main salerooms are in London, New York, Los Angeles and Hong Kong, with auctions also held in Knightsbridge, Edinburgh, Paris, San Francisco and Sydney. With a worldwide network of offices and regional representatives in 22 countries, Bonhams offers advice and valuation services in 60 specialist areas. For a full list of forthcoming auctions, plus details of Bonhams specialist departments, please visit bonhams.com.

How to convince Millennials to rave about your jewelry store