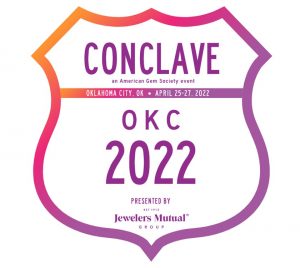 (LAS VEGAS) – Some of the top names on the speaker circuit will present at the American Gem Society’s (AGS) Conclave 2022 in Oklahoma City, April 25–27, at the Omni Oklahoma City Hotel.

“We’ve designed the content to both inspire and provide tangible takeaways for Conclave attendees,” said Alexis Padis, Secretary of the AGS Board of Directors and Chair of the International Conclave Sub-Committee.

On April 26, Molly Fletcher will be the keynote during the Tuesday Breakfast. Fletcher is a sought-after motivational speaker who delivers game-changing messages to top companies worldwide. She will share her proven approach to negotiating, teaching attendees to close deals faster, and strengthening relationships.

The Wednesday Breakfast Keynote on April 27 will be Cameron Hughes. Cameron is the only professional sports entertainer of his kind, having performed at over 1,500 events, including the Olympics, Stanley Cup, and NBA finals. Hughes specializes in helping attain peak performance.

AGS has curated a sterling lineup of featured speakers, as well. The Monday speaker will be Crystal Washington, who helps organizations leverage technology to increase profits and productivity. Her clients include Google, Microsoft and GE.

Tuesday’s featured speaker will be David Allison, founder of the Valuegraphics Database, the world’s first database to predict and influence behavior for anything on Earth. He also is a pioneer of “Values Thinking,” a term he coined and teaches as the best practice for organizational decision-making.

The American Gem Society recently announced that the “Small Business Turnaround King,” Marcus Lemonis, would be the opening keynote for Conclave.

To learn more about Conclave’s keynote and featured speakers, or to register for the event, visit ags.org/Conclave.

The American Gem Society would like to thank Jewelers Mutual Group for serving as the Presenting Sponsor.