JFC honors Drosos and Abramo at return of Facets of Hope

(NEW YORK) – Jewelers for Children (JFC) held their Facets of Hope event on Sunday August 29, in Las Vegas at the Venetian Resort. This year marked a return for the event which was cancelled in 2020 due to the pandemic.

“The past two years have certainly presented challenges to all of us in the industry,” said Debra Puzio, JFC board chair. “Having so many of our dedicated donors step up, both in 2020 with no event being held and this year with uncertainties still ahead, it’s been so gratifying to see the results of their support.”

The evening began with the traditional a cocktail reception, followed by dinner and the program. During the program, the organization recognized Virginia Drosos of Signet Jewelers, Ltd., and Mercedes Abramo of Cartier. Guests also heard from Jake Glaser, and Idelia Robins-Confer, representing the National CASA/GAL Foundation. 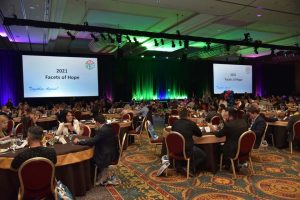 Jewelers for Children was founded in 1999 by the U.S. jewelry industry with the mission of helping children in need. Since its inception, JFC has donated more than $58 million to programs benefiting children whose lives have been affected by illness, abuse or neglect.

Learn more about Jewelers for Children at jewelersforchildren.org.