(SEATTLE, Wash.) – Kelly Newton, CGA, of Newton’s Jewelers in Fort Smith, Arkansas, is the recipient of the American Gem Society’s (AGS) most prestigious honor, the Robert M. Shipley Award®. Mr. Newton was presented with the award at the Society’s annual Conclave in Seattle, WA. 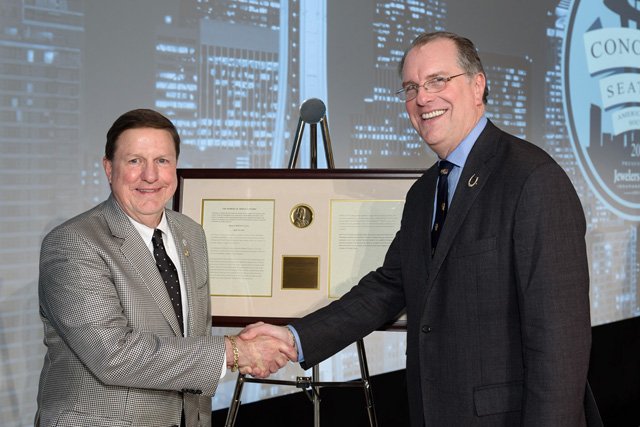 Newton received the award based on his commitment to the jewelry industry and because of his friendship and service toward the Society over the years.

“Kelly sets the standard for what an AGS Jeweler should be and what the Shipley Award stands for,” said Doug Parker, a past President of the AGS Board of Directors and current chair of the Robert M. Shipley Nominating committee. “He gives freely of himself to AGS, the industry, his community and his church. We are very proud to honor him with the 2019 Robert M. Shipley Award.”

Kelly Newton is the third generation owner and president of Newton’s Jewelers. He’s been a member of the AGS for 25 years. In 2010, he began serving on the Board of Directors and he has served as chair of the Membership Committee since 2014. For the past seven years, he has served as chair of the Society’s Grievance and Review Committee. Mr. Newton volunteers extensively in his community and supports many charitable and civic causes.

The American Gem Society would like to thank the Gemological Institute of America (GIA) for, once again, sponsoring the Robert M. Shipley Award® Luncheon.

For more information regarding the American Gem Society and Conclave, call 866-805-6500 or visit www.AmericanGemSociety.org.