To raise money for teachers

(DALLAS) – The box, small and gray and sturdy, sat in her closet for years, tucked away like a forgotten memory. She seldom thought about that case or its contents, which were awarded to her on a Saturday in September 64 years ago. The night Bert Parks crowned her 1958 Miss America on national television, in front of millions who suddenly knew the name of this reluctant pageant queen.

“Being Miss America gave me the springboard for everything I have done ever since,” the 84-year-old Marilyn Van Derbur says from her home in Colorado, which she has called home her entire life. “And I am grateful for it. But I do not live in the past.”

Except when people ask her about it. Last year, filmmaker Jay Pitts interviewed Van Derbur for an upcoming documentary about the Miss America pageant, which celebrates its 100th anniversary in December. At the director’s request she retrieved the box from its hiding place and revealed the treasures inside: her crown, adorned with Swarovski crystals, and its matching bracelet, both made by Schoppy’s of Atlantic City, N.J., which has made the jewelry for the pageant since its inception.

“They’re perfect,” the filmmaker told his subject, who had not seen the crown in years and had forgotten all about the bracelet – the only known example, she eventually learned from Pitts and the grandson of Schoppy’s founder. She realized at that moment these items were too valuable to sit in her closet. 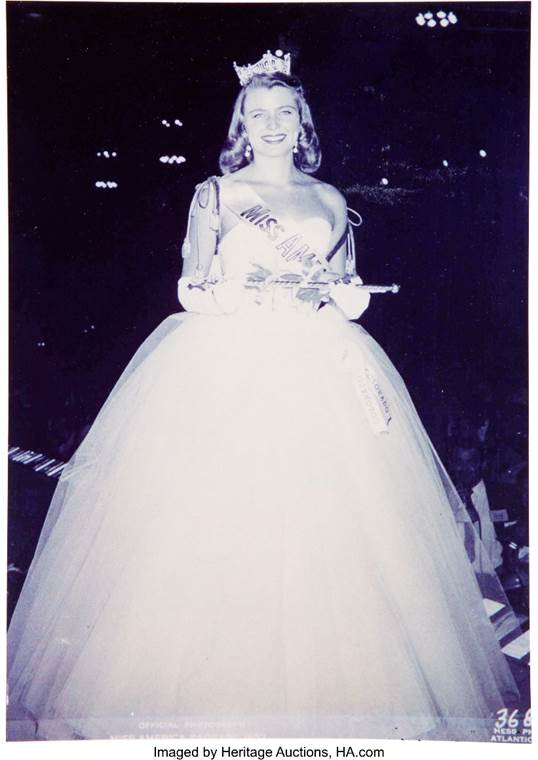 So, earlier this year, Van Derbur decided to sell the crown and bracelet, along with the trophy she received on Sept. 7, 1957, and the sequined Alfred Bosand gown she wore for the Miss America 75th Anniversary pageant in 1995. All of those stunning, historic items will be offered at Heritage Auctions Nov. 4-7 during the auction house’s Hollywood & Entertainment Memorabilia Signature® Auction.

This will mark the first time a Miss America crown has ever been offered to the public. The sale is historic – and, for very a good cause: Van Derbur says all the proceeds from her Miss America treasures will go directly to Colorado teachers whose lives had been upended by the pandemic.

“We give to one another in ways that we can,” she says. “I have something of value to offer.”

One should not be surprised by such a generous gesture. Van Derbur has spent most of her life giving back – as a motivational speaker and as an advocate for those impacted by childhood sexual abuse. In fact, it’s far more likely people know her today for that work than for the Miss America title bestowed upon her in 1957, when she was a student at the University of Colorado en route to graduating Phi Beta Kappa who was told, out of nowhere, she had been nominated as Miss University of Colorado.

“And when they told me, I didn’t even know it was a pageant for Miss America,” she says with a small laugh. “I said, ‘What do I have to do? Appear in an evening gown and what else?’ They said, ‘You have to show off a talent,’ and I said I didn’t have one. Then they said you have to wear a swimsuit, and I said, ‘No, I can’t do it.’ I had always been against the swimsuit competition.”

But Van Derbur did indeed have a talent: During the night’s event, she performed a medley of the songs “Tenderly” and “Tea for Two” on the organ, later admitting that was the extent of her prowess.

She returned to college, received her bachelor’s degree, then was tapped to become host of the AT&T-sponsored Bell Telephone Hour, the acclaimed musical variety show that debuted on NBC in 1959. She also hosted some 10 episodes of Candid Camera, and served for five years as a host for the Miss America Pageant. She also served as a spokesperson for Timex watches.

Those jobs were short-lived, because the male executives in charge expected something in return from Van Derbur. And there was not yet a #MeToo movement to protect women from the predators behind the desk.

I thought, ‘I don’t want to live in this world,’” Van Derbur says. “I needed to work for myself.” 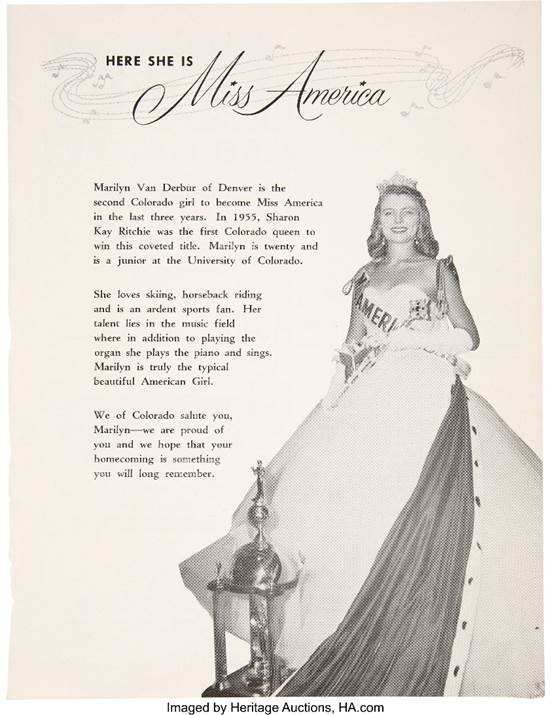 And so she became a motivational speaker and guest lecturer for such companies as United Airlines and General Motors. She spoke to teens, made award-winning films, accrued numerous accolades – among them, Outstanding Woman Speaker in America based upon the responses of 30,000 business and civic meeting planners – and was inducted into the Colorado Women’s Hall of Fame.

Her life was forever changed in 1991 when Van Derbur made public that she had been sexually assaulted by her father, a well-respected millionaire philanthropist, from the ages of 5 to 18. She had spent five years grappling with the long-suppressed memories: “During recovery I had to relive them as though they were happening in real time.”

In May 1991, that private pain became very public when it appeared on the front page of The Denver Post, initially against her wishes. Van Derbur had hoped to create and fund a program for the adult survivors of childhood sexual trauma without anyone knowing she was behind it. But in the end, she was willing to become the face of the oft-unspoken-about ordeal and its aftermath: In June 1991 she appeared on the cover of People alongside the headline “Miss America’s Triumph Over Shame.”

“Because sexual abuse is all about shame,” Van Derbur says, “I loved the privilege of being Miss America. But it became much more significant to me when I could help change people’s lives because I had been Miss America.”

She raised more than $250,000 to start a program for survivors of abuse, and in time was honored for her Exceptional Achievement in Public Service by the U.S. Secretary of Health and Human Services. She recently documented all of this in the book Miss America By Day, for which she was inducted into the Colorado Author’s Hall of Fame. Of the 1,900 books submitted to Writer’s Digest, Miss America By Day also won the magazine’s prestigious first-place award for Most Inspirational Book.

As far as she is concerned, selling her Miss America crown, bracelet, trophy and dress to help teachers is the only thing she can do – the only thing to do.

“I know the crown has value and can be something special to someone who may want to have it,” she says. “But the value is meaningful to me because in the process it can help at a time when teachers need help. I wondered why someone didn’t do something for them, and then I realized I am somebody! Everything was possible because I was Miss America.”

Keep in touch with Heritage Auctions at HA.com, HA.com/Facebook and HA.com/Twitter.