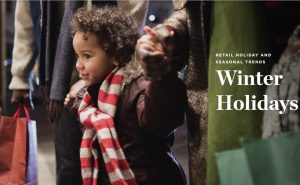 (WASHINGTON) – More than 148 million consumers plan to shop in-store and online on the last Saturday before Christmas this year, according to the annual survey released by the National Retail Federation and Prosper Insights & Analytics. The number reflects a slight drop from last year when 150 million consumers were expected to shop, but an increase from the 147 million expected shoppers in 2019.

“Retailers began preparations for the holiday season months in advance, offering seasonal inventory early and taking preventative measures to circumvent supply chain challenges exacerbated by the pandemic,” NRF President and CEO Matthew Shay said. “Consumers have responded with a growing eagerness to kick off the holiday shopping season early, and they expect to carry that momentum through the last few weeks of the year.”

With the date falling exactly one week before Christmas, the number of anticipated Super Saturday shoppers is the third-highest reported since NRF began tracking this figure in 2016. Just over a quarter of consumers (27 percent) plan to shop exclusively in-store and another third (32 percent) plan to shop online only. However, most (41 percent) expect to use a combination of the two channels.

While consumers plan to spend a total of $997.73 on holiday purchases this year, as of early December, they had completed roughly half (52 percent) of their holiday shopping. Still, many are aiming to wrap up their shopping early, with a record 42 percent planning to purchase their last gift before December 18. This figure is up from 40 percent a year ago and 30 percent in 2012 when NRF first asked this question. Even so, some procrastinators remain. More than half (52 percent) expect they will still be picking up last minute gifts in the week leading up to Christmas.

Nearly half (48 percent) of holiday shoppers plan to complete the remainder of their shopping online. Other top destinations include department stores (34 percent), discount stores (21 percent), clothing and accessories stores (20 percent) and local and small businesses (16 percent).

The most popular gifts purchased to date include clothing and accessories (44 percent), toys (30 percent), books and other media (26 percent), gift cards (25 percent) and electronics (20 percent). Just 23 percent of holiday shoppers plan to give a “gift of experience” this year.

Retailer efforts to mitigate the impact of supply chain challenges appear to have paid off. The majority (71 percent) of holiday shoppers say they have been able to find the items they are looking for most or all of the time. And optimism is high, with two-thirds (67 percent) indicating they are confident or very confident they will be able to find the gifts and other items needed for the holiday season this year.

“Consumers have responded to this holiday season’s supply chain challenges with flexibility,” Prosper Executive Vice President of Strategy Phil Rist said. “When shoppers do experience difficulty finding gifts, they take a proactive approach toward alternate solutions like checking another retailer, location or channel or identifying a substitute item. Additionally, some will choose to gift cash or a gift card or even wait to see if the item comes back in stock.”

NRF defines the holiday season as November 1 through December 31 and has forecast that holiday sales will grow between 8.5 percent and 10.5 percent over 2020 to between $843.4 billion and $859 billion. The 2021 holiday season appears to be on track to reach as high as 11.5 percent growth over last year.

The survey of 7,453 adult consumers was conducted November 24 through December 3 and has a margin of error of plus or minus 1.2 percent.

Read more about the 2021 holiday season at the NRF Winter Holiday Headquarters.