Cady Carlson Dill, an Oklahoma–based custom jeweler, has won the 2022 MJSA Challenge: Responsibly Sourced Designs, a competition/fundraiser that this year raised $7,000 to expand inclusivity in the jewelry industry. 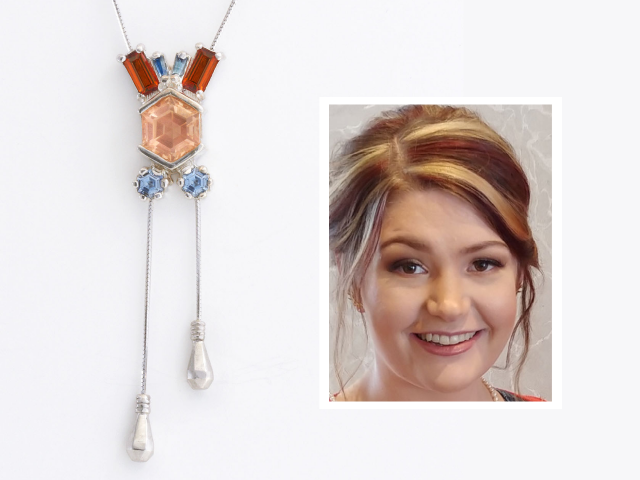 Held annually, the Challenge is co-sponsored by MJSA, the U.S. trade alliance dedicated to professional excellence in jewelry making and design, and Columbia Gem House, a renowned U.S. supplier of responsibly sourced colored gems. It invites select designers to render a piece of custom jewelry based on a fictional scenario and featuring gems provided by Columbia Gem House.

Dill’s winning entry, a bolo-style necklace, features an 8 mm Oregon Sunstone bracketed by Montana, Australian, and Brazilian sapphires. It was created in response to a scenario in which two sisters – one of whom had been given up for adoption as a baby – reunite after a decades-long separation, and one gifts the other with a piece of custom jewelry.

“I wanted to express their shared family history with the stones,” says Dill, whose Cady Carlson Designs in Tulsa, Oklahoma, emphasizes renewable, ethically sourced materials and specializes in updating family heirlooms for an international clientele. “The idea of family connections made me think of the double helix shape of DNA. I didn’t want to literally create that shape, but instead create something inspired by it.” She settled on a modern bolo where the stones, like the two sisters, “come together in the center.”

This year’s Challenge featured eight participating designers. Their entries were featured throughout the year on MJSA.org and in the alliance’s monthly magazine, MJSA Journal. In October, readers and site visitors were invited to vote for their favorite design in an online poll. In addition, Columbia Gem House donated stones and metal for the designers to turn their renderings into finished pieces, which were then auctioned off online.

The $7,000 raised through the auction will benefit Nest, a New York–based nonprofit whose mission is to support the responsible growth and creative engagement of the artisan and maker economy, and to build a world of greater gender equity and economic inclusion. The donation will allow for an individual to be sponsored through Nest’s Makers United program, which is meant to help support BIPOC jewelers in scaling their businesses.

“We wanted to select an organization that shared the beliefs of ethics and fairness, as well as [to] support those coming into the industry – particularly those who have traditionally had barriers to access,” says Natasha Braunwart, brand and corporate social responsibility manager of Columbia Gem House. “The maker community is the lifeblood of this industry, and we wanted to find a way to collectively support equality in the future of the space. The synergy we found with the Nest team really made them the perfect fit to be the recipient of this year’s fundraiser.”

“Participating in this project, whether it be designing, voting, or bidding, supports the wellbeing of the greater community within the gem and jewelry industry,” says Eric Braunwart, founder and president of Columbia Gem House. “It’s a reminder that the work you do can celebrate those around you and still make a positive impact.”

In addition to Dill, the designers were:

Kaelin Cordis of Kaelin Designs in Rogers, Arkansas, whose brooch includes a collection of ancient design elements, including spirals and granulation.

Lauren Davidson of Ellie Air Jewellery in Dorset, United Kingdom, whose clean and simple pendant leave the stones as the centerpiece.

Jamie Hollier of Balefire in Arvada, Colorado, whose pendant was inspired by an archway over a library at the university where the adopted woman spent most of her professional career.

For more information about the MJSA Challenge for Responsibly Sourced Designs and to see all the 2023 entries, visit MJSA.org.