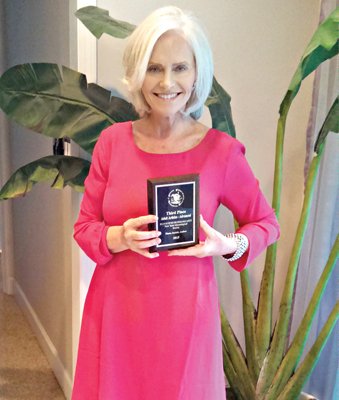 (NEW YORK) – Popular gem industry writer/author Diana Jarrett accepted an award from the American Federation of Mineralogical Societies for their Editors, Writers, Poets & Illustrators competition, reports the New York Mineralogical Club. Jarrett has already been the recipient of multiple awards as a journalist to the trade and myriad consumer outlets.

“I consider you to be the Best of the Best in North America,” declared Mark Nelson, Chairman of AFMS Bulletin Editors Advisory Committee. From the nationwide entries, the top 10 winners were announced through the New York Mineralogical Club. Jarrett ranked in the top 3 of that elite group for her in-depth reportage on the celebrated Russian jeweler, Peter Carl Fabergé – Uncovering Fabergé. “Your accomplishments that placed you as one of the Best in North America are something that should be an example to other bulletin editors in North America,” Nelson told Jarrett.

Jarrett’s distinctive voice in the diamond and gemstone world has made her one of the most sought after journalists in the industry. A prolific contributor to trade and luxury lifestyle outlets for years, she enthuses each audience with the same zeal she has for her topics. Her individualistic approach and easily recognizable take on gem subjects garners a global fan base. Jarrett adapts to each audience whether it be with laboratory reports requiring painstaking precision or her engaging views on trending patterns.

A long-standing member of the New York Mineralogical Club (NYMC) founded by legendary 19th century gemologist George Frederick Kunz; her articles have been a fixture in their NYMC Bulletin for over a decade. She’s a graduate gemologist from Gemological Institute of America (GIA), a Registered Master Valuer (RMV) and a member of the Association of Independent Jewellery Valuers (AIJV).