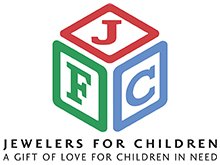 Officers to serve a second term


(NEW YORK) – The Jewelers for Children board of directors held elections at their semi-annual meeting in Las Vegas in June. Ten new directors were elected to the board and the current officers were re-elected to a second, one-year term. All terms will begin on October 1, 2018.

“I am thrilled to be re-elected as the chair of Jewelers for Children,” said Mortensen. “Serving for such a great cause, working with so many dedicated people, has been a very rewarding experience.”

“We are so fortunate to have had these talented individuals serve on the board and we greatly thank them for their service to the charity,” said Mortensen.

Jewelers for Children was founded in 1999 by the U.S. jewelry industry with the mission of helping children in need. Since its inception, JFC has donated more than $55 million to programs benefiting children whose lives have been affected by illness, abuse, or neglect. Visit www.jewelersforchildren.org for more information.