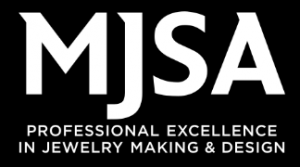 As part of its efforts to provide pathways for the next generation of professional jewelry makers and designers, the MJSA Education Foundation recently awarded a total of over $10,000 in scholarship funding to students preparing for promising careers.

Amor ($3,350 scholarship, including support from the Providence Jewelers Club) 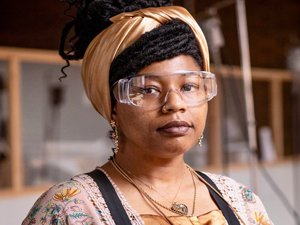 Amor, a student at Boston’s North Bennet Street School, is pursuing a diploma of excellence in jewelry making and repair. For Amor, jewelry making came as something of a “calling,” she says. She had always been interested in fashion, but in 2019 the idea of creating jewelry from metal took hold. With tools donated by friends, she created a studio from closet space in her apartment in Rockland, Massachusetts. There she watched YouTube videos and experimented, mostly creating copper and brass pieces freighted with symbolism. She soon began selling those early efforts, under the brand name Elegance Abstract, and also began taking classes at Metalwerx in Waltham, Massachusetts. After working “feverishly” at her own studio during the pandemic, Amor entered North Bennet Street’s Jewelry Making and Repair program in 2021.

Post–North Bennet Street, she wants to create a new business/brand called Djefau (the ancient Egyptian term for a transformed substance imbued with divinity). It will feature work that she calls “ancient futures” – eclectic designs with an air of antiquity about them. As in her previous efforts, her new work will have a symbolic, almost talismanic quality to it, with each piece conveying a unique message. “There’s a purpose for every piece of jewelry,” she says. “Symbols have meanings, and I ask myself who’s going to wear [the piece], how it should resonate for them.” Ultimately, she’d like to develop a mix of designs, from museum-quality pieces sought by collectors to pieces at more affordable price points, with the option of offering concierge design services. 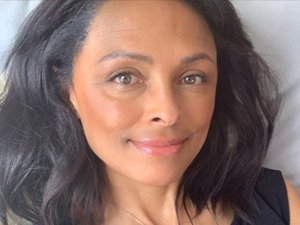 Lana Ogilvie anticipates graduating next spring with an Associate of Applied Science degree in jewelry design from the Fashion Institute of Technology in New York City. When she was in high school, she planned to be an illustrator. She attended classes at the Art Gallery of Ontario, and after graduating began fine art studies in illustration at Concordia University in Montreal. She continued that artistic pursuit for several years after graduation, a time when she also began a successful career as a fashion model and expert. She appeared regularly on runways in Paris, Milan, and London, and for many years was a fashion expert for Toronto-based television programs. But in the late 2000s, after learning how to repair a crystal beaded necklace that had broken, she was inspired to learn more about how to make jewelry. That desire led her, in 2010, to study to become a bench jeweler at Studio Jewelers Ltd., a trade school in New York City. A few years later, in 2016, she launched her own line, Sabre Jewelry. The Sabre collection features work – all handmade in her New York City studio – with lines that are fluid and sinuous, as if the metal were liquid and moving. Shortly after launching, it was among the brands accepted into the Designer and Agents trade show in New York City, and last year it joined the second cohort in the Natural Diamond Council’s Emerging Designers Diamond Initiative. While Lana intends to continue Sabre, she also wants to find a position with one of the leading jewelry design houses. Toward that end, she’s been studying design at the Fashion Institute of Technology (FIT) and diamond grading at the Gemological Institute of America. She credits her time at FIT with expanding her horizons: “I had been doing big, sculptural pieces, but now I’m learning how to work smaller and use stones with dainty cuts.” 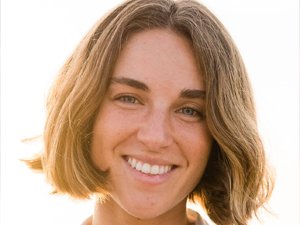 Sara Lundquist is scheduled to graduate next spring from the Gemological Institute of America in Carlsbad, California, with a diploma in jewelry design and technology. “Designing jewelry has been a hobby of mine since … elementary school. I would draw out the designs I had in my head,” she says. That early passion for jewelry has only grown. In April 2019, while still attending classes at Brigham Young University–Hawaii, Sara co-founded the Pacific Jewel Co, featuring silver and vermeil pieces (primarily rings) created at her private studio in Dana Point, California. Shortly afterward came Lundquist Fine, with designs made in precious metals and gems.

As that hobby has become a career, Sara has sought to deepen her knowledge. In 2021 she graduated from the Gemological Institute of America’s Graduate Jeweler program, then signed up for the Institute’s program in jewelry design and technology. Looking ahead, Sara has two goals. First, she wants to grow her brand and, in addition to developing more lines for retail sale, offer bespoke designs for a range of clients. Second, she wants any success she enjoys to also help others. She intends to donate a portion of her profits to fund GIA scholarships and assist other jewelry entrepreneurs and students in fulfilling their own dreams of a jewelry career.

The total scholarship amount includes a $2,500 grant provided by the Providence Jewelers Club.

The MJSA Education Foundation is a 501(c)(3) subsidiary of MJSA, the trade association dedicated to professional excellence in jewelry making and design. It supports career and training initiatives that help to ensure the jewelry industry maintains a qualified, competitive workforce, and since 1997 has awarded over $250,000 in scholarship funds.