Rio Grande was presented with a Gold ADDY award in the Business-to-Business category for the “For the Love of Jewelers” campaign, which celebrates the work of independent jewelers and metalsmiths. A Gold American Advertising Award is recognition of the highest level of creative excellence. This is the first year Rio Grande has submitted work to the competition. 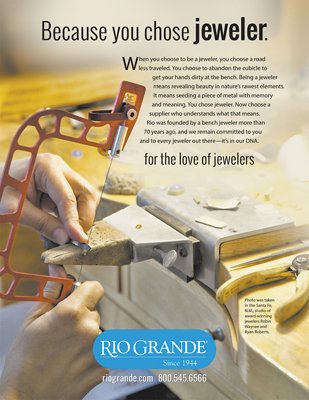 “We were delighted to take home a gold award the first time we submitted work,” says Jamie Gros, the creative director at Rio Grande. “Rio was founded in 1944 to serve and support jewelry makers. That’s the spirit we wanted to honor with this campaign. We’re thrilled that it resonates with jewelers and with those outside of the industry.”

Developed over the course of 2014, the campaign features well-known jewelers and metalsmiths such as Ronda Coryell, Shane Hendren and Tim McCreight. Through videos, print advertisements and digital landing pages, it tells the story of these innovative artists and applauds the verve of every jeweler who is forging a career by transforming raw metal into works of art.

“The campaign was created to feature the talent and drive of jewelers,” says Jamie. “Rio Grande wouldn’t exist without them, and their stories should be told. The jewelry they create has an impact on anyone who wears it. We’re lucky to play a part in their stories.”

Rio Grande plans to continue the campaign throughout 2015, featuring jewelry makers from across the spectrum of the industry and from throughout the United States in videos, written stories, print advertisements and social media campaigns. 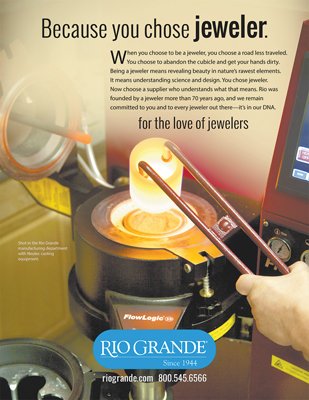 Among the largest worldwide suppliers to the jewelry industry, Rio Grande was founded in 1944 by Saul Bell, a skilled bench jeweler, a teacher and a mentor who supported metalsmiths and jewelers throughout his life. Today, Rio Grande is still led by the Bell family and remains committed to supporting jewelers in every way possible.