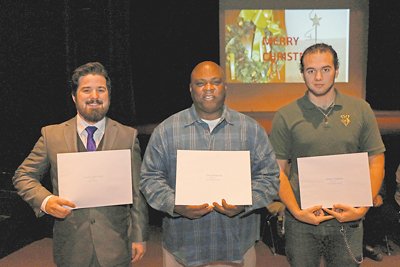 An awards ceremony was held for students attending the Texas Institute of Jewelry Technology (TIJT) at Paris Junior College at the end of the fall semester.

Downs was also the featured speaker. A 57-year-old mother of two and grandmother of three, she began her career in the field of nursing and taught high school. When she had the opportunity to attend a summer class at TIJT, she passionately fell for casting. “From there I dove head first into the classes offered in Paris,” said Downs, “and I have been involved in the industry, both behind the bench as a designer and behind the cases in sales.”

Downs went on to tell the students that she feels this is one of the most exciting fields they could have chosen. She also stressed that the most important part of the job is developing relationships. “You need to get your mind-reading skills set,” said Downs, “because you will have a customer standing in front of you saying ‘tell me what I want.’”

The Stuller Awards for Excellence were awarded next. Though begun under another name, this award has been continuously given for 27 years. Stuller provides a line of credit in differing amounts allowing winning students to buy tools and supplies. The $500 Platinum Award went to Tyler E. Neves, the $300 Gold Award went to Elizabeth Ann Dowds, the $200 Silver Award was presented to Jerald Andrew Joseph and the $100 Bronze Award went to Theresa Morin.

For more information about Texas Institute of Jewelry Technology (TIJT) at Paris Junior College visiting them online at www.parisjc.edu/.