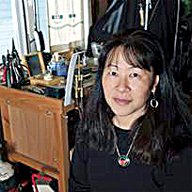 The annual Challenge invites selected designers to design a custom piece of jewelry based on a fictional scenario, with two stipulations: It must keep within an established price point and the design must incorporate one or more responsibly sourced gems from the Challenge’s sponsor, Columbia Gem House in Vancouver, Washington.

The scenario for the 2019 Challenge focused on a young woman intent on a legal career fighting human rights abuses in Africa, and who passed her bar exam on the first try – an achievement her parents wanted to celebrate with a special gift of jewelry. Nine designers undertook the challenge of creating that gift on a budget of $8,000, and a different entry was presented monthly on MJSA.org. Online voting took place during October, and the winner was announced in the December issue of MJSA Journal, MJSA’s monthly magazine.

Theresa’s entry, a forged 18k Fairmined palladium bracelet with gold accents, arranged the gemstones in a radiating pattern based on a West African folktale.

“During a search for inspiration, I happened upon the story of Ananse … a spider that stands for wisdom, creativity, and the complexities of life,” the designer says. “Ananse is often graphically portrayed as a center wheel with radiating spokes, which I loosely based my design on. With Sarah’s sense of fairness, I felt she would appreciate a design that strikes a balance without being symmetrical.” 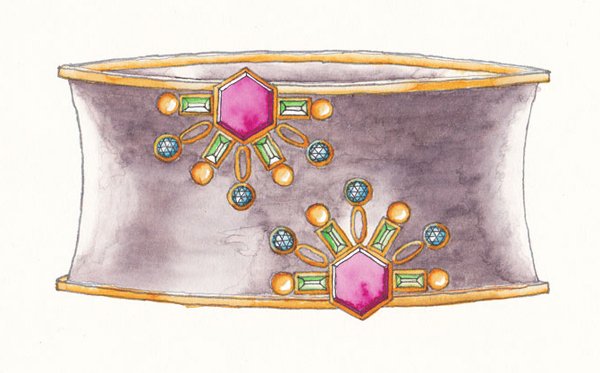 Trained as an architect (a profession she still practices part time), Theresa specializes in jewelry that is forged from recycled metals and exhibits “tremendous visual movement, reminiscent of a Frank Gehry structure,” she says. Her work has appeared in numerous publications and exhibitions, and her honors include a 2017 Niche Award in the silver jewelry category. A graduate of the Revere Academy in San Francisco, in 2014 she became the second designer awarded a Future of Design Education Fund Scholarship, sponsored by the Jeweler’s Resource Bureau.

The Challenge was sponsored by Columbia Gem House (columbiagemhouse.com), which since 1976 has been building a mine-to-market supply chain for ethical gems and has worked with governments, nonprofits, miners, and cutters to ensure safe workplaces, fair wages, ethical sourcing, and environmentally responsible mining.

For more information about the Challenge and to view the work of all nine designers, go to MJSA.org.