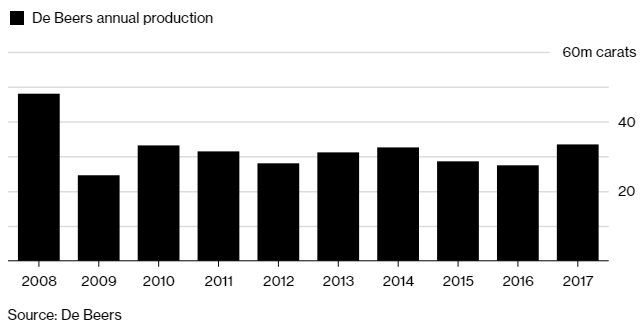 De Beers mined more diamonds last year than any time since the global financial crisis of 2008.

The company, a unit of Anglo American Plc, mined 33.5 million carats in 2017. That’s a 22 percent jump from a year earlier, beating its own target. Production was boosted by its new Gahcho Kue mine in Canada and better market conditions.

Still, it hasn’t necessarily been a bumper year for gems. Diamond sales at De Beers totaled $5.3 billion last year, compared with $5.6 billion in 2016, even though production was higher. That’s because the average selling price fell 13 percent last year to $162 a carat.

Read the all the details at https://www.bloomberg.com/news/articles/2018-01-25/de-beers-is-digging-up-more-diamonds-than-any-time-since-2008