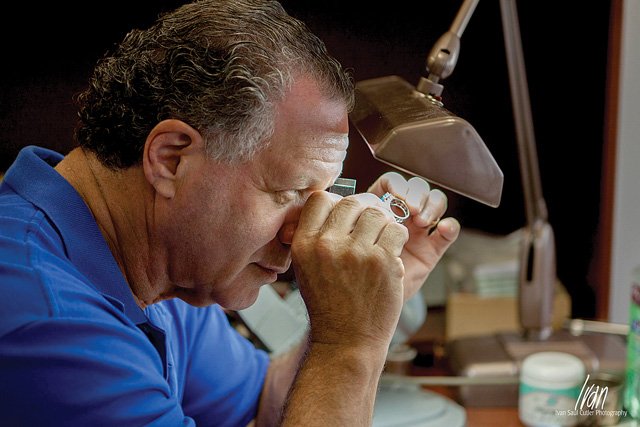 (GREENSBORO, N.C.) – A happenstance meeting between an established independent jewelry appraiser and innovative trust banking executive in Greensboro, NC led the bank (First Citizens Bank) to establish a unique system, centralizing in the Greensboro area all appraisals for estate jewelry from more than 500 branches in 18 states.

“When Michael learned I was a jewelry appraiser, he asked if I could conduct the appraisals under his control at the bank,” Kahn said. “When I responded affirmatively,  he thought we could do business and solve a problem bank estate departments face every day.”

What followed is First Citizen Bank’s tightly controlled on-premises procedures that increase security and efficiency. “This relationship gives us greater consistency and accuracy in appraisals from an independent, credentialed gemologist, also saving us a considerable amount of time,” said Krenz.

Kahn said he learned from Krenz that onsite jewelry appraisals are more efficient, prudent, and safe for First Citizens Bank, which avoids potentially costly and embarrassing risks when jewelry leaves the tight control of the bank for an outside appraisal.

Working with Jewelry Appraisers of North Carolina, First Citizens benefits from consistency. “When the appraisals are under our control in our office, we have no worries about inconsistency in valuing, unexplained loss or stone swapping, robbery or issues that can arise when jewelry leaves the control of the bank,” Krenz said.

First Citizens arranges for bonded secure couriers to deliver estate jewelry, watches and coins from its nationwide branches to an undisclosed, highly protected bank location. In a special room at the bank, Graduate Gemologist Kahn conducts a thorough appraisal.

“When Terry is appraising jewelry, two bank officers are always present as witnesses that the jewelry received for appraisal actually matches the inventory manifest,” Krenz says. “While dual control of all phases of our appraisal process assures security, the fact we are employing an independent appraiser provides significant peace of mind because we know for certain what we are safeguarding is what it is, and we know we have a reliable market value for future disposition among heirs.”

Another reason First Citizens employs an independent jewelry appraiser: Family disputes over value and material authenticity-integrity decrease or are eliminated.

“No jewelry store appraiser possesses the same insight and knowledge as Terry, whose decades of experience and no conflict of interest helps him establish an accurate fair market value, as opposed to an unacceptable, usually artificially high retail replacement value,” Krenz said. “What’s more, some heirs can mistakenly believe the estate’s jewelry collection contains valuable gemstones when the reality is a beautiful family ring or bracelet may only contain less valuable colored glass.”