(NEW YORK) – On Friday, November 7th, Russell Simmons’ Diamond Empowerment FundTM (D.E.F.), the year old charity whose mission it is to raise money for education programs in African countries where diamonds are a natural resource, held its first major fund raiser – Dallas Rocks 2008 – at Dallas’ Cityplace and it was a smashing success. 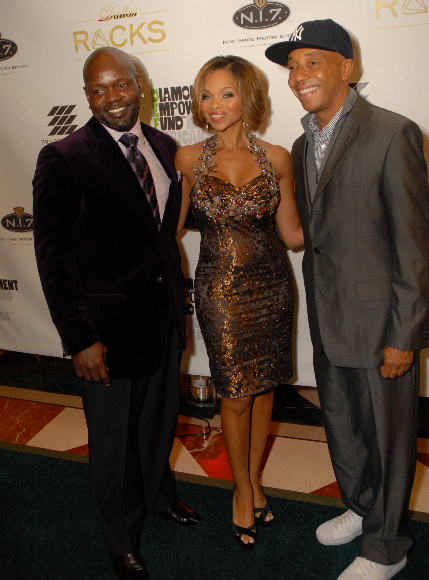 Celebrity participants Russell Simmons, Emmitt and Pat Smith, Earvin “Magic” Johnson and Terrell Owens helped to raise over $320,000, net proceeds of which will go to D.E.F. beneficiary the Community and Individual Development Association (CIDA City Campus) in Johannesburg, South Africa. Simmons presented Magic Johnson with the Humanitarian Empowerment Award for his tireless work around preventing HIV/AIDS, and Eva Longoria Parker received the Lonestar Empowerment Award for her long-standing work with special needs children and adults (accepted via videotaped message). Football great and “Dancing With the Stars” hoofer Emmitt Smith and his wife Pat co-hosted with Russell Simmons, and Emmy nominated television personality Suzanne Sena served as the Master of Ceremonies.

Magic Johnson assisted the auctioneer in rallying sports stars Smith, Owens, Olympic track star Michael Johnson and Simmons to buy the Dinner with Magic Johnson with his Personal Lakers Tickets package, of which Johnson offered several more than originally planned, each time pushing the energized crowd to donate another $20,000 for each dinner and eliciting riotous applause as each was scooped up. Retired NFL player Ray Crockett and wife April helped to auction an African Safari, which sold for $17,000. (PHOTO RIGHT: (l-r) Dallas Cowboy’s Emmitt Smith with wife Pat and Russell Simmons at the Dallas Rocks 2008 event. Photo by Doré Marcelle Madere.)

“We are thrilled with the outcome of the Dallas Rocks event and grateful to the Dallas community for opening its heart to D.E.F. and its mission,” declared Russell Simmons. “In these tough economic times, it was a blessing for our young charity to raise a substantial amount of money to support D.E.F.’s beneficiary, the CIDA City Campus. I am inspired every day by the work being done at CIDA, the only free college in South Africa, and by my experience of those young people who do everything for the school but teach and then take what they learn back into their communities. It’s a business model we’d like to replicate throughout Africa.”

Founded in 2007, the Diamond Empowerment Fund (D.E.F.) is a non-profit international organization with the mission to raise money to support education initiatives that develop and empower economically disadvantaged people in African nations where diamonds are a natural resource.